Hey! Check it out - A look inside of CLA's DAW - the plugin list!

Now that the disclaimer is out of the way, I find it REALLY fascinating to see what plugin libraries are getting used by mainstream mix engineers. But with CLA, what really caught my attention is what is NOT in his list! 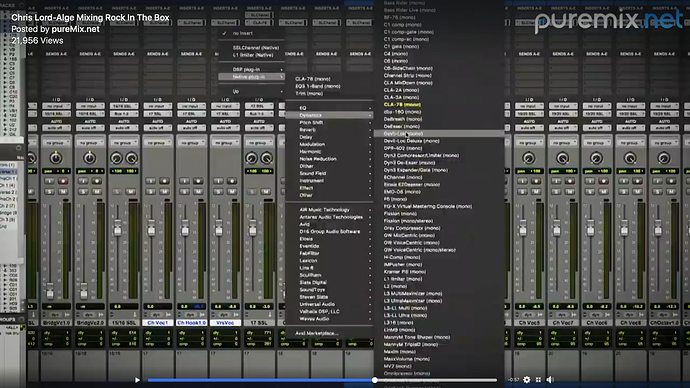 Slate, UAD, and Waves have an extensive amount of plugs, but I have to admit I was surprised to not see Izotope, McDSP and a few others.

Is that his own machine or is this one he used for the video? I know during NAMM, I get requests for NFRs for people to use in videos because they are using machines on loan and just need a copy of the plugins they need to make the video or do the demo. That would explain a short list.

Also, he emailed me a couple months ago asking for a copy of Imperial Delay because he needed to use it on a mix. So he either A) never installed it, B) used it then deleted it, C) did this video before getting it, or D) is using a machine on loan and only asked for the plugins he specifically needed for the mix.

Either way, there probably isn’t too much to read into a screenshot of someone’s plugins. Also, I’m personally offended that I’m not on the list.

Is that his own machine or is this one he used for the video?

I don’t know, and I wondered that myself. Its in his room, but that certainly doesn’t mean its his.

Either way, there probably isn’t too much to read into a screenshot of someone’s plugins.

I know… I agree. Its more a curiosity thing for me. And sometimes you see stuff you’ve never heard of, google it, and then end up buying it.

Also, I’m personally offended that I’m not on the list.

Lol… welcome to the world of entertainment production

You should have made him pay full price:sunglasses: Kidding. When Michael Brauer wanted to buy my PCM 70 a small part of me wanted to give it to him. The smarter part of me negotiated the deal

Either way, there probably isn’t too much to read into a screenshot of someone’s plugins. Also, I’m personally offended that I’m not on the list.

If it makes you feel any better, I saw your plugins for sale in my local Guitar Center.

Good call on D16, even though it’s a pain to install.

I’m still surprised there are Waves over some other brands, like McDsp. Also NI and IK is missing which is a surprise. Honestly though, with UAD plugs you can do pretty much the whole thing, so I don’t have a problem using his rig as is

I’m still surprised there are Waves over some other brands

He has his own signature line, and they modeled their classic compressors off of his rack units. He’s been Waves endorsed for a really long time.

Also NI and IK is missing which is a surprise.

Just out of curiosity, which NI plugin would he use that Waves, UAD, and Slate don’t provide? I’m not real familiar with the NI line… I have Ultimate and Maschine - I use their VI’s, but I don’t use their mix plugins.

with UAD plugs you can do pretty much the whole thing, so I don’t have a problem using his rig as is

I can mix comfortably with only Waves or only UAD.

I could almost do a mix with completely with Slate, (except that he doesn’t have an autotuner). And I’d have to use stock Avid plugins in combination with Slate, but other than that I’m certain I could do it if I had to. So I agree with you on that last one!!

Back in the day I also did everything with Waves and stock PT, can probably pull that off now if I needed. I’ve stopped using Waves about 10 years ago after something crapped out with their licensing while I was in a weekend session and couldn’t get to anybody for support. It was interesting…I had to do an album on stock PT plugins and outboard. I did it, it was an interesting experience. Anyway, dumped Waves, and have never looked back. For the most part I mix on stock plugins and Melodyne, and few select “color” plugins. Decided to wean myself off of anything that had a complex licensing scheme, plus keeping everything up to date became too expensive. I am sure CLA doesn’t have that problem

Maybe not so NI, but IK did some great modeling on the older rack delay units, also their production/mastering suite T-Racks is fantastic.

UAD probably does most of this anyway.

Cool! Yeah - Avid has really stepped up their stock plugins. They’re by far my favorite stock plugins out of all of anything on the market. I’d vote Nuendo as my 2nd choice, but you pay an arm and a leg for either of those programs.

I’d be happy to put the S1 Producer plugins against pretty much anything out there. $300 or thereabouts.
ProTools were ok, but last I worked on was ver.9. Last studio we used was also running PT9. Some of theirs are really good, others took a long time to get used to.
Last version of Sonar had some great plugs too, much better than PT imo. Their Sonitus series, at least I think that’s what they were called.

I’d be happy to put the S1 Producer plugins against pretty much anything out there.

If you compare the non-HD version I do think Presonus gives you way better plugins. I was surprised at how many plugins Avid left out of the cheaper version. The place where Avid has really improved their stock plugs at the non-HD level is with their virtual instruments, but that doesn’t help much if you need the DAW mainly for tracking and mixing lol.

S1’s plugins don’t hold up very well against the stock HD plugins, but the price difference makes that moot and irrelevant for almost 95% of the general market. I mean, if someone took the same $2500 they’d spend on PTHD, bought S1 professional 4 for $300 then spent the remaining $2200 on plugins, they could come out with a pretty comparable system so long as music is the only thing they mix with it

I think I’ve been using S1 for about 3 months now. I’ve gotten used to it. There’s a lot of things I like about it

Studio One - struggling with stock plugins in a real life mix Recording, Mixing and Producing

Brief update. So a client recently asked me to start using as many stock Studio One plugins as possible so that I could commit the non-S1 plugins then send the session back to the client for editing/automation etc… I still haven’t run into any major deal killers workflow wise. But I’m at the point where I can say I’m not real happy with the stock plugins. Here’s a few of the problems I ran into and how I tried to fight through them. As far as I know there are only two saturation tools in this entire library. One is the guitar amp simulator, the other is the Redlight Distortion plugin. This l…