Bash my plugins lol... and this song

$1000 for 3 plugins is enough to even make me think twice on buying them. I’ve spend many times that on plugins, but never for only 3 of them. I started playing around with the combination of the Kush Clariphonic, Empirical Labs Distressor (Arouser), and the LiquidSonics Seventh Heaven. My ears love them, but my wallet doesn’t

A while ago, took an old track that was sitting around and used only CLA Waves stuff to do the heavy lifting.

A little trick with the Waves CLA plugins Recording, Mixing and Producing

Chris said the Waves all-in-one CLA stuff was designed to sound good with the faders at zero. It just occurred to me, the reason why they sometimes don’t do shit at unity, is because of the INPUT level. Sometimes the same plugin will act very different based on how much income it sees. The Boz Panther is a great example of a plugin that doesn’t give a shit. The CLA does. So I took a Ukulele that was double tracked in stereo, warmed it up with a UAD 1073 preamp just for the saturation, then chased it with a CLA unplugged. Nothing…so instead of ramping up all the faders, I just ramped up the ma…

Here’s the track I posted on the other thread with the limiter removed.

So here’s what I changed today:

First I removed the CLA plugs.

I threw the Distressor on the Djembe drums and I really like what it did. I’ve spent hours today demoing the distressor against all kinds of 1176’s, the Pro-C, the Tubetech CL1B, Klanghelm, and a lot of other stuff that creates warmth through smashing and grinding yet stays clear. I can’t say the Distressor is better, but I can say I can’t get anything else do to what it does. It really really really excels at everything. Its great for drawing out long ringy sustainy kick and tom hits, but you have more control than with an 1176. But it can turn around and give a clear open transparent shimmer to a voice or a group of background vocals. So it can be as powerful as the 1176, as clear as an API 2500, as smooth as a Fairchild (well not really, I should say smooth LIKE a Fairchild), but more flexible than all 3. And the variable side chain filter on the plugin in amazing. As you all know, the one on the hardware version is fixed at 5k.

I used the Kush Clariphonic on a choir and piano bus Monday, and it was lovely. Today I dumped it on this Ukulele and I like what it did. The chain there is

Ukelele:
La-2a with 10-12db of GR to hold it in place
Clariphonic to add clarity and top end
Neve 1073 for saturation and high shelf with subtle boost at 1.6 and 100
Seventh Heaven room reverb 80% dry
Manley Vari Mu to glue the reverb back into the ukulele
S1 imager to widen things out.

Vocals:
Blue Bottle mic with the B9 capsule, going into a Blue Robbie tube preamp
First I nuked it with another Distressor, 8-10db of GR.
C6 multi band to control that shouty harshness at 4k
Waves R Vox to add another 12db of GR
Once again, Neve 1073 to add warmth and shimmer.

Parallel to an Eventide 910H for width 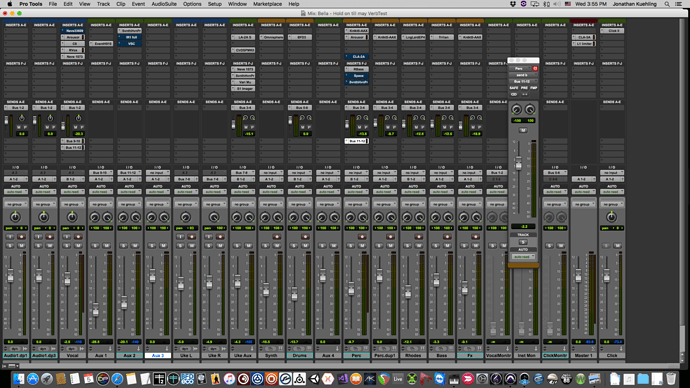 Here’s with the Reverb controlled:

And here’s with Reverb juiced for demo purposes

One thing I did conclude from hours of struggling is that Slate Verbsuite can not achieve the same level of control and focus as the Seventh Heaven Bricasti. And the Waves version of the Bricasti is a struggle to set up, because how many mouse moves you have to make tweak it. Also, the Waves Bricasti interface is disorganized, and you don’t have modulation built in. The closest budget tool I have to the Seventh Heaven is the Valhalla, and the closet pro tool I have is the Exponential Audio R2. The Fab Filter Pro R falls somewhere in-between the two in my opinion.

I think the AltiVerb is nearing the end of its time in my library, and I only use the Vienna MIR when I need an organic sound high quality 5.1 surround verb.

Whatever plugin you’re using for EQ I suggest you use it to kill the great swathes of 400Hz on the vocal.

There are also a few hefty edits in there that need smoothing out, 0.04 seconds for example.

Whatever plugin you’re using for EQ I suggest you use it to kill the great swathes of 400Hz on the vocal.

There are also a few hefty edits in there that need smoothing out, 0.04 seconds for example.

Good ear man. I wasn’t gonna do anything with this. This was one of my interns experimenting my microphone locker. I needed decent clean material to test run those plugs on. Much appreciated though!

Edit: I’ll actually go in and fix that though since you pointed it out

This was one of my interns experimenting my microphone locker.

ROFL A poor workman always blames his “interns”. Fess up JK, it was you.

AJ: did you hear it and know it, or did you see it and hear it both? It does sound better notched, just wondering if you can pinpoint freqs. that readily.

ROFL A poor workman always blames his “interns”. Fess up JK, it was you.

I didn’t blame an intern. She was the SINGER, and the point was experimenting with the mics. Yes. that was my editing mistake, but my point was that this was an experiment and wasn’t going to be published. But congratulations, you called me out on missing a crossfade.

AJ: did you hear it and know it, or did you see it and hear it both? It does sound better notched, just wondering if you can pinpoint freqs. that readily.

Oh, you can hear it. I was concerned about squeezing/pinching the low-mids too tight by notching the frequency. But listening to it with fresh ears today, I think it was the right call.

Bob, when I listen to something like this, I ask myself continuously through the process: "do I hear ‘artifacts’ that conflict with purity or clarity of the natural performance. This isn’t to say that a mix is only about clarity. But when you use tactics that make everything sound bigger, I always ask myself if making it bigger just caused unwanted problems too. Its the same in most cases with other instruments too.

So what I’m saying is I don’t typically sit and listen for numbers…like Hmmm. 500? Uhh…250? how about 1000? Its more like hearing a *problem then letting that guide you to the number. (If that makes some kind of sense).

Makes perfect sense. I was just wondering if AJ heard the buildup, and then went to a spectrum analyzer and verified where the buildup happened, or he just hears and identifies 400 automatically. Like perfect pitch for engineers.
I find when I’m doing my own mixes (which is rare) I’m getting better at hearing the problems but still have problems dialing in the corrections so I don’t thin it out too much. I’d love to be able to hear what I need to do and equate that to “3dB notch, narrow at 475” and be done with it.

I was just wondering if AJ heard the buildup, and then went to a spectrum analyzer and verified where the buildup happened, or he just hears and identifies 400 automatically. Like perfect pitch for engineers.

I use mine a LOT. Mainly when I make an EQ move, something different happens than I expected and I’m like WTF!!??

AJ: did you hear it and know it, or did you see it and hear it both?

I heard it, guessed at 400 - 500, then confirmed it on a spectrum analyser. I’m not brilliant at identifying frequencies exactly, but I can hear when there is something wrong, and roughly the area it’s in. Mids are relatively easy because an excess of them makes me panic.

I’d like to bet virtually nobody can do that - not consistently. As long as you can hear that something needs adjusting, you’re fine. It’s when you can’t hear it that the problems arise.

I wish I didn’t sell my Distressor!

I hear ya man! Those distressors and 1176’s are truly the swiss army knives of the compressor world!