This will pop us. Not sure how long the offer lasts. 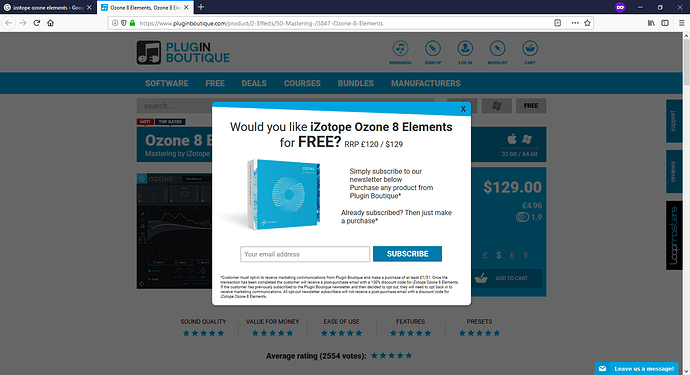 I bought a $2 plugin and received the coupon code for Ozone. Worked just fine.

Hey guys, this is a really good deal if you can go buy some $2 plugin and get elements. If the limiter in there is the same as the Ozone 8 version, then its a tremendously capable professional tool but easy to use. I’m gonna snag another elements license so I can have it on a second computer.

Thanks for the heads up! Checking it out now!

I bought my own plugin, and got a free version of ozone elements.

I bought my own plugin, and got a free version of ozone elements.

Haha that’s AWESOME! (I wonder if Steven Slate does that sort of thing?

I bought my own plugin,

Looks like there isn’t much to go with in Izotope Elements but I am seeing upgrade at Guitar Center to Ozone 8 standard for $99 that might be worthwhile. 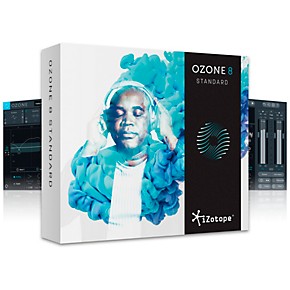 Shop for the iZotope Ozone 8 Standard Upgrade From Ozone Elements and receive free shipping on your order and the guaranteed lowest price.

I decided to get the W.A Production Puncher, hopefully it clears as I could use an upgraded Izotope mastering bundle, right now I am using the one that came with Sound Forge 10, which is a bit long in the tooth.

Do you mean in the way of features? I like the limiter a lot better than the PT, Cubase, Logic, or Reaper limiter. I would even use the scaled down version of it over the Waves L1. And I think the stock EQ in this is also easier to use than the Reaper EQ.

I’ve been using Izotope Ozone, Alloy, and Nectar for some time now, and I like them a lot. They play very well together, which I find helpful-- don’t have to micromanage settings, they’re already optimized to integrate with one another. Thumbs up.

For what its worth, I’ve found limiters to be sort of what-you-see-is-what-you-get type thing. There aren’t many settings in most of them. They seem to have different flavors - I like the Izotope one because I feel its incredibly transparent - it does an outstanding job preserving the mix with minimal artifacts.

I got it, so I’ll try some mixes with that in comparison. Only thing in Waves that I really liked was the Ultra Maximizer or whatever they called that limiter, it did a really good job. All their other plugins, I can do without.

I actually have a question about this stuff. Hey @bozmillar @AJ113…what is the ideal way to test a limiter? If you were to compare an Izotope limiter to an L1 or a stock Pro Tools limiter…how would you go about doing this? Looking for a simple and practical method without having to go too deep into the science end of the results if possible.

what is the ideal way to test a limiter?

Test it for what?

…to see if you like it better than another limiter.

Would you stack them up on a 2 bus and set a loudness meter at the end of the chain? Then when both are hitting at the same level on the meter a/b them? Then repeat with multiple different sources?

I’d think that would tell you how they are performing relative to each other. What I’m not sure is if matching the readout on the LUFS meter following the limiters is the ideal way to measure the differences in their performance. Basically I’m trying to figure out how to match them before comparing them by ear.

Honestly, to test limiters, I think the best way to compare them is to push them as loud as you like to push them and see which one sounds the best. Different songs/instruments need different styles of limiting, so I wouldn’t say that there’s a “best.” A limiter that sounds good on rock/metal might sound stupid on a piano ballad. And the other way around.

So scrap the metering and just use your own judgement on perceived loudness?

In the past I’ve judged these things based on transparency with the basic rule of thumb that less artifacts = better. I read somewhere this has most to do with the implementation of the knee and slew rate…is this correct?

So scrap the metering and just use your own judgement on perceived loudness?

Well, that depends on your needs. If hitting a certain level on your meter is important, then you should use a meter. If it’s not, then don’t.

In the past I’ve judged these things based on transparency with the basic rule of thumb that less artifacts = better.

I think that’s generally true, but not always. Sometimes the sound of limiting adds to the impact of the song. Sometimes it doesn’t.

I read somewhere this has most to do with the implementation of the knee and slew rate…is this correct?

Not really. There’s lots of stuff that goes into making a limiter, and slew rate isn’t really even part of the equation. Slew rate is for amplifiers. Are you referring to attack time?

In any case, a transparent limiter is going to have all sorts of stuff going on under the hood. From traditional compression to hard clipping to windowed clipipng/compression, multiband compression, etc.

When I made “The Wall” my main goal was to make each stage work as hard as it possibly could add too many artifacts. You get a whole bunch of compressors and limiters and clippers all working together in series and in parallel, and you can push things pretty hard without getting too many negative artifacts.