What is Your Guitar Rig?

I know that some people have very specific rigs for their tones. Just curious what you guys are liking these days. Are most people using amp sims? For me I am an amp and mic kind of guy. I need to cover a lot of ground so I don’t have one specific rig. I have pieces that I put together to get what I need for each project.

Favorite Pedals
I have a collection of vintage Boss DS-1’s and a hot roded new one.
Zake Wylde wah,

For amps I use a Mesa single rec as well :beerbang: and a Marshall Dsl. As well as a pod HD for modeling.

Guitars- Epiphone es339, Gibson les Paul studio, Fender Strat with a Duncan invader, epiphone les Paul gold top, fender showmaster, and others but I seem to be using these the most lately.

Pedals- I have a bunch but mainly just use a mi audio crunch box and a tone-wicker big muff.

Standard rig has been Marshall DSL 401 combo (40W, 1x12), and sometimes “Speaker Emulated DI Out”, and sometimes speaker out to Egnater Tourmaster 212x. I have quite enjoyed the Vox Valvetronix too, though a relatively low end product (12AX7 preamp + modeling amps) it makes some pretty decent sounds, especially for coming up with all kinds of different tones.

Favorite guitars are custom Carvin DC150 (neck thru, birds-eye maple neck) and Gibson Nighthawk (a Gibson/Fender hybrid if there ever [U]was[/U] one), BC Rich Bich (vintage), and Ibanez RGT42 (SuperStrat shredder, neck thru).

Don’t use pedals much, but I like the Fulltone OCD and use it on the Marshall clean channel sometimes.

However, after the “Purist vs. Pragmatist” Tone Thread debate on RR right before “the crash”, I decided to finally upgrade Guitar Rig (to GR5) so I could use it on my newer Windows machine. Wow, what incredible options and capabilities! I have been exploring that for weeks, and may well end up just going with GR for many things recording-wise. I was also still able to use my RigKontrol 2 (from GR2) foot controller with GR5. I’m really impressed a Mfr continued to support older hardware going forward! Really impressed with what they have done.

Solely ITB here, nothing but sims. I use my amp (a Peavey Vypyr 30W modeling amp) only for practicing. My go-to sims are Scuffham SGear-2, Amplitube 3&4, and CLA GTR. Also have the free LePou set but rarely go to them anymore. Ditto for some one-offs, like the Marvel Shred simulator that is built in to Mixcraft.

I can’t say that there is any particular setup I go to more often than others… I reach for the Martin 6 most often when I want to just play, but when I have something to record I decide based on what I’m after (well duh!). I’m not a live performer except when I bring the Martin to a party or family gathering.

I have AmpliTube 4. I’m not in a position yet to start building the studio in the garage, and won’t be for the foreseeable future.

Heavily customised Yamaha RGX312 (the 80’s rocked didn’t they???), fitted with two Entwistle Nemesis pickups, and a Roland GK3 pickup internally wired, feeding into a Boss GP-10 guitar effects and synthesiser. The sounds from these are then fed into Logic Pro X, where I have Guitar Rig and the built in effects of Logic. 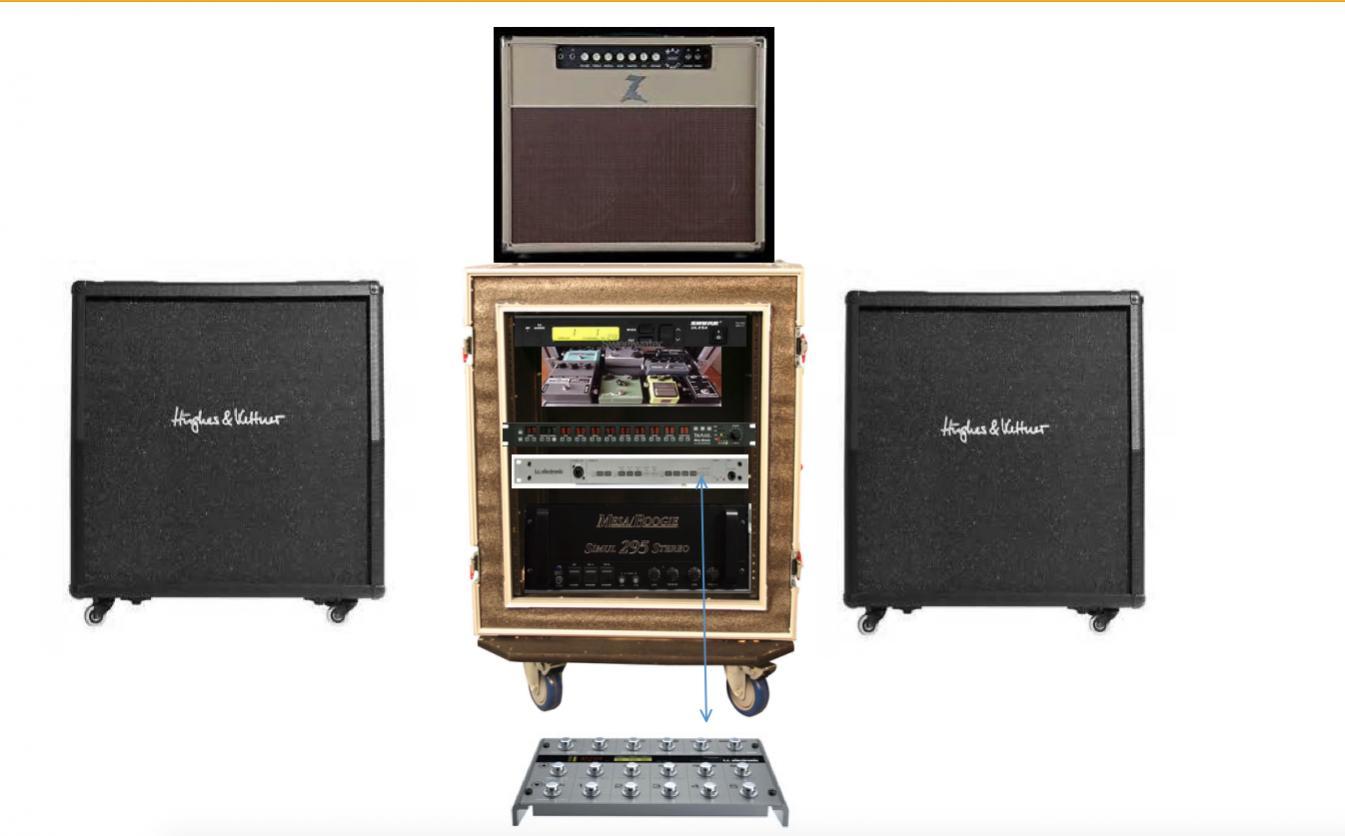 Rickenbacker into a Boss compressor stomp-box, then into a Roland Jazz Chorus 90 if playing OTB 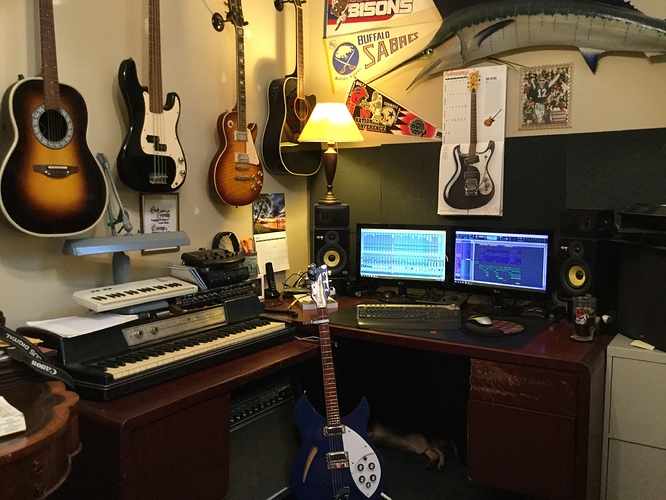 Wow. Nie to see some great rigs here. It is amazing to me much amp sims have come along to compete with physical amps.

Please ignore the dog under the desk. He actually likes to sit behind the amp when I play… and I wonder why he ignores me when I call

Is that a sail fish or a matlin? Looks cool.
Nice set up. Lovingbthe rickenbacker

I’ve built just about everything I own, gtrs, basses, amps and pedals. But I do have an old fender 85, a mesa studio 22 (modded) and an old silvertone twin… Also a couple of old peavey amps an cabs for bass. My main gtr amp is actually pretty ridiculous and with one or 2 pedals I can do whatever I want.
BUT…
When I record, I stay in the box. Even before I went “in the box” I was in the box of my Tascam 24 track… I used the sims in there for years. I found that no matter what amp/cab/mic I used, I still sounded like me. So I dug into the onboard dsp of the 2488 to find “unique” tones and went with them.
When I moved onto the laptop, I tried a bunch of sims and ended up using mostly free stuff until I bought Waves GTR3.
Also, even though I have upwards of 30 axes to play, 90% of everything I’ve recorded has been done with same axe. It’s probably the first “strat” ®

I ever built from like 1990 or so and it gets the job done. It just happens to be the gtr that I decided would be my “upstairs” axe way before I even thought about mixing up here in my loft. I save the “room filling” sound for when I have company… 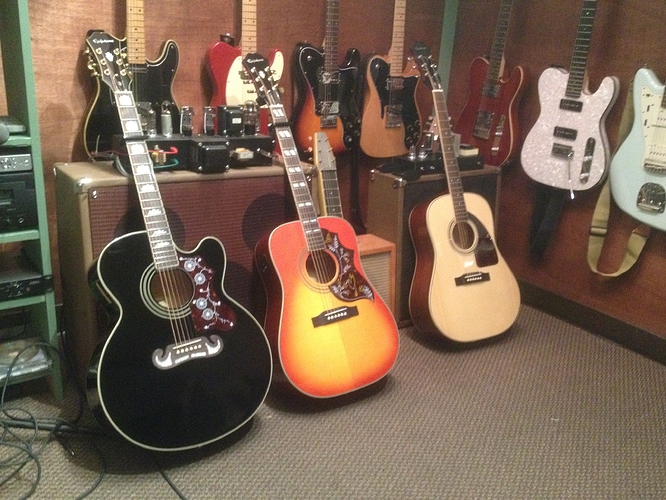 That is one handsome looking lineup…!

When I had my two custom acoustics built, I was able to visit the luthier many times while they were in work. Absolutely fascinating! My hat is off to anyone who can actually build a guitar…

Rich, if I ever make it to Jersey, I sure would love to pay you a visit.

same with the jazzmaster peeking out on the side. I was mainly trying to find a pic of the amps :beerbang: 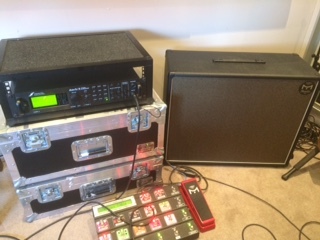 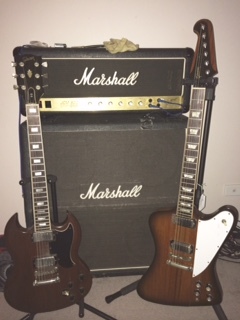