Mix With The Masters WINNER!

I’ve been sitting here demo-ing this thing against the UAD rev E for a good little while. I think its hilarious how the attack and release are backwards on the Overloud lol. 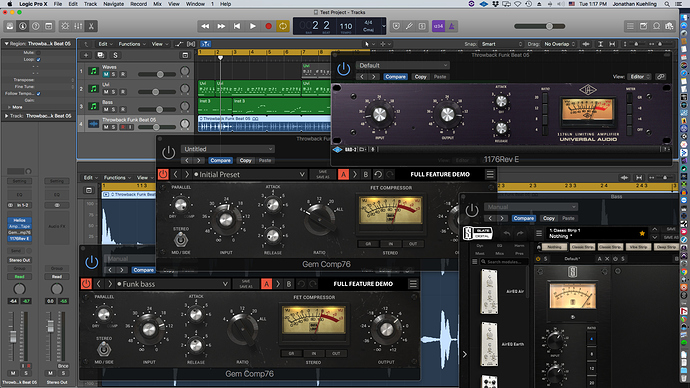 It took some extensive listening on a bunch of different stuff to really compare them. The meters and the knob positions are obviously different so you can’t just set attack and release at 12 and give them a whirl.

So the overloud is faster. When the attack and release are both set all the way fast on a 4:1 ratio, the attack is quicker than the UAD on the same settings. It seems like the overloud has a hyped top, the UAD has a heavily colored crunch in the mid range around 1k once the compression hits a certain peak, but it doesn’t get in the way if you’re aware of it. I would say the overloud has a tendency to be really smooth for an 1176 clone. The release is probably biggest difference between the two. And most evident when you squeeze/tighten/choke the back end of a transient on a drum hit.

Overall, I think its brighter, smoother, and cleaner than the UAD version. I feel its on a similar quality level with the UAD version, and that says a lot…I hold UAD very high regard when it comes to 1176’s. I would probably reach for it over the UAD for a delicate vocal or a transparent piano. And the UAD when you need some real thick grit and muscle. On a gentle intimate female vocal for example, it can be really tough to draw out the detail without faster attack and release speeds damaging the source. So I think the Overloud (at least for me) could become my go-to if I want a compressor that behaves like FET compressor but has the transparency of a high end VCA compressor. I’m really really impressed with this thing, and @AaronNarace, I’m glad you mentioned it in the other thread!

Nice test!!! I wanted that 1176 sound I was hearing but the closest plugin that sounds like it are those UAD plugins I hear on YouTube. When I hear those UAD, I go to the plugs I have but they don’t feel the same. I got Waves Cla-76 and Slate FG-76, Modern and Vintage, but they don’t have that vibe that the UAD got.

I did some research and found Overloud Gem-76 (I saw this a while now but didn’t pay it any attention). Saw the vid on Youtube and immediately got the demo to try it! It sounds better than what I have, I started using it on bass, vocals, snares, almost everything…lol.

I just found it bring things to life with compression, a lil excitement, a lil control. Don’t get me started on their TapeDesk. (https://overloud.com/products/tapedesk)

Today they released a compressor, a “Fairchild clone” (https://overloud.com/products/comp670-compressor-limiter) so I’ve been playing with that today.

You should check out Black Rooster VLA-2A (https://blackroosteraudio.com/pluginstore/plugin/vla-2a.html) against UAD LA-2A. That should be an interesting test!

Thanks for this comparison man!! I appreciate it much!!

I wanted that 1176 sound I was hearing but the closest plugin that sounds like it are those UAD plugins I hear on YouTube. When I hear those UAD, I go to the plugs I have but they don’t feel the same.

Honestly, UAD’s processing requirements royally suck. Those cards are pitifully weak, and you are constantly having to prioritize which tracks deserve the UAD plugins because you run out instances FAST. So even if you had the upgraded 2.0 versions of the 1176, you’d be using those Waves and Overloud plugs plenty. And the UAD ones are brutally expensive. They’re on sale right now for $150, but I paid $1000 for just the upgrade to the new 1176’s (which pisses me off but oh well). So until you make the dive into the UAD world (if you do in the future), I think that Overloud + Waves is a good place to be in. Andrew @ColdRoomStudio really likes the Slate stuff… that’s cool and it works really great for him. We all agree that he turns over outstanding mixes with it. For me though, those Slate 1176’s are incredibly messy. The Slate Distressor and that FC Red thingy are my favs in that set!

I can tell from that last thread you’re way more into tape distortion/saturation. I’ve been working with the UAD Ampex and the Waves J37 trying to become better acquainted with it. I currently feel I have a much better handle on console drives (SoundToys Decapitator, UAD Manley, SSL, Neve, Helios etc…). I use a lot of PSP, Izotope, and Fab Filter saturation too. But not the tapes emulators. When I toss a tape saturation on a channel I’m still pretty much at the mercy of the presets. Same with stuff like the EchoPlex. I didn’t grow up with any of that stuff and don’t have an in depth understanding of whats even going on under the hood. Every time I throw something on there I try to dial it in and it never sounds right to me. Either something else sounds better or its like I’m tossing a plugin on there for the sake of adding a plugin. But that’s certainly not a problem with the plugins. The problem is clearly me lol.