So this morning I woke up checked my email as normal, and saw a Facebook thread going off about the pre-Black-Friday sales at Plugin Alliance. I demoed the NEVE VXS emulator and immediately feel head over heels in love with it. I’ve been in BAD need of a Eucon formatted channel strip to replace the UAD Neve 88rs strip because it hogs an ungodly amount of RAM. I can get the Brainworx Neve placed on every channel of a choir and use it as if it was the stock Avid channel strip!

My go-to test project for plugins is stems from “Before it gets me” that @Cristina sent me a while back. Sensitive intimate vocals with a nylon string guitar, and the Neve sounded amazing. So after about 30 min of playing around with the Neve, I immediately downloaded the SSL E demo hoping that it would give me the same results. I have mixed feelings. 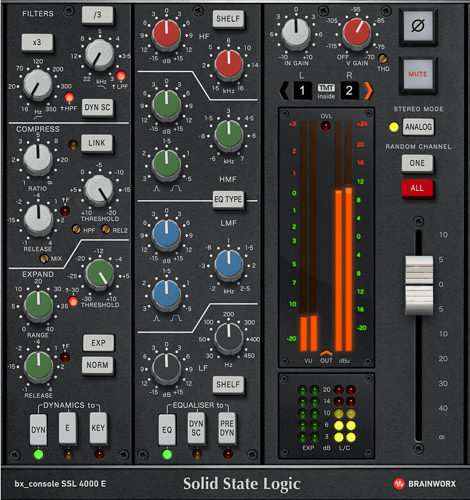 So when in real life, when a label pays big $$$$ to sit me down behind a real SSL, it almost always for pop country and for rock projects. I almost never re-counstruct a virtual mixer (meaning a bunch of channel strips in a DAW) using SSL’s for classical, cinematic, orchestral, or folk tracks. To me Neve is about pristine crystal clear “Hi-Fidelity” (as Skywalker says). Not that one console can’t do the other, but Neves always seem like they excel at mixes that favor extreme clarity over punch and power. The curve in the hi shelves are shaped differently, the gates have a vastly different feel, and the fixed attack in the dynamics section is distinct.

When picking an SSL emulator, to me it comes down to saturation and non-linearities. This is one thing that I think Waves got right way back when they did the first SSL E and G strips a long time back. I like the Brainworx SSL better than Slate, but I don’t like it as much as UAD. I would place it slightly higher than the Waves in my personal preference, but I’m not sure that $349 price of the Brainworx gives someone on a more limited budget a real clear cut value of almost 9x the price over the Waves version.

One thing I thought about was assembling a pick 10 package at Brainworx which would have dropped the price on the SSL E, SSL G, and Neve Console N strip to $80 each. $29 pr month for 29 months then own it free-and-clear at the end of the 29 months is a good deal, the problem is that you can’t just pay the $850 up front. I don’t want to be locked into this for 3 years because upgrades/updates are not included. The Brainworx SSL also requires a noise gate be placed after the unit if a compression chain follows. To fully exploit the non-linearities, the thing will hiss at you like a rabid snake when you hit the stop button on your DAW or in sections of a song where the music dies down or in gaps between sections in the arrangement. This isn’t a big deal on one or two channels, but when these things are strung across every channel on your mix, its pretty annoying. I never liked the G series in either the Waves or UAD, so I didn’t bother demoing the Brainworx SSL G. But that has to do with my personal preference more than anything else.

Slate everything bundle...is it worth it etc? Any snags?