Mix With The Masters WINNER!

Hey folks, we have a celebrity in our midst. I just got an email from the latest MWTM mixing contest for the song “Mechanical Moon”, and our very own @AaronNarace won FIRST PLACE!!! (I recognized his name from our last T-Racks contest.)

You can listen to his mix here: https://mixwiththemasters.com/contests/sonnox

Nice job @AaronNarace mix sounds great! Thanks for posting this @miked good to hear other members are .doing well .

Aw man! Those MWTM things are hard to win! Very nicely done. I looked at that contest and decided not to even attempt to mix that thing. Huge Congrats Aaron!

I entered which is why I got the email. Looking forward to getting home and listening to his mix on my monitors. From what I can tell, there were 330 entries, so yeah - VERY NICELY DONE!!

Thanks very very much!! I was very surprised when I got an email from them. I was speechless!!

I couldn’t believe it!!

Thanks for the suppose! I appreciate it!

Thanks very very much!! I was very surprised when I got an email from them. I was speechless!!

I could believe it!!

Thanks for the suppose! I appreciate it!

Great job @AaronNarace! I’d love to see you do a write up over here on what you did (if you don’t mind

That’s a great idea. I should really do that!!! @holster

I’m curious what you did with that piano.

Congratulations & well done @AaronNarace ! That was a pretty cool sounding track… Do you have a link where we can listen to your mix?

It’s the 1st one on the page I linked to…

Sorry I took so long to reply. The piano was already recorded great.

Here are some screenshots.

This PiAno_10 track is more of lil lines. My first plugin is a free reverb called SubSpace. I used setting “C” and 23% wet/dry mix 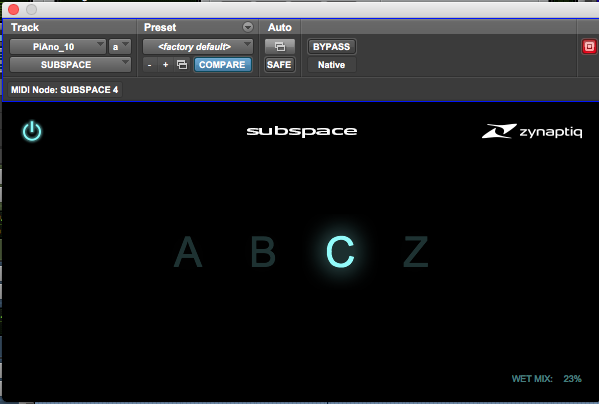 The other 2 plugins are just color. Softube Tape 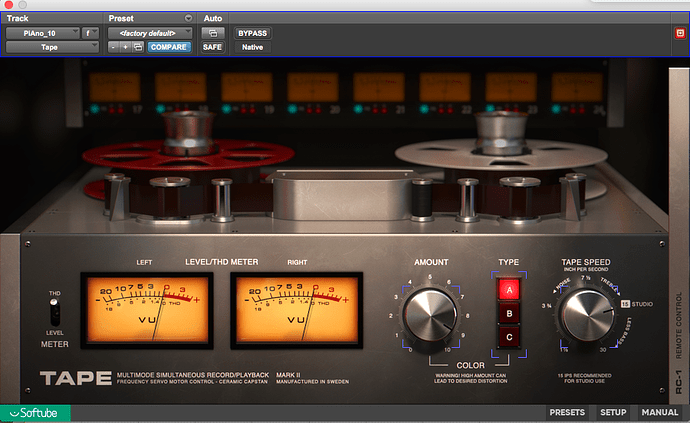 and VCC from Slate 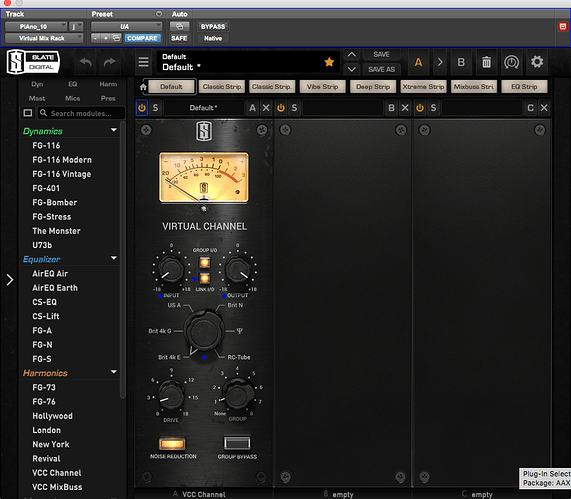 The Piano_09 track is the main Piano you hear in the song. I just Got Softube Tape and VCC again. similar settings

They are then bus to an aux called Piano where I got SSL Stereo Bus Compressor and S1 Imager from Waves. 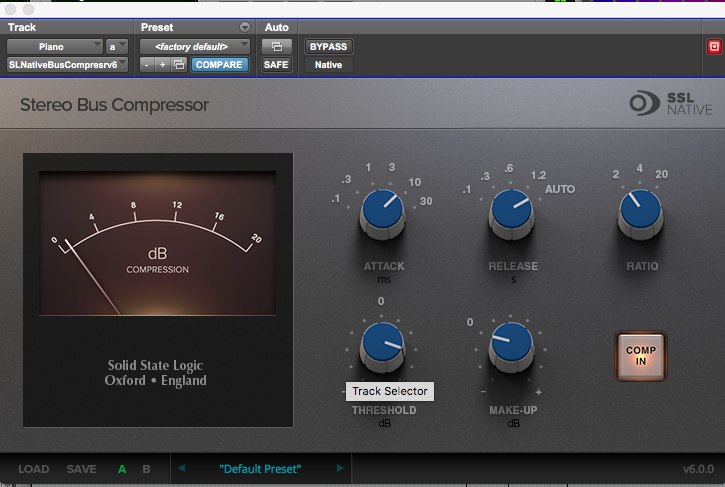 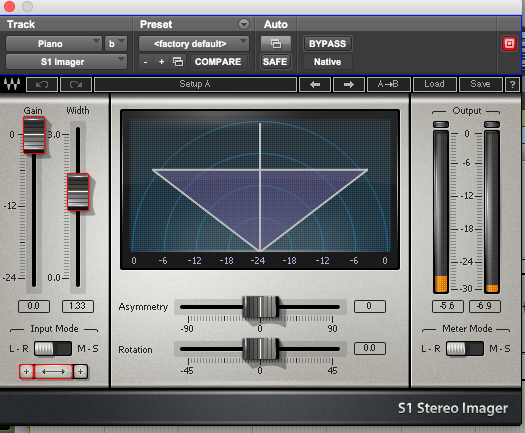 Then I sent the piano to a reverb 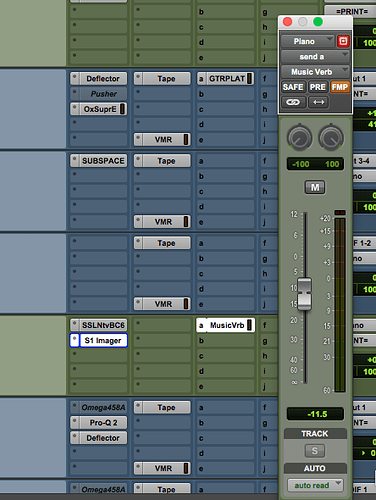 Here are the settings for the reverb Rverb from Waves 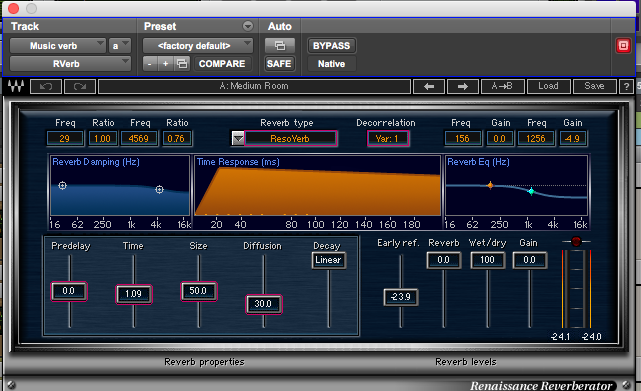 And that’s it. Other color must come from my Master Bus.

So I’m always changing plugins on my master according to the feel of the song. Sometimes this chain works, at other time, it’s horrible…lol

I eq first them Compress on the =Print= aux. it may seem crazy but I solo frequencies , the ones I don’t like, I cut them a little. In both mid and side 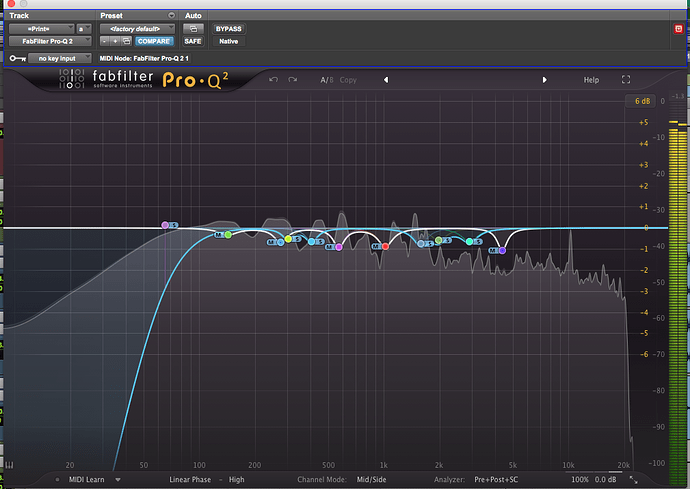 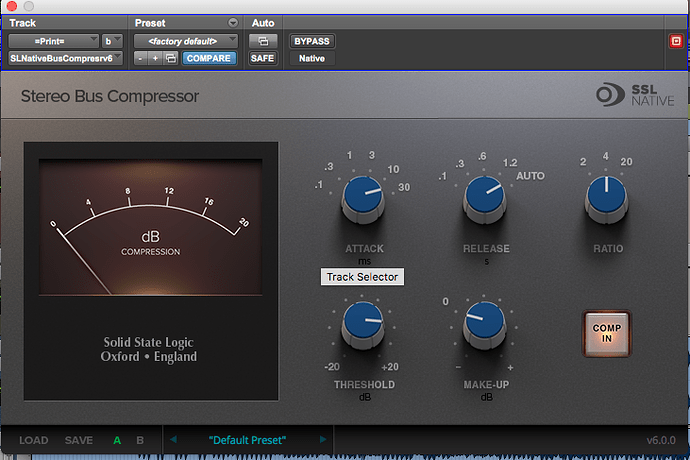 I boost a little with FG-N from Slate 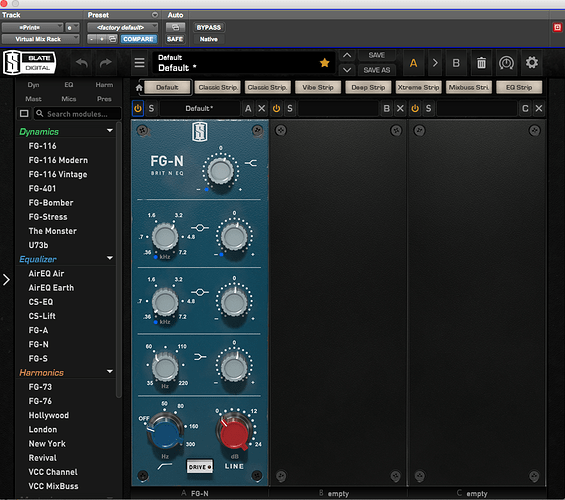 Some color from Waves PuigChlid (no compression) 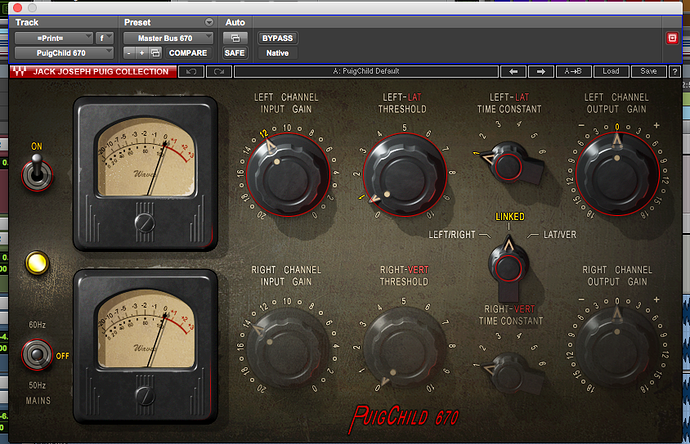 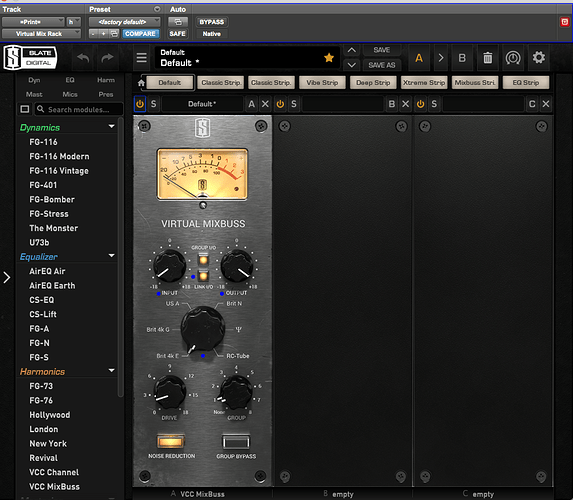 Then over to the master bus, at the end of the mix (which I rushed bc I saw the contest the day before it was gonna end) I wanted some more. So I tried some softube tape and it worked. 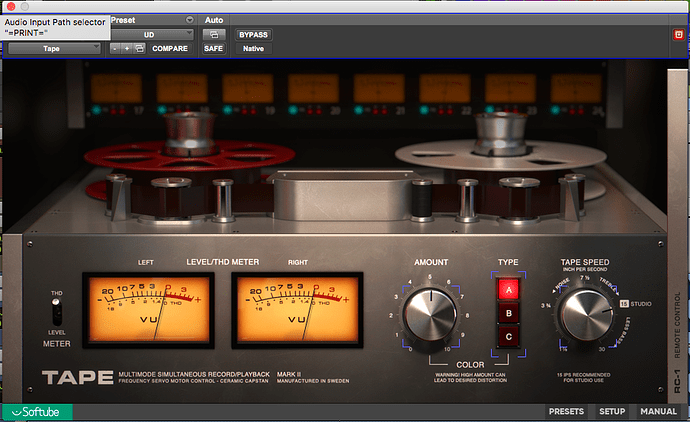 Then Fabfilter MB to tame the sub lows 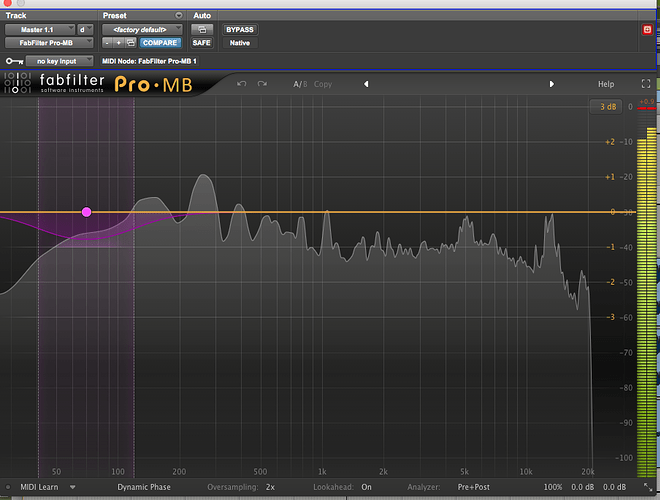 Then PSP VintageWarmer. I really don’t know what this plugin do but I think it’s a kinda limiter/compressor that kinda have a Tape(ish) sound… lol But it’s not compressing or limiting, I think it was there from my template…lol 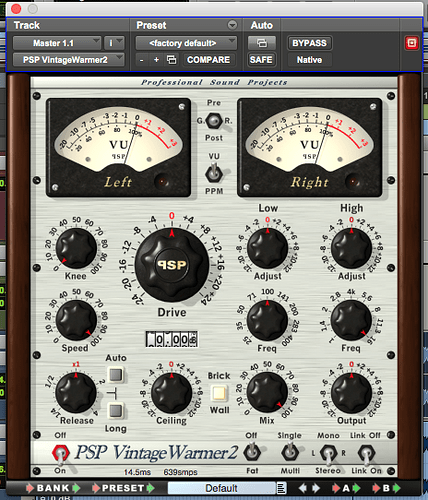 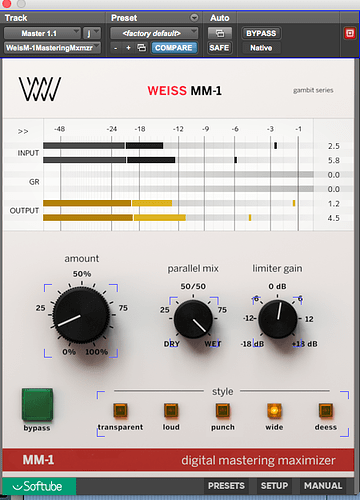 So, there’s a lot of color added but my master bus plugins, but each of them adds just a little so the total summed color is not too “fake sounding” or ugly…

I also was trying out Kush plugins, I was probably using that HammerDSP EQ and Clariphonic EQ(those are inactive on my Master Bus), but I don’t have an active subscription currently…lol When I get back with them I’ll show those settings, but the Clariphonic most likely was boosting the extreme air on top and the Hammer Eq was cutting some boxiness.

I hope this helps!!

Dude. That’s awesome. Thanks so much for sharing. Great use of saturation… and I didn’t realize SSL had their own plugin line now. Do you have the whole set or just the Bus comp? What do you think of them?

Nice trick with that Puig Child too! I forgot you can use it just for the heat. I gotta try that on the next mix!!

I’m not real familiar with the Softube family. I had a friend that was eyeballing a weiss for a preamp with an integrated DA converter. I’ll have to check that one out as well

I also was trying out Kush plugins, I was probably using that HammerDSP EQ and Clariphonic EQ(those are inactive on my Master Bus), but I don’t have an active subscription currently…lol When I get back with them I’ll show those settings, but the Clariphonic most likely was boosting the extreme air on top and the Hammer Eq was cutting some boxiness.

I have an active Kush set, but I might just buy the Clariphonic perpetual license and ditch the rest. I know the hammer is a one-of-a-kind design concept, but I’ve never gotten to the point where I could identify unique qualities of the floating q. I just can’t hear that much of a difference between it and some other EQs. I saw where you also have the Deflector, Omega API, and Novatron inserted. I love what Kush is doing, but I almost never reach for the Deflector over the UAD Distressor and the Arouser. I use the Distressor more which is terrible because I paid a full $250 for the Arouser. I cut my teeth training on the EL8 hardware units in college, so I’m really used to a unit that functions closer to the original. I think the Omega stuff is nice, but when UAD released the one-knob preamp version of the 1073 like the Omega N, I stopped using it. But I do use that Clariphonic religiously. I was using the Slate earth/air and the Eiosis for that Maag or Pultec style top boost, but currently the Clariphonic is my go-to for that job. Sometimes the Millenia too.

But yeah man! Thank for sharing. I think its neat to see how you largely left the EQ curve alone and just rammed everything up with drive. I appreciate you taking the time to do this… I certainly learned a thing or two

Glad I can help man!

I now reading through seeing some mistakes with my grammar. lol

I’ve only got the bus compressor from SSL. I got it for $50USD on a sale last year.

I see you got some UAD plugs, Nice!! One day I may buy them… lol

I recently got into Overloud.com plugins and BlackRoosterAudio.com plugins. Overloud got the best 1176 plugin I’ve heard (also saw some UAD user rated it up) and Black Rooster La2a and Pultec eq are crazy!!! Very smooth compression from their La2a plugin. Check those out for a cheaper alternative to UAD.

Let us keep pushing each other forward!

Have a great day

I’ll throw in a plug (pun intended) for Black Rooster too. Namely, the VPRE-73. It’s the first plugin I reach for when I want to add some saturation.

Black Rooster Audio is an eager software company from Germany that brings you premium quality audio plugins in AAX/VST/Audio Units.

This one is no slouch either.
https://www.thehouseofkush.com/plugins/omega-n

Nice!!! Yeah, that VPRE-73 is very nice!!! I’m simply blown away by these new plugin Devs! They sound soo much better than other larger Devs and their prices are so resonable!