He sent me an mp3 for possible collaboration and I worked on some lyrics and tiny synth twinkles. When I had some ideas, I asked him for the wav. files and he sent me 8 stereo tracks. It wasn’t until I was mixing that I realised that of course they were all filled with fx… (when I am in creative mode, such things escape my attention!) His track was called Tangibly Tangerine and has a wonderful ethereal slippery ambiance that I enjoyed… but how to slide my vocals into the mix???

So, rather than strip it back to raw and re-work, my options were to try to fit within a pre-mixed instrumental… I have added only a smudge of room verb to try to enable my vocals to slide within the mix…I have tweaked eqs and volume etc… as much as I can think to do…
Okay, enough chatter, please have a listen and let me know your thoughts. It’s a different way of working for sure, but working with what I have, how am I doing?

O… I uploaded it but can’t see an mp3 player anywhere… ahh, now I see one but the soundcloud link for hans should be a link to his profile page rather than one of his other songs…

I fixed it. You just needed to hit enter on the line before it (if that makes sense). It was treating it as space since there was nothing separating the text from the link(s).

and the soundcloud link for him came up different to how I thought, it has a song rather than his profile page… so I just took it away hehe… I now have an editor’s badge…[double grin]

Loving this Emma - just listening on an iPad speaker, but this rocks!

Cool stuff Emma! But there sure is some ballsy reverb on these tracks!

Amazing vocals as usual, this is a different ambiance than your usual, but it stills has you trademark vocals that you do so well! I love the entry tribal screams, very fitting.

I just find the vocals doesn’t feel like it’s living in the same space, but I guess there’s not much you can do since the raw tracks were printed with FX… I think it would have been easier with dry tracks to glue the whole thing together in one cohesive “space” - however big it is. As such I think you still did well, with the limitation.

A cool listen and a different take on your amazing voice!

Great job! >Now where’s the beer bang on this site? I miss it!<

yay… thanks Andrew! I was getting hung up on this one and then thought ahh to-hell-with-it I’ll print it and see if I can get some feedback… I suspect it’s the best I can do for now…
It was a fun thing to do, not at all the way I usually work so it’s great to explore different ways… thanks so much for checking it out!

And another Yay!! Thanks a bunch Patrick… that reverb was a funny thing, I simply didn’t notice it until I was mixing… it was quite tricky to slide the vox in as I have… yeah it does sound a bit separate still but without the raw tracks I think I’ve done my little best. Thanks so much for the kind words on my warbling… I did get into an emma-groove on this one… I was worried that Hans might be a bit startled but he says he loves it so I guess I’m about done with this one. It was really quite hard to fit a song into an instrumental but a good interesting challenge.

Collaborations can be curious journeys but it’s great to explore other musical paradigms from time to time. BIG thanks!

is the best I have for beerbang at the moment.

Such a cool song Emma! I’m already on my second listen!

Woah-skis this here, I like. Why are you not a houshold name?..really Fantastic job, for the both of you (you have a slight lead). Your voice churns from the depth of your soul, and his clangy poetic back-drop tries desperately to cage it in. This works together!

I tried using my secret powers to make the link show up awesome-r.

Thanks a bunch cpt!! You are very kind…
I often struggle with collabs but this time I found a place to dive into and got caught up into a lovely sense of his music… that got me into the zone and i love it when that happens. But as usual, once it’s recorded, I have no idea of whether it is of any interest to listeners… I’m so grateful for the feedback. This was a cool experiment.

Emma, I cannot let you go on like this, it is troubling . You notice the avatar icons? Click on somebody’s now…go ahead I will wait. Good, notice the little “card” that expands to reveal more info about the user? You have no picture here, it is like your creativity is scalded from your body. You need to fix this. Go to your user profile page (your top right avatar icon>settings>preferences)

In the preference catagory scroll down to the two big picture upload boxes. In the picture I have here, whatever picture you upload where the red circle is, that will be shown in your profile area above . Whatever pic gets uploaded where the green arrows are, this is the pic that will show up on your user card when someone clicks on your avatar. Now get creative! 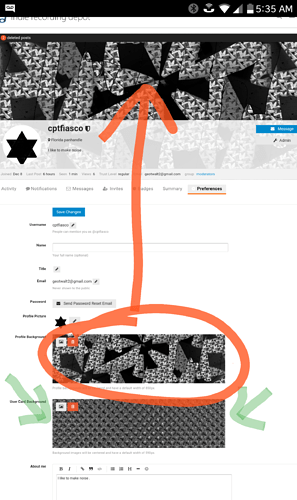 Wow - Emma this is great. You really nailed the vocals on this track.

The mix is good. Nice image and a good tonal balance.
Good job.

You really nailed the vocals on this track.

Right? It’s such an addicting voice to listen to!

Hi JayGee… great to see you here!
Thanks heaps for checking this out… it was a different sort of project for me and took me out of my comfort zone which can be a good or a bad thing…

I’m waiting for Hans to give it the okay then will pop it up on soundcloud.
Thanks again!

@Emma +1 on the user card. I can stop biting my nails now.

o yeah… heh… that is just a quick teaser… [wicked grin] O… sorry for those nails, they really are a mess… just saying… :drums2:

You most definitely have a skill that I will never have. If I was given this track and asked to put vocals to it, I wouldn’t even know where to start. You seem to have this perfect balance of knowing your voice and knowing how to use it really well. That seems to be a rare quality with vocalists.