I thought this was a relic of the vinyl age, but apparently it occurs digitally as well and is very popular within hip hop music. The act of making every frequency below a certain threshold (typically) 100Hz mono. The excuse in the old days was that it was nearly impossible to cut vinyl without doing it. That was a lie, it could be done, it just took significantly longer to perfect, and time is money in the industry. Some say that it provides low end clarity, but I disagree. I think it folds the mix inward and puts all the bass eggs into one basket leading to a cluttered middle. I’d like a consesus on what people think of the practice.

I’m no expert, but this can occur in a couple of genres – both hip hop and edm – and I have even seen specific advice in magazines (such as future music and computer music) to do this or “pan bass to the center.”

I was recently listening to an old Shadows recording of Apache – definitely not in either of those genres – and it had one guitar panned hard left, the other hard right, and the bass including kick drum panned dead center. So it is a practice with old roots for sure.

I think where hip hop and edm inherit this … is that edm never really fully left vinyl. It might sound crazy but a lot of dance music all along has continued to be offered on vinyl for use in clubs.

Anyway, the excuse used THESE days is that human hearing can’t really distinguish low frequencies that well in terms of separation, ergo panning to the center. Whether that is true or not, I have no idea.

As previously mentioned, I’m no expert. I see it as a creative thing and think the bass should be put wherever it works best for whatever is being created.

I’ve read a lot said in favor of collapsing low freqs to mono. Hell, our very own @bozmillar produced a plugin, Mongoose, that is designed to do exactly this, and for my money (literally) it makes a big improvement.

Izotope’s integrated suite of plugs has the same feature in all its stereo-width controls, where multiband adjustment is the norm. Those typically default to having the lower freqs with no spread (the width of that band and its cutoff are adjustable).

Doing this allows the kind of guitar panning @brutus mentioned to still be possible but takes the low freqs of those guitars and keeps them mono. I do buy the notion that human ears aren’t really capable of detecting directionality at those freqs.

I guess the question begs…what all do you have below 100hz that u want spread out wide?

I spread the whole lot out wide with stereo chorus most of the time. Hasn’t stopped our albums from being released on vinyl.

I’d like a consesus on what people think of the practice.

Used to do it when I had out of control karaoke tracks that rappers brought in. Not dealing with them anymore.

I have some other ways of controlling and focusing the low end of the mix:
-My kick and bass guitar get summed to mono (analog) anyway.
-If I use stereo widening, or imaging, I tend to use plugins that only widen at a certain frequencies at certain bandwidths.
-For pipe organs and pianos, I prefer to sum the individual instrument to mono instead of summing the entire mix.
-For reverbs, drum room mics, and overheads, I like to leave them in stereo, as that gives the kick drum a sense of space. Even though the direct mic is always summed mono.

In my view, nothing good comes from having low end panned in either direction. I slap Mongoose on the master bus of every mix and leave the crossover freq relatively low. For other tracks/buses, I’ll put it on and be more aggressive, depending on the sound. I like putting it on

This video shows the benefits of summing the low end to mono, especially in headphones. You can go to 2:40 to skip the history lesson and just straight to the example. I’ve been working on making my videos significantly shorter, so I’ll probably redo this one soon.

It also has the advantage of giving your full range speakers an easier time with the low end. If you have low freqs coming from just one speaker, even if your ears can’t hear the direction, the cone has to work twice as hard to make the same low frequency tone audible. When shared across both channels, they don’t have to work as hard. This is more of an issue with extreme panning though.

In my view, nothing good comes from having low end panned in either direction.

Indeed, but if you force it to be mono you can’t add stereo effects. To my ears, a mono bottom end only serves to make the recording flat and boring.

I’ve never heard this. If you do it right, you shouldn’t even hear the difference on monitors. Any system with a sub does this anyway. It’s on headphones that it really helps the most. And, of course, it all depends on how aggressive you are with it.

In my experience, it opens up a lot more possibilities with wide panning because you can pan things to an extreme L/R that you couldn’t pan before.

OK, so…[quote=“bozmillar, post:9, topic:1528”]
If you do it right, you shouldn’t even hear the difference on monitors.
[/quote]So do you think that if I take the stereo chorus off the bottom end of a bass guitar I will not hear any difference? What about a bass cab mic’d up in stereo panned hard right and left? What about a close-mic’d kick drum in relation to a pair of stereo overheads?

So do you think that if I take the stereo chorus off the bottom end of a bass guitar I will not hear any difference?

Depends on how aggressive you are with it. Once you get down low enough, you can’t really hear the direction it’s coming from anyway, unless you have headphones on, in which case I think it almost always sounds bad to hear low end coming from one direction.

What about a bass cab mic’d up in stereo panned hard right and left?

I would almost definitely either

B) Just sum the low end to mono. This would probably less good than option A because you can get phasing issues.

I can’t think of a time where the low frequencies of a bass bouncing around from left to right would give a positive outcome.

What about a close-mic’d kick drum in relation to a pair of stereo overheads?

What about it? Are you panning your kick drum? I can’t think of a single scenario where I’d want the low end of my kick drum panned to one side or the other. The high end? sure, why not.

Just curious if this means anything … Bachman-Turner Overdrive “Free Wheelin’”, the bass seems really wide and even the kick and drums really wide, all across the stereo spectrum. I have always liked this song and sound. Is it too much? Not hearing too much mono here in drums and bass, and it freakin’ rocks IMO.

As wide as that mix is, the low end is summed to mono (except for the little bass solo part, where it’s not summed).

Here’s a graph that shows the stereo width across the spectrum of the song. You can see exactly where it starts collapsing to mono, starting at around 350Hz. 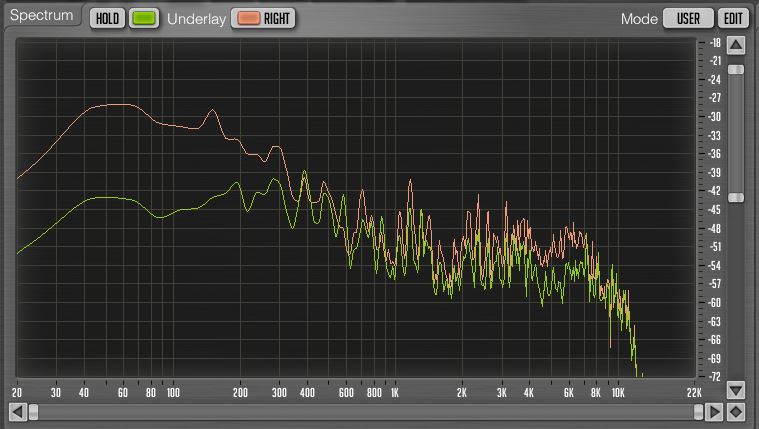 B) Just sum the low end to mono.

Boz, looks like what you’re saying is right inline with how the biggest studios are doing things.

I took a look a quick look at the master sessions from Thor, Xmen, and Divergent. I also pulled up the session tracks to the Metallica 3D mix down. Definitely mono. The digital summing matrix was set to funnel everything below 80 into mono. That also means the music, when folded all the way down to stereo was also summed to mono below 80.

Incase you are wondering, the DSP super core (thats the central computer) for my Avid console came from the big A room at Todd studios in California. They didn’t wipe the hard drive.

And to clarify, this means that even in a full 64 channel Atmos config, no one in the acoustics OR film world saw any benefit to mixing bass in stereo.

As wide as that mix is, the low end is summed to mono (except for the little bass solo part, where it’s not summed).

How did they do that (sum low end to Mono) in 1976? I guess they could do it on the console or some other methods. It sounds like there may be some effects on the kick and bass too, making the image of those instruments seem wider. Stereo reverb or delay, maybe even a Haas effect?

I wouldn’t imagine they did. They probably just left it alone. Maybe it happened when a vinyl print was re-released ‘digitally remastered’?

I would be really surprised if anyone double tracked a bass guitar and didn’t return all sources (Di/Cab/whatever) dead center.

I would be really surprised if anyone double tracked a bass guitar and didn’t return all sources (Di/Cab/whatever) dead center.

Well, BTO were Canadian, so you never know.