Recently, my wonderful wife of 29 years gifted me a new Macbook Pro M1 and a UAD Twin X Quad Interface. After many years, my faithful Windows machine was starting to show its age, and was struggling with larger mix projects (100 + tracks).

Having researched the transitional nature of the new Mac Silicon architecture, and knowing I have 15+ years of software history on my current machine, I was prepared for some pain in the changeover. I had heard a lot of horror stories. As a backup strategy, I had even purchased a copy of Logic Pro X, and was prepared to start anew, should the transition prove impossible.

Was the plugin thing a pain? Yes, but really no more than setting up a new Windows machine (which I have done before). I’m in the middle of an album project, so I need to make sure the mixes open on the new machine. It’s fiddly and time consuming, but it is gradually happening… I’ve become very patient in my middle age!

The UA interface is not officially supported for Apple Silicon, but I got it to work without too much difficulty. It is pretty awesome, especially the real-time recording console…

Oh, and BTW, Reaper works fantastically with it, and if I can install the plugin on the Mac, it works with Reaper… so there’s that.

…But here’s the thing, the M1 is absolutely blazingly powerful machine. For example:

…I had set up Reaper to request a buffer size of 32 samples to play some guitar through plugin amp emulations. I forgot I had done that, and opened a project that had 103 tracks and probably 250+ plugins on it, many of them very cpu hungry. Not surprisingly when it played, it was distorted and glitchy. I duly facepalmed myself and set the buffer size back to 256, and it played fine… and then I thought “I wonder…will this play at an even lower buffer rate?”… so I cranked the buffer size down to 64 samples… and… like magic, it played beautifully, cleanly without a gitch!

…Now keep in mind, this same project will only play at a buffer size of 2048 samples on my windows machine, and even then, sometimes it glitches!.. and that machine was no slouch by Windows standards… it is an i7 with 16Gb of Ram.

I think that illustrates just how powerful the new machine is! I’m really looking forward to being able to have full projects going, and adding a last minute overdub without having to jump through hoops to account for the high latency playback necessary on my old machine.

Nice one sounds great .I only have an i5 360 mgz cpu but i hardly ever get past 30 percent cpu for most of the stuff i do using any plugins i like .My older machine was also an i 5 with 16 gig of ram and now i only have 8 but never have any problems at all and it slaughters my old machine hands down for some reason so i really have no need to upgrade

The cpu is far more important than ram.Some people seem to think you need loads of ram and you don’t necessarily .

250 plugins ha ha ,made me chuckle

Sounds a bit extreme. Why don’t you just use bus group tracks

What sounds extreme? The mixes? Do they sound bad? We’re talking about 103 tracks here - that’s an average of 2.5 plugins a track. Some tracks have 5 or 6 plugins on them; many, many tracks have none.

Why don’t you just use bus group tracks

I do - they only add to the track count.

Great that you have a machine you have confidence in-- that’s key. My i5/16GB Windows machine has never broken a sweat at anything I do (rarely get above 25% system utilization), but I don’t have anywhere close to the number of tracks you do. I think the highest I’ve ever had is thirty or so. Not an apples-to-apples comparison (yes, I went there)…

I can do 80 ish tracks with not any problem with plugins etc .Im not interested in doing anything bigger than that.

You’re making me doubt my choices Andrew!
I had the choice to go down that route a few months ago, but decided against it expecting that I would have to ditch too many of my plugins switching to Mac. Maybe I should have waited just a bit longer judging by all the reports. I went for a very similar setup to Dave 's (I5 10th gen with 16 Gig RAM). Together with my new Quantum 2626 I can finally reach extremely low latencies. However a larger project I had up and running (about 70- 80 tracks, quite a lot of plugins) did glitch at 265 samples, so I doubt it performs as well as the M1.

Did you get the 8 Gig or 16 Gig version? One of the reasons for not chosing the M1 was the rediculous extra price for 16 Gig (about 400 euros I think). It just pisses me off…

I love my M1 Mac mini works really well with Reaper and Logic. Pro Tools completely blocked it, I can’t even try it beta.

I got the 16. At this point, I can’t penny pinch on a computer, I gotta make music. That is not a luxury everyone has, and I totally get needing to squeeze everything. For me it’s just that the computer is the necessary tool, and I know I’ll always need another one, so I budget and put a few bucks away each month for the inevitable. Oh and insure it.

You’re making me doubt my choices Andrew!
I had the choice to go down that route a few months ago, but decided against it expecting that I would have to ditch too many of my plugins switching to Mac. Maybe I should have waited just a bit longer judging by all the reports.

Sorry Evert, I just realized I forgot to reply to your post…

I went for a very similar setup to Dave 's (I5 10th gen with 16 Gig RAM). Together with my new Quantum 2626 I can finally reach extremely low latencies. However a larger project I had up and running (about 70- 80 tracks, quite a lot of plugins) did glitch at 265 samples, so I doubt it performs as well as the M1.

By all reports, the M1 is a pretty amazing performer, but it doesn’t sound like you’ve mad a bad decision. I think you’ll get a good lifespan out of your new machine.

I went for the 16 gig version… yeah it was pretty pricey, but I thought I might as well go the whole hog, so I wouldn’t regret it later.

I love my M1 Mac mini works really well with Reaper and Logic.

Hey Kevin - Cool! Yeah, I just have Reaper and Logic as well. Both work faultlessly, as do all the plugins I have up and running.

For me it’s just that the computer is the necessary tool,

I waited as long as I could before upgrading. It is a big step for me, because it is a totally new OS platform. I’m hoping I get a decent life out of it.

As developers, we’ve been pleasantly surprised by the support and performance of the new machines. In our tests, the new M1 platform kicks serious butt, while Rosetta 2 can seamlessly provide emulation for the last group of plug–ins that aren’t UB2 yet.

Our EQs are the last holdout, all the rest are done. We’re working on re–building their libraries for the ARM architecture, but what’s crazy kewl is that those legacy plugs are our most complex and deep (that’s why they’ve taken the longest). Yet, they sail right on through Rosetta as if they’re UB2–native.

A quick note from my dev team. Some very ad hoc but interesting benchmarks for a complex process we are working on now. These are start–to–finish processing times:

An order of magnitude faster on M1…crazy kewl.

Hey there, sorry to arrive late to the party (I’ve been out of the game lately) and post on an old thread but this caught my eye…

I have the twinX quad, and run a 2018 mac book pro and Logic. I’ve been eyeing a new MBP M1 but I’ve been a little hesitant for 2 reasons…

My current MBP’s fan runs all the time when I record, and since I’m just a bedroom player with no studio, that is a big problem on my acoustic recordings! Hows your new M1 for the fan? I don’t want to shell out the cash if the new MBP is going to be loud again!!

How are the UAD plugs working for you? I don’t think they are officially certified to run on M1 yet right? Any problems?

Finally, how much RAM did you get? I figure I’d probably buy the max RAM if I get it, just to be safe… any thoughts?

Thanks for your time and advice!!! Nice to be back here checking this place out again!

Hi Pirrie, welcome back - good to hear from you again!

Hows your new M1 for the fan? I don’t want to shell out the cash if the new MBP is going to be loud again!!

Unless I’m running projects with 100+ tracks at low latency, the fan doesn’t even turn on. The M1 architecture works very different to the earlier Intel Macs, and as a result, it runs much cooler. The M1 Mac Mini desktop machines don’t even have a fan, and the M1 MacBook Air doesn’t have a fan either. 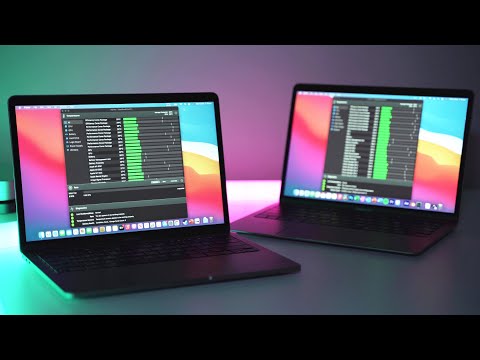 How are the UAD plugs working for you? I don’t think they are officially certified to run on M1 yet right? Any problems?

I have not had any problems whatsoever. You’re right, neither UADs plugins or their hardware are officially supported by UA for Mac M1. There is a bit of fiddling around to get UA’s Apollo drivers working. The key is to follow the instructions here:

On a Mac with Apple silicon, use the Startup Security Utility to change the level of security used on your startup disk.

If you try to hit up UA’s support for anything M1, you’ll get a tart “We don’t support it” reply. However, the UA forum has a whole thread devoted to it, with plenty of people using them successfully:
https://uadforum.com/macos-11-big-sur-mac-m1-sub-forum/51670-m1-test-v-9-13-1-a.html

Finally, how much RAM did you get? I figure I’d probably buy the max RAM if I get it, just to be safe… any thoughts?

I got 16GB of Ram. I couldn’t find a conclusive answer online as to how much I should get, so I just got the most I could. It works fine for me so far.

I’m using Reaper as my DAW, and it works flawlessly on my M1. I also have Logic Pro X, and that seems to work fine too (although I haven’t used it much).
My experience pretty much mirrors this guy: 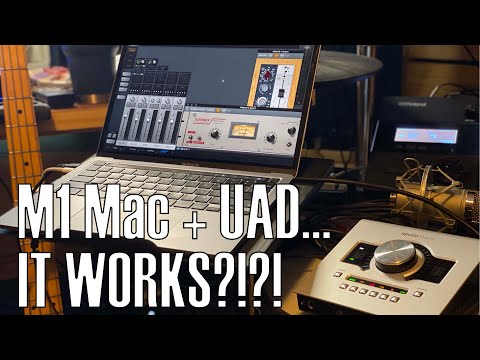 Amazing!! Thanks for all the info!!

It sounds really good, the last slight issue is that I wanted to keep an eye on the hard drive issues that I’ve been hearing about - I’m not a tech guy at all so I don’t really understand but I’ve heard the (SSD?) is writing/rewriting inefficiently and it’s going to reduce the life of the computer. I’m sure I just butchered that explanation lol but I was thinking of possibly waiting until the second generation of MBPs comes out with the M1 to give Apple a chance to fix any issues on the first run of this tech. Maybe I’m being overly cautious?

Either way- thanks for the info and insight! Hopefully I’ll have a new tune to ‘bash’ before too long, finally just getting everything set up again… been a long year…