Great song/video from one of our own!

Awesome tune from our good buddy @ptalbot. Be sure to check it out and share it!
Nicely done Patrick!

superb tune - superb mix and superb video. What a way to start the day!

It reminds me some sounds from Alan Parson (Project or production).
As talented as usual!

Some epic parts on that one too! Hats off!

Mixed by another of our good buddies, Andrew @ColdRoomStudio :


One of my favorites: (BG vocals by one of our buddettes, @Emma

Another of my favorites!

And of course, “It’s A Hurt” from the bashing thread. I thought I bought it on BandCamp but can’t find it anymore. (?) It’s on this forum somewhere…

Man!!! Those first 3 sounds good. Those mixes sound REALLY good… I love what he’s doing with his voice now mix-wise. And the instrumentation and mix are really sounding top-notch!

Hey guys! Thanks all for the kind words! I’m doing my best with my vocal to make it sound half good. Not really a singer as such, but I’m working with my limitations…

I’m pretty happy about this one too, when it comes to production:

As to “It’s a Hurt”, I’m going to release it later as a single, I’m still unhappy about the snare sound during the chorus on this one and need to work on that…

I’m trying to concentrate on promotion ATM, and have decided to release a new series of videos on Youtube that I think you’ll find interesting:

You might not learn much from these as I will not be going too deep into the multitracks of these iconic songs, but I’ll try to make it interesting to everyone, from newbies to simple music lovers/curious. But I think it will be fun. I’ll publish one new video every week starting this saturday, so hit that subscribe button if you want to see that!

Thanks for the heads up! Feel free to post links to those videos on here too. That’s the kind of content that incoming beginners and intermediate folks will love to see!

I have already 15 of these videos, as I need to be able to keep a steady pace.
Chicago, Talking Heads, The Cure, Norah Jones, Huey Lewis & the News, Alanis Morissette, The Who, The Police, Cindy Lauper, Santana, Queen, The Kooks, Blondie, Dire Straits, The J. Geils Band.
A lot more coming… spanning many genres and era.

The idea is to be found in searches with these bands and songs, to grow a following and later to be able to push more indie stuff, talk about the music industry, do some reviews and interviews.
It’s all about gaining some influence with the “regular” public, to be able to push less well known music and artists that need more recognition.

Mixed by another of our good buddies, Andrew

And mastered by yet another

Indeed? Very cool! Now I know another name to be on the lookout for!

Nice! I have a confession to make. I finally got the connection between the icon/avatar and “ghostly beard”. For a long long time I thought that symbol was supposed to be a Batman flying saucer or something, the middle part being the “windshield”. Ha, I figure a few people will get a big chuckle out of that.

But in my defense, it’s one of those Rorschach test things … you see what you want to see.

I agree it looks better as a ‘bat with ears’.

@ptalbot hey man… can I ask what software that Rhodes sound came from on “How Does It Feel”?

Hey Jonathan! I generally use Applied Acoustics Lounge Lizard on my tunes, but I think on this one I’ve used Spectrasonics Keyscape, perhaps both actually, as I often layer Rhodes sounds with something else.
I’ll check later and will tell you exactly.

I found the icon and licensed it from https://thenounproject.com/

What I like about it is precisely that it’s vague enough that it can be seen as a ghost or a beard, or a UFO or a bat or whatever you want to see in it, like a Rorschach test.

I chose not to show my face as a reaction against our selfie obsessed society and use this logo for all my communication. Also, let’s face it, my face wouldn’t be selling much nowadays!

I’ve had countless people asking me to do tee-shirts with that logo, which I might do one day. I just don’t feel too much of a tee-shirt retailer though…

I chose not to show my face

In one of the videos, I can’t remember which one, there was a guy walking and he had a mostly silverish beard, so I assumed that was you. That’s when I made the beard/UFO connection.

Give the people what they want!

Ha, most people try to sell people stuff they don’t want by marketing the crap out of it. You have a ready-made market lining up and demanding supply. Why not sell shirts and other merch and donate the proceeds to your favorite charity? Maybe even the indie music recognition project you’re working on. It’s a cool logo, I think you’re onto something.

In one of the videos, I can’t remember which one, there was a guy walking and he had a mostly silverish beard, so I assumed that was you. That’s when I made the beard/UFO connection.

Nope, not me. It was an actor. Actually some people are actively searching the internet to find pics of me. They are stalking me on FB and other social medias, but I’ve never published a photo of myself

Give the people what they want!

Ha, most people try to sell people stuff they don’t want by marketing the crap out of it. You have a ready-made market lining up and demanding supply. Why not sell shirts and other merch and donate the proceeds to your favorite charity? Maybe even the indie music recognition project you’re working on. It’s a cool logo, I think you’re onto something.

Yeah, I’m not saying I won’t do it. Just that it wasn’t a priority. I think the logo looks cool, so I will probably do something about that of these days… There are various online sites that can be used to build a merch store with no initial funds and no stock/shipping headache. They take a big percentaqe of the price though, so it ends up being pretty pricey for fans. I’ll have another look after I have that new video thing rolling.

Actually some people are actively searching the internet to find pics of me.

Ha, give them this, it still retains the mystery 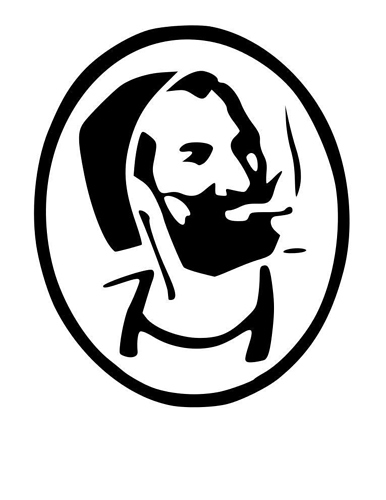 Since I’m French, I’ve used this little guy in a couple of video interviews (and the tee-shirt is a limited edition that my daughter gave me!): 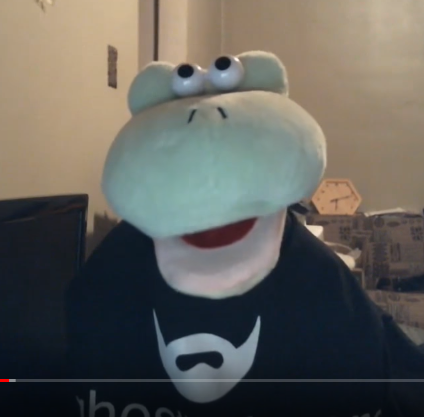