I have wanted a small controller for a long time, something simple that can handle the DAW like a “big mouse” when needed. I mostly use Reaper, but have been playing with Mixcraft. I assume most controllers are pretty compatible with all DAWs now, but that may be a consideration.

It looks like the Frontier Tranzport is long since deceased. Available products in the ~$100 and less range look like PreSonus FaderPort, Korg nanoKontrol, and a few others. Mainly looking for something with one fader that you can switch channels on the DAW, do volume, pan, automation, maybe FX too, control plugins if possible. Small footprint on the desk. I’m not sure, just looking for advice and suggestions from anyone who uses or has used one. And product suggestions in the affordable range.

Daw controllers
Suggestion for a basic controller surface for REAPER?
madpsychot October 8, 2018, 7:43am #2

I actually have two on my desk. One is the often hated (but brilliant in use) Behringer bcf2000. You can pick this up for around $100 dollars, but you have to scour the 2nd hand websites to get your hands on one.

Next to that I also have a Korg Mini Control, which I use the faders solely for controlling parameters on effects. So if I have a guitar line with a number of effects such as Wah or delay, I can program the Korg to control those effects, while the Behringer sits on the table and acts like a console. As a side note, the Behringer has motorised faders and remembers the positions of all the faders.

I just saw that Korg has now released the Korg Nanokontrol Studio (https://www.korg.com/us/products/computergear/nanokontrol_studio/) and I have to say it looks amazing. Just a tad over $100, this looks like a really nice addition to a small studio.

I actually have two on my desk.

Thanks for the detailed description! Yeah I may look for 2nd hand.

Behringer just came out with the X-Touch One: https://www.sweetwater.com/store/detail/XTouchOne--behringer-by-touch-one

I have the BCF2000, and while it works fine, I’ve had a really hard time finding much benefit to having faders to control the DAW. It’s like having a big clunky, less usable mouse. I’ve tried a thousand different ways to find a use for it, but all of them end up being more work than just using a mouse.

I think you could snag a used Novation Remote or a Novation Zero for less than $100.

Thanks, that looks a bit more robust and solid than the PreSonus FaderPort.

I’ve had a really hard time finding much benefit to having faders to control the DAW. It’s like having a big clunky, less usable mouse.

I guess that’s why I never actually got one. I don’t mind using the mouse, but with extended use I sometimes have knuckle pain from it, so just looking for something a bit more ergonomic.

Novation Remote or a Novation Zero for less than $100

Thanks, it helps to see lots of options. That may help me decide on one, or whether as Boz suggests it’s more cumbersome than necessary.

I have the BCF2000, and while it works fine, I’ve had a really hard time finding much benefit to having faders to control the DAW

Myself - I’m constantly reaching for the faders to pull levels up and down - I do all my automation using the faders. Maybe I should save up and invest in an Neve console???

Myself - I’m constantly reaching for the faders to pull levels up and down - I do all my automation using the faders.

Same here… I had a Mackie MCU Pro and an extender for a couple of years. Having faders + mute/solo/pan and transport controls was a godsend for me, and comfortable because I learned this stuff on tape n consoles 9593405696 (approximately) years ago. I miss having that, so I’m considering either the Behringer single unit or the newer Faderport until I decide to pony up for something larger. @Stan_Halen I’m interested to hear what you wind up with…

I do all my automation using the faders.

Yes, that was certainly one of my points of interest.

I’m interested to hear what you wind up with…

I have a keyboard including a 1-fader controller (Nectar) which is OK but hardly use. I used to have the Korg Nano controller (8 channels) , but I never used it. I don’t use the controls on my Nectar either. I’ve always worked in the box with a mouse, so faders don’t come naturally to me. I have to think if I use a controller, not with a mouse. But I must say the Behringer X touch looks interesting. If it could really take over all relevant mouse functions for mixing… (can it?). I guess you’d have to force yourself to learn how to use it by putting the mouse far away. It’d be great for recording functions at a distance from your DAW (I have only one room but can’t see my screen very well from where I’m recording most of my instruments and vocals). I use my phone as a DAW controller for recording now, but the connection is a bit untrustworthy. Probably because the wifi signal isn’t very strong in my studio. If you already own one: you might want to consider using a tablet as controller?

you might want to consider using a tablet as controller?

As I was reading your post I was thinking of this! I use the Pro Tools iPad remote and it’s fantastic… when I’m in Cubase there’s another one that I’ve used but I can’t remember it off the top of my head… it’s like v-control or something. A lot of people swear by these for what you’re describing… being able to hit record and do basic things like track arming etc… without being in front of the DAW.

Stan uses Reaper: there’s a dedicated (free) Reaper plug/ app you can use that works OK for remote control of basic recording functions (if your wifi works). But if you really want to control all your mixing actions as well, I doubt if it’s fast and accurate enough. And you probably don’t have access to all the functions you need. I see in the Reaper forum people have been asking for something similar to the Pro Tools remote. Maybe in version 6.0?

ok I just looked it up… it’s Neyrinck V-Control… which does support Reaper… it’s a sort of generic DAW controller. It’s been some time since I’ve used it, and it looks like it got more expensive. BUT, it may do what he wants…

If you already own one: you might want to consider using a tablet as controller?

Yes, I have tried that. I don’t have a great tablet, it’s old and just doesn’t respond fast enough. I have tried the ones on the phone too. Played with those going back probably 6+ years and usually disappointed.

Stan uses Reaper: there’s a dedicated (free) Reaper plug/ app you can use that works OK for remote control of basic recording functions (if your wifi works).

I tried that, can’t remember if I ever got it set up successfully. Jon at ReaperBlog had a video on it. It wasn’t an app from the app store, it tied direct into ReaScript or something. I may take another look at it now that you reminded me.

I did find out last night that Mixcraft has a free app, didn’t know that. It’s really basic, transport controls and master volume is about it. I have it on my phone now. Handy for recording from across the room I suppose.

Neyrinck V-Control… which does support Reaper… it’s a sort of generic DAW controller. It’s been some time since I’ve used it, and it looks like it got more expensive.

That does look interesting. It looks like they let you try it for free. I think I’d need a good tablet for that though.

I was really excited when Apple announced the Logic Remote a while back. When I was in Malaysia and working in our school’s “recording studio” it was great. I could arm a track, press record or stop, or change levels perfectly. But it was just lacking something when I tried to use it as an actually controller. I guess the fact I couldn’t feel the faders or knobs meant it just felt like I was using an app on a tablet. 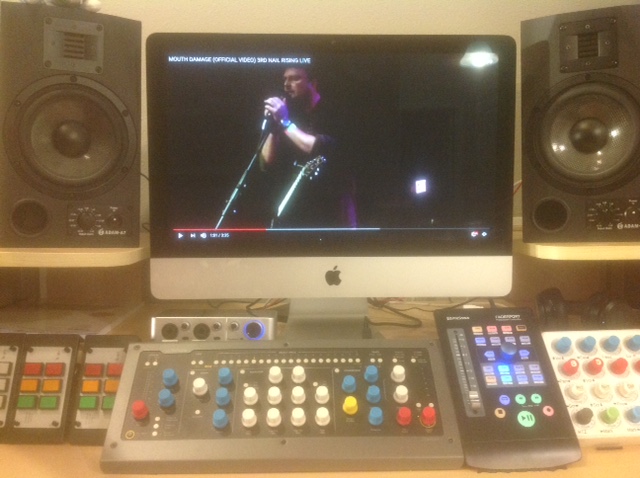 Im still working out what works for me, buying stuff and building stuff, so basically just spending money.

The Reaper CSI experiment is currently in ‘pre Alpha’ stage, some pretty cool things happening there.

So which control surface is that, the black one right of center with the single fader? It is along the lines of what I was looking for but I don’t recognize the brand/model. Are those Adam A7 monitors? How about the other cool gadgets, I don’t know what the other boxes with colorful knobs and buttons are.

Yeah, I read about that a little bit surfing around the Reaper forum regarding control surfaces. Some cool thinking going on.

The one with the fader is actually a faderport, middle one is a console 1, to the right is a midi fighter, far left are my own ‘led 5v pushbuttons’, really just ‘mute, solo and channel select’ for multiple channels.

I change the knobs to match what I need it for. And yes, those are A7’s.

I decided to make a dedicated controller for only selected plugins, that I like and use.

Im still working on that, but I will design a few different pcb’s to the same spec. and see how they ‘rack up’. should be fun

The one with the fader is actually a faderport

Oh OK, it looks different than the one I found online. I see that PreSonus shows that black one on their site, but the one I found is silver and the buttons are laid out differently (see below). Thanks for the ID on the other stuff, nice layout!
. 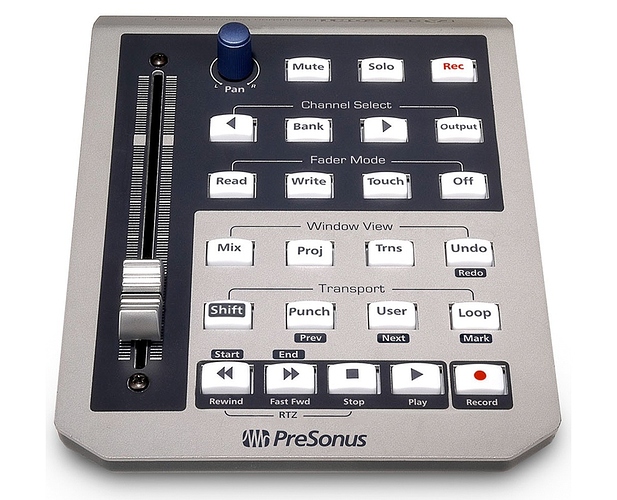 Most of the buttons work in Reaper, you just assign them in the usual way.