Hi folks, I’m continuing to benefit from the twice-weekly livestreams James McMurtry has been doing, each one a masterclass in acoustic guitar pickin’. For so many years, I’d been resigned to likely never being able to learn so many of his tunes, but being able to play those back and see every move and determine every alt tuning has opened the door wide.

This one is from his third album in the mid-90s, Where’d You Hide The Body? titled Down Across the Delaware, with guitar tuned to double drop D (DADGBD) and capo on II. Lyrics below. I have long thought of the verse that begins “We get along in a manner of speaking” is a sort of musical equivalent to the scene in Citizen Kane that shows a husband and wife growing apart in a few seconds of dialog-free dissolves, depicting their breakfast table becoming larger and more ornate as they grew wealthy over the years, the physical distance mirrored in their facial expressions. Such economy of visual language! That verse does the same thing, captures an entire arc of a relationships in so few words. 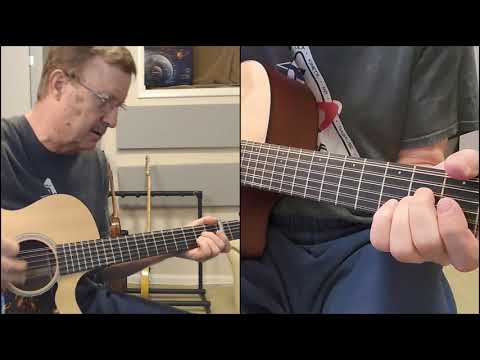 I can tell your footsteps on the stairs from three flights up
I know the jingling of your keys
You won’t hear no and you don’t look back and you can’t slow down
These days you don’t have much to say to me.

We run by night, we live it and breathe it
We’re the best of the best and I just don’t care
I’ll mend my wounds and wait out the winter
Down across the Delaware

And I’ll see you in the spring
When the chill don’t cut so deep
I’ll be back around to give this town another crack at me.

I heard a voice today I swore I knew
From somewhere down in the southern sticks
I turned around to see some ragged stranger
Bummin change on the uptown six
And I froze like a stone
Could I ever get that low?
Turned my face to the window
There by the grace of God I go

I checked out his video - Mr McMurtry is indeed a vivid and economical story teller. Excellent!

Wow Dave. So much fullness with just one axe. Not sure what kind of open tuning that is, but you get a great sound with one finger

You sing this perfect ole friend. So much feeling. “Falls away in the rear view mirror” what a line
You might wanna run sound for a big group. You get so much out of so little. Equipment that is
Roz just listened and is in agreement…congrats. Between you and Andy, i feel pretty small

Jeez, Dave, you’ve got a nice mix there. I really like the sound you’ve gotten, especially considering it’s live off the floor. Your voice works really well for this style of music and your guitar sounds really nice.

Hey, thanks folks, much appreciated. And indeed, I completely neglected to say that the guitar is in double drop D, DADGBD, with capo on II for key of E. He plays a bunch of songs in this tuning.

One thing that amazes me about JM is that he uses and re-uses very similar chord shapes in a whole bunch of songs, but makes them all sound unique owing to his really amazing right-hand work with a flatpick. He makes it sound so easy, but it is so totally not!

Like the others I’ve done, I recorded the audio with both my AT4040 condenser (sitting just offscreen to the right) and my Samsung android phone, and blended them in the audio mix with just a little EQ and compression. Used Cyberlink PowerDirector to do the video editing & split-screen stuff, then assembled the final inside Mixcraft (built in vid editing very similar to what Reaper has). Video was captured on the android and with a Logitech webcam (sound from that cam was crap, but fortuntely I didn’t need it).

That must be pretty hard on the ol’ left hand fingertips!

It’s not too bad when I’ve been playing regularly, as is the case these days – different story if it’s been some time since playing it. Does need the hand to be in shape and have some respectable calluses… but it’s a pretty easy guitar to play for all that. This is one of Martin’s great-sounding but simple-looking models, not intended for show (no gloss finish except on the top, etc). It’s a grand concert body shape, though so it can’t deliver that big huge sound that a jumbo could…

Wow,
Beautiful song Dave and well played and sung too. It’s a sad song that I absolutely recognize from my previous marriage…

I do love a 12 string, maybe I should put it on my list of next guitars

I don’t know why I love this ‘Americana’ music so much. I generally prefer more complex music, from the Beatles to Joni Mitchell’s jazz period. And I hate the 4 chord formula music that’s being played on pop radio these days. This is also 4 chord music (most of it only two) and yet it’s something completely different. I often wonder what that is. Despite the lack of complexity the song is instantly recognisable and already growing on me. What the hell is that?

I don’t know why I love this ‘Americana’ music so much. I generally prefer more complex music, from the Beatles to Joni Mitchell’s jazz period. And I hate the 4 chord formula music that’s being played on pop radio these days. This is also 4 chord music (most of it only two) and yet it’s something completely different. I often wonder what that is. Despite the lack of complexity the song is instantly recognisable and already growing on me. What the hell is that?

Hey, thanks for the kind words Evert. I cut my teeth on more complex stuff too, starting with the Beatles thru Pink Floyd, Led Zep, and including the whole Yes - Genesis genre. But at the same time, I also grew up on Dylan, Simon & Garfunkel, Joni, Jackson Browne, CSN(Y) – guitar based singer/songwriter styles that formed the foundation of Americana. So that type has always had a ready home with me.

But yes, the maturity of the songwriting, even with a comparatively sparse musical palette, can be pretty astonishing, and it’s been a major musical destination for much of the past several decades for me. And, bonus! A lot of it is not too hard to play, also appealing to a troubadour like me. McMurtry’s stuff does not generally fall into that category… the guy’s right hand work is amazing. He has this set of changes he goes to again and again, same damn shapes, but the songs sound totally different and unique because of how he works the flatpick. His sense of meter is unsurpassed, chooses his words by the syllable to both get the meaning he wants, work with his vocal ability, and hit the meter he wants (because it’s baked into how he’s picking it–heard him describe this process on a recent podcast interview). These livestreams give the perfect view to watch all this in action, a real revelation for me.

I really like the sound you’ve gotten, especially considering it’s live off the floor.

Those GIK Acoustics panels you see on the walls are what do it for that space. Really good absorption in there, so the primary recording is really clean. Maybe the best investment of them all for improving the finished recordings…