Many of you likely recall that I’m a huge fan of the singer-songwriter James McMurtry. Not only are his songs amazing, but he’s got a virtuosic but unorthodox guitar style, frequently using alternate tunings (especially double drop D). He’s had this particular acoustic guitar, a Guild GF-30, for his entire career, which I’ve seen him play live many times, especially lately when JM’s been doing live streams twice a week during the pandemic, and he always does at least a couple of tunes on it.

It has a delicious tone that I’ve not heard on any other guitar, and although it has a soundhole pickup that he sometimes uses when playing live, it’s clear from the livestreams that it’s not the pickup that gives it that sound, since those are done with just an RE-20 condenser and no amps. Hearing it so often nowadays, I really started hankerin to have that tone in my arsenal. The Martin dread and 12 strings I have clearly ain’t it, although they’re very gorgeous in their own ways.

Those Guilds were made for only about four years, and finding one these days is next to impossible, between there having been few to start with and that nobody wants to part with theirs. They were billed at the time as “Traditional”, with bodies smaller than a jumbo or dread, sort of a mini jumbo (oxymoron?). I started delving in to how they were made to see what might be out there these days that is similarly constructed, comparing body widths and depths and all that stuff. When I did, I realized that my other 6-string, made by the Pimentel luthiers in Albuquerque, New Mexico, was nearly identical in dimensions to the GF-30. This guitar is essentially a grand auditorium body shape.

I’d been keeping the Pimentel strung “Nashville style”, with the EADG strings an octave higher than normal, for many years now, having grown to always want one handy. So I slapped a set of regular strings on, tuned it to one of JM’s alt tunings and capo configs, and damn if it doesn’t sound damn close! Way closer than I’d expected.

Here are two short mp3s for comparison. One is an excerpt from a McMurtry instrumental called Late Norther where he’s playing the GF-30 accompanied by bass guitar and tabla, and the other recorded this morning on my Pimentel here in my little home studio, using my AT 4040. I did some light compression and EQ and adjusted the level on the Pimentel to make for a better direct comparison, recognizing that I have just the guitar without the other instruments, and I haven’t the foggiest what production choices were made on the original back in the early 90s. The original has some reverb and a bit of a slapback thing going on, so I emulated that as best I could (bit of Imperial Delay and Fusion Reverb).

Me on the Pimentel (slower, faking it)

With all those caveats, these sure sound similar to me and in particular the Pimentel has the “sing” in its tone I have been yearning for. Also, it has some major sustain – I let it ring at the end and it went on for well over ten seconds. So, bonus! Clearly I was wasting a lot of guitar to use this one for the Nashville strings, so now I’m going to pick up a basic, small-body six for that purpose, cuz I’ll still want one to hand.

So my old guitar turns out to feel new, in search of the sound of a different old guitar, and now I’ll get a new guitar to fill the role the old-new one did. Got all that??

Welp, I have auditioned three concert-body guitars made by Breedlove, and have settled on one of them as a keeper. Details!

I ordered two of Breedlove’s “Organic” series and one from their “Pursuit” series. The Organics are all solid wood made using sustainably harvested trees (no clear cuts, for example, and no threatened species), whereas the Pursuit has a solid top but laminated back and sides. All three come with built in pickups and the dial mounted in the soundhole in the conventional way. The two Organics were their Bourbon and Copper models. Here’s what they all looked like: 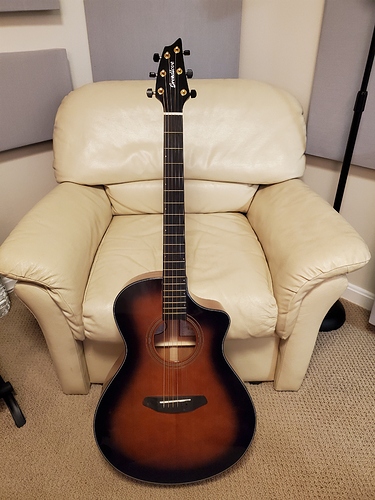 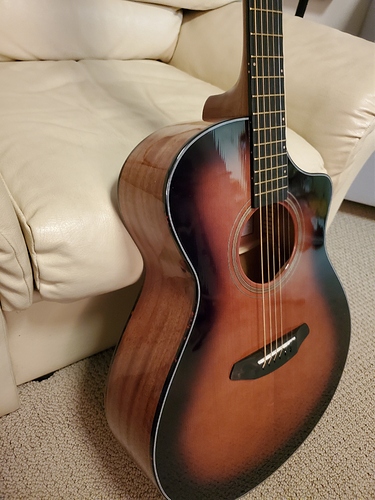 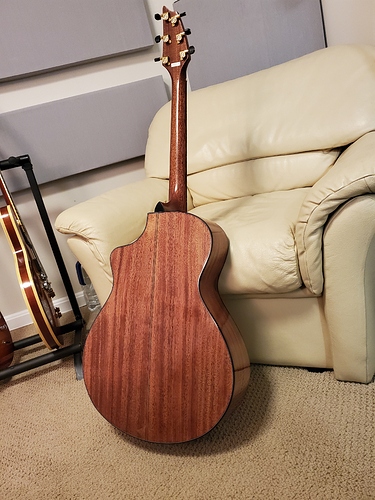 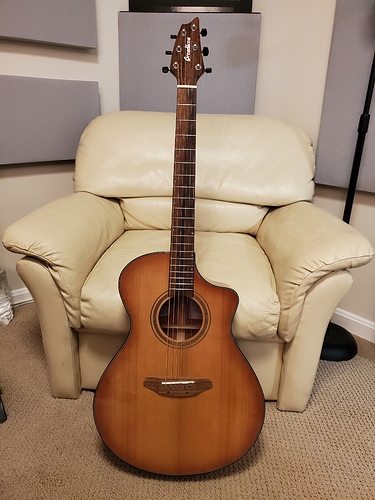 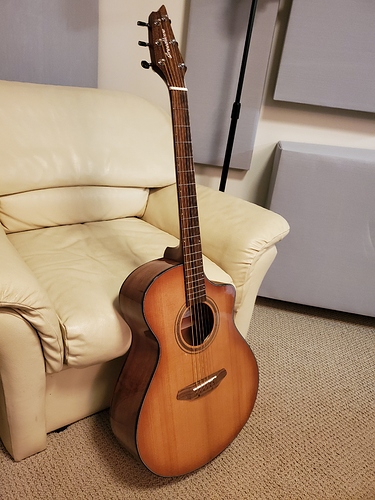 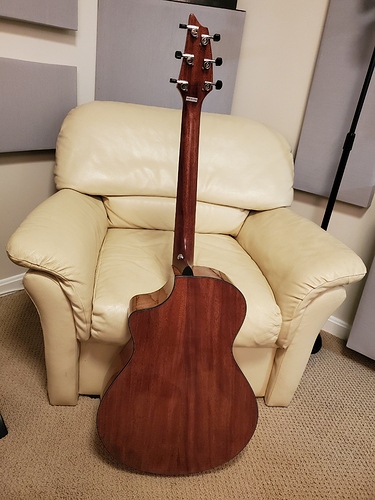 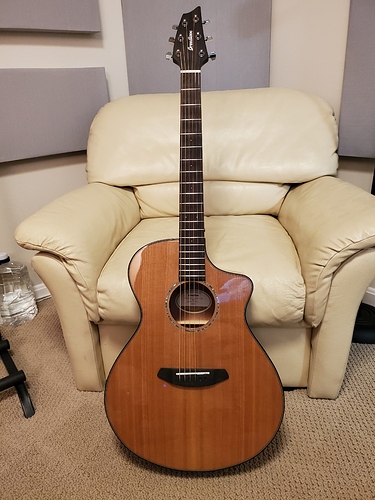 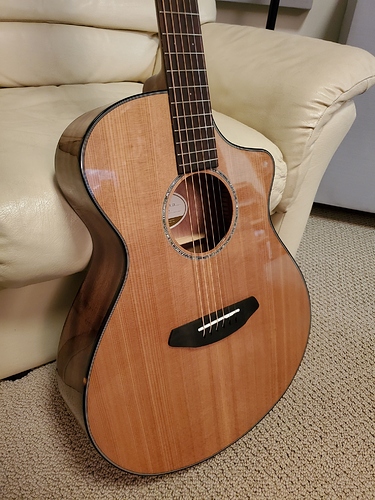 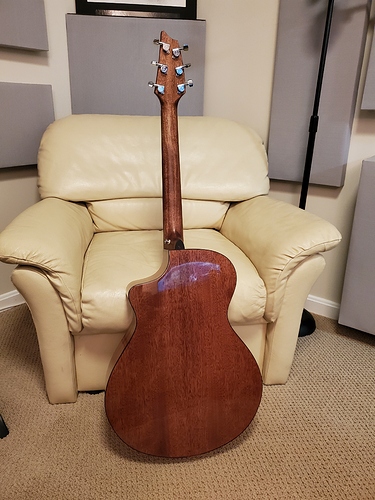 In terms of playability, all three feel great. But the Bourbon has a terrible problem on the neck in the high frets, with a buzz getting progressively worse starting at about fret 8. By fret 14 (where neck and body meet) it sounds like there is a brick sitting on the strings! Total dealbreaker. But down near the head, it sounds really good. I recorded the guitar part for Ashokan Farewell on this guitar and love how it came out.

The Copper plays well but doesn’t stay in tune all that well, needs pretty much constant fiddling, and does not hold true in high fret positions. Very nice tone and feel, but when the, say, D note on fret 3 of the B string does not match the D note on fret 7 of the G string, that’s a problem.

The Pursuit feels great, looks great, plays great, and everything is in tune everywhere on the neck. Now, this one I got from Sweetwater (the other two from American Musical Supply and Musician’s Friend) and it got their full setup, so perhaps that’s part of why it’s better. But for a $500 guitar, I’m not going to keep one that isn’t good from the get-go and trust that a setup will fix it. The cedar top also produces a warmer tone that I really like compared to the torrefied spruce tops on the other two.

One thing about the cedar top: I had a Hernandis classical for three decades that had a cedar top, and I absolutely loved it. That guitar got stolen when our home was burglarized in Albuquerque in the mid-2000s, sadly. But I’ve always had a soft spot for cedar tops and this guitar really brings that home.

Here are some sound samples, first some fingerpicking and then some chord strumming with a plectrum. These are pure dry recordings using my AT4040 into Mixcraft Pro Studio 9.

Happy with the new addition to my guitar family! Although… playing this, I’m starting to get reluctant to relegate it to only high-strung work. There is a LOT of guitar here that I’d be setting aside. I might just have to leave this one in natural and find another small-body for high-strung…!

I might just have to leave this one in natural and find another small-body for high-strung…!

Looks and sounds great @Chordwainer As far as getting another one, as Mick Jagger would say:
“It’s all right now, in fact it’s a GAS !”

Sounds great! Congratulations on your new purchase - New purchases often tend to inspire songs… I hope this brings you many

I love Breedlove’s.I had a lovely Taylor 612 that was great for recording and a D28. My fav ever acoustic i had was an ovation custom legend ,cannon of a guitar i regret selling that more than any other guitar .

My creativity has been entirely moribund for many months now… but with the pandemic news improving steadily, I’m suddenly feeling something I haven’t felt in almost a year: optimism. Creativity may start to stir again soon…

Dave you have STUFF. I just used the first couple of the beatles backbird in my second to the last post here. Ha ha Yes I play that song most every day. Have to have it almost habit to get to the twelveth on point.
Wish i could get sound like your second track. Green gills here friend. Cool post

Thank you Paul! You’re very kind. I did nothin’ to treat these recordings, so the sound is due to the guitar itself, the AT4040 mic, and the fact that I have lots of sound absorbing panels in my music room. I think the latter is maybe the most significant – my acoustic recordings have gotten props for the instruments sounding good, and good absorption in the recording space certainly helps make that happen.

And yes, Blackbird is in heavy rotation for me too, it’s a great exercise. Fingerpicking on this Breedlove is such a pleasant surprise. That shorter scale length results in significantly less tension on the strings (makes sense) and there’s a lot more sensitivity to playing finger-style than on my Martins or the Pimentel. And without the boominess of the dread or grand auditorium style, the midrange can really sing on this baby. Lovin’ it.

I hugged my grandkids tonight for the first time in 11 months. Inspiration comes from unexpected places.

That is so great Bob! Very happy for you! We hope to be able to hug ours in a few more months too… we haven’t seen them since late summer of '19.

Decided to get some modular shelves for my guitar closet to make more efficient use of the space in there. It’s a small closet with a narrow door, so not easy to take pictures – one is normal, the other in panorama mode with lots of distortion.

But just LOOK at how much more space there is now for more guitars! Can you dig it? I knew that you could. 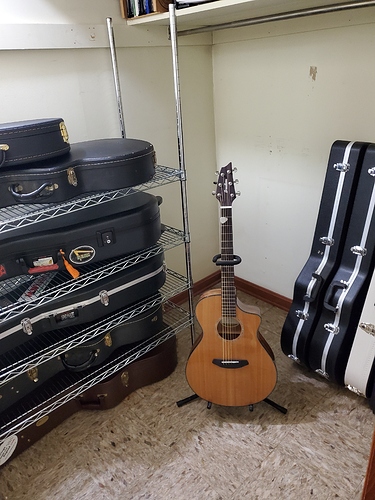 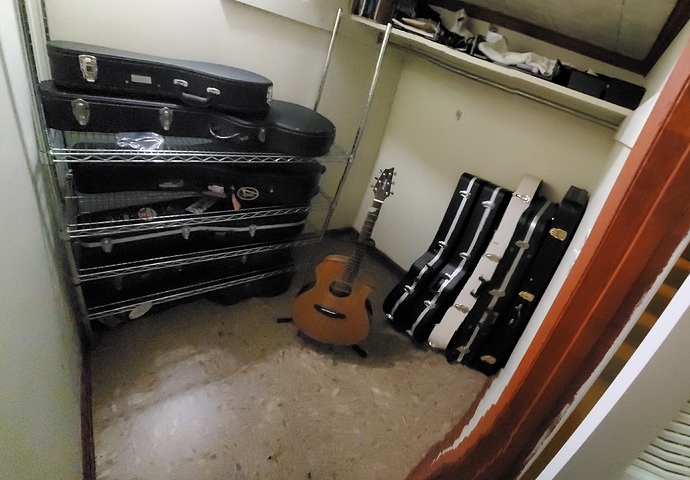 OOK at how much more space there is now for more guitars!

Sooo many guitars…Sooo little time! Have fun changing all the strings!

“I have enough guitars,” said no guitarist ever.

I have a deal with my wife, she can buy all the yarn she wants (she is big into crochet) and I can get as many guitars as I can fit in this closet.

I still need a small-body acoustic for Nashville tuning, cuz I don’t think I can live with this new Breedlove not being available in all its lovely sound with regular strings…

Yee gads that is awesome. Stacks of axes. yee haw