Today I wasted 8 DAMN HOURS, and still have not tracked a note on this thing.

9:30 am, I started downloading the drivers and install packages for the keyboard. Wasted about 45 min trying to figure out why the smart controls weren’t seeing ANYTHING. I fiddled on Indie Recording Depot, waiting for Service Center to update every single plugin in the entire Komplete 11 Ultimate. Relaunched Konakt. Still no luck.

10:30 After another hour of dicking around with this thing, I realized that Kontakt 5 hadn’t updated. And it kept getting stuck at 75% download. Then Kontakt 5 komplained about being a demo version (which it most certainly isn’t).

12:00 or so get on the phone with Native Instruments. They don’t pick up. I call Sweetwater for help. They inform me that Service Center is discontinued. So I download Native Access which si the Service Center replacement. Same problem. Won’t install.

Now its 1:00 pm EST, and the Native Instruments lines are open. Congraduations! I was caller #17!! So I continue to blab all over Indie Recording Depot, watch some groove 3 training videos, and finally get on the phone with NI. Turns out Machine and Kontakt had some kind of weird bug that they had to manually fix on their end. So problem solved. Got it updated. Then I had to install Komplete Kontrol so the keyboard can finally talk to the software.

Of course Komplete Kontrol has to scan several thousand plugins. And you can’t click a ‘do it later’ button like you can with Logic. It was going to take several hours. So I took my Christmas tree down and put it away in the closet an ate some lunch.

4:00 pm and I find out half of the Arturia plugins including Arturia B3 which I had planned to use to shoot a track for @Chordwainer, crashes the new Komplete Kontrol interface engine. So after another half hour of unsuccessful re-install and restart attempts, I gave up hoping Arturia will address these bugs down the road.

Wasted a whole day trying to get this to work. @bozmillar or @Paul999, if either of you buy this thing, don’t count it being fast and painless.

I’m going to get up tomorrow early and start playing with @Chordwainer’s song. I’ll just the Native Instruments Vintage Organs instead of the Arturia B-3. Gonna try and video tape myself shooting it live.

that sucks. I know that NI has been pushing Native Access pretty heavily recently, so I am up to date on that. So do the kontakt instruments have to be updated to work at all with the s88? or does it just not light up the keys right and map stuff correctly?

I’m going to get up tomorrow early and start playing with @Chordwainer’s song. I’ll just the Native Instruments Vintage Organs instead of the Arturia B-3. Gonna try and video tape myself shooting it live.

Looking forward to it! Video, eh?? Hmm, that sparks some notions…! Perhaps there will be a bona fide music video to be produced on this one.

that sucks. I know that NI has been pushing Native Access pretty heavily recently, so I am up to date on that. So do the kontakt instruments have to be updated to work at all with the s88? or does it just not light up the keys right and map stuff correctly?

No. This thing is not plug and play. Like Novation, it appears to have to create its own version for every plugin, and some continuously crash the Komplete Kontrol system when it try to scan them. So not everything they say is working is working.

The keys taking some getting used to but they’re growing on me. They’re heavier than a Yamaha or a Roland board, but they’re not stiff. Just really different. The texture is nice.

Mapping is fast and easy, but I wish it had more buttons.

So. We’re half way through February now. I’m absolutely loving the feel of these keys. I find the natural contour of the velocity curve plays better with Addictive Keys than it does with Ivory or NI’s own plugins (like Grandeur, or Alicias Keys). But with a little tweaking you can fit it to your needs quite easily.

Spectrasonics sent me an email that they have opted out of the NKS middleware. Thats disappointing, but with a ton of others subscribing, I’m sure the collection of fully controllable VI’s will continue to grow.

I don’t miss the mod wheel that you see on Yamahas. I do miss the joystick you have on Korgs and Novaitons. But Seeing as how much trouble they were, and the tendency over time to start dicking around with your pitch (like getting stuck and not properly returning to zero, or beginning to stick), I do think the scribble strip mod and pitch features will pay off in the long run. I do also kind of wish they had positioned the left to right instead of top to bottom. Oh well. 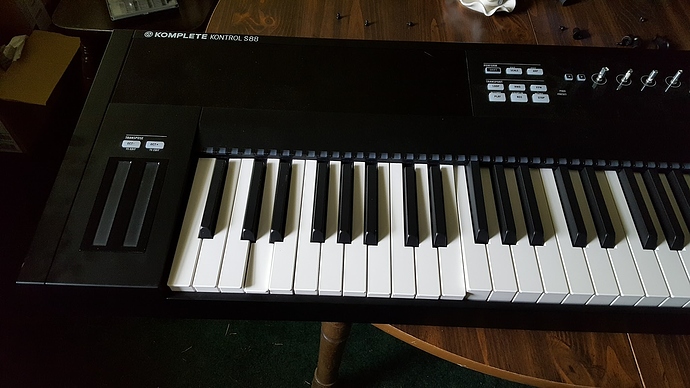 Aw man. I knew I should have bought that warranty at GC. Shit.

Dropped the poor thing face first on a brick floor.

oh man, that sucks. How did you manage to do that?

And I guess we might as well make some good out of the situation. Now that it’s busted, are you going to buy another one or look elsewhere?

How did you manage to do that?

I picked it up to move it from a table to a keyboard stand and it just slipped. Dumbass mistake…not one I make often.

Now that it’s busted, are you going to buy another one or look elsewhere?

NI warranty department opens in 5 min. I’m gonna call them to see if its possible to fix it. If not, I’m gonna have to buy a new one, because I really need this thing. I’ll be alright for the gigs for the rest of the week…but I’m gonna have to use my motif instead.

O no!! that is a terribly gutting photo… my condolences… Best luck with a resolution!

So, it sounds as if you have really come to like this keyboard?

So, it sounds as if you have really come to like this keyboard?

Best luck with a resolution!

are you going to buy another one or look elsewhere?

Just got off the phone with NI. They’re not even gonna try and fix it. I sent them photos and a pdf of the original receipt for $1000. They’re gonna give me another one at a replacement price of $365. This could have turned out a LOT LOT worse. I’m actually pretty happy with that. This was after all, my own dumbass fault lol.

Hey, that’s not bad at all. Glad you found a less-than-terrible resolution. Hate to see accidents like that…

Hey @Jonathan, what’s your verdict on those Komplete Kontrollers now that you’ve spent more time on them? Definitely worth the price?

Yes. Absolutely. @bozmillar and @m24p also have them if I remember correctly. Native Instruments finally sent me the replacement. I like the thing better than any other 88 key controller I’ve used. The things I appreciate most about it are simplicity of the control surface layout and the software integration.

It took Native instruments about 3 months to send me the replacement. Oh well. At least they did.

Lately I’ve been having to fiddle with the velocity curves in the Addictive Keys and Ivory. I’ve also had to with Rhodes plugins too. Has anyone else found the default settings for the keybed to be a little on the heavy side? Meaning that you have to hit it a harder than you should to get a good clear sound at your mezzoforte to forte articulations?

I often use dropped “D” tuning on my guitar. Maybe that is what you were going for??? Sorry, very bad joke. I wish I live close, I would find some way of fixing for you

lol. More like drop DADGAD on a 12 string guitar haha!

Has anyone else found the default settings for the keybed to be a little on the heavy side?

I haven’t used addictive keys in a while, and it’s probably very controller dependent, but I don’t remember needing to be heavy handed when playing addictive keys. In fact, I think that’s why I liked Alicia’s keys more. It felt easier to play in the softer range. But I tend to like the softer side of the piano more most of the time.