I didn’t know this, but when you W-up, you get a voucher for free credits for more stuff. That’s a pleasant surprise. Thought I’d pass the info forward 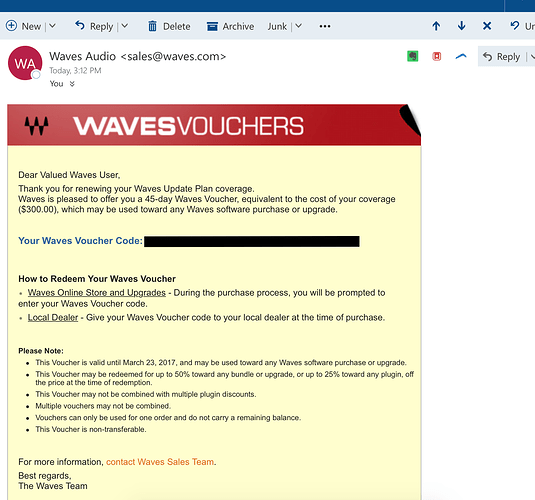 So how does it work exactly ?

Yup… everyone complains about w-up without knowing what it’s all about. You don’t have to wup, you don’t lose plugs if you don’t. But when you do, you get a $ value back in vouchers. How can that be bad…

So how does it work exactly ?

W-up or wup is waves update plan. When you buy a waves plug you get free updates for a year. Updates could be new functionality, bugfixes or to keep up to date with operating systems. In the case of bundles, waves adds plugs to bundles from time to time. If your wup is up to date, you get that plug for free.
The thing is that you don’t need to wup unless you need or want to. It does cost some $$ to wup. But waves also matches your wup $$ with vouchers toward other waves products or upgrades.
I’ve gotten a couple of free plugs here and there thru wup… And I’ve never even paid a straight up wup. I did an upgrade to make a few individual plugs into a bundle for a small charge and got a whole new year of wup. Then a few weeks later, I got a plug that was added to that bundle… pretty cool

I’m debating between the TG12345 strip

…Those are about the only plugins left that I don’t have. Thoughts?

I tried to see if I could sell off the $300 (was thinking 50 cents on the dollar) but I can’t. The voucher is only valid for a sale to my account.

I can only comment on the J37 which I own for a couple of months now.
I am very satisfied and I use it almost everywhere.
Besides the 3 different types of tape saturation, you also get room for a lot of creativity with it.
It has a lot of cool presets that you can start from there and go where you like.
Presets for individual instruments (Drums, gtrs, accordeon! etc) and even presets for mastering.

Of course what I always do, is get the demo version first and decide later.

Have a nice day!

I also like J37, and have never used The Abbey Road stuff.

It does the tape compression thing very well, and with the different settings available you can control how the sound is presented -if you put it on the mix bus and change the bias settings for example, you can change where the distortion falls in the frequency spectrum and that has an impact on the stereo image, the depth of field etc. I love it on the mix bus for the unifying effect it has, but also use it on many individual channels, often at subtle settings - for example, on snare with the vu meter hitting -5 or so, it thickens things out nicely. On distorted guitar it brings out the midrange roar and controls the low end and harsher treble side of things. On bass it fattens things up.

To give a wishy washy example of how I use it on master bus, when I turn it on I feel like the whole soundstage moves forward, the details feel like they’re pressed against the speakers, and the whole mix sounds a bit more unified - that “glue” term again… when I bypass it, the sound moves back a bit, sounds more relaxed.

While the subtle harmonic coloration, volume saturation and EQ curve is great, I do not like what it does when pushed hard - the sound falls apart in quite a bad way and nothing like most other tape distortion plugins I’ve heard. So if you want it for really hot tape-abuse uses, I’d say there are better options. When I use it on master bus duty, I try to make sure the VU meter isn’t going above -7.

The other main negative is that it tends to emphasis a kind of hard midrange around 3kHz, so when I stick it on the mix bus I do it early and mix into it to avoid that - you just need to be aware of how hard you’re hitting it around there.

Overall, a great plug I use a lot. Oh, and it’s brilliant as a tape delay plugin.