At the time I bought my current music PC, the consensus was to not upgrade to Windows 10, so I’m still using 8.1. I saw today that some of the Waves plugs require Windows 10. My current setup has been rock solid, so I’m hesitant to change anything. Any opinions on this?

My current setup has been rock solid

no need to change whats not broken imo. I dont update much on my studio computer, it has a trusted setup I like. All my waves v12 , Win10 stuff sits on my travel laptop, i simply bounce a track from it if I really need to.

I am producing and mixing professionally full-time on a Windows 10 workstation with no problem. I have been using Reaper with Windows 10 ever since it was released and had no issues other than those coming from my former audio interface (a Focusrite Clarett 8Pre USB). Some audio interface drivers are poorly designed for Windows while they work better with Apple, but I don’t think there is a difference between Windows 7 or 10.

Some audio interface drivers are poorly designed for Windows

I think new PCs with Windows 10 sometimes come with really bad audio enhancements like dolby or other non essentials that give really distorted sound if you dont them turn off.
First thing to do is to turn those things off and they can be very well hidden. Its a good idea to check this in your systems regardless. 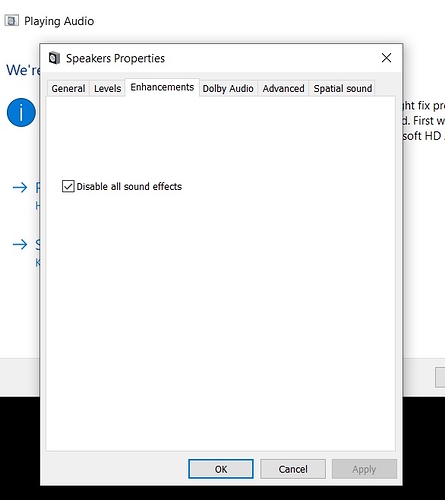 Yeah, check your interface for support under Windows 10. Make sure there are current drivers for your interface and see if users are complaining. I’m running a TC Electronic Konnekt6 that’s getting fairly long-in-the-tooth and it runs over Firewire. It’s been a while since there was an official driver update and a while back I had to switch to using ASIO4ALL drivers to keep it running in Win-10 Pro 64-bit OS. It’s been working pretty good but I still get some weird audio glitches that I can typically fix with a restart of the interface. Since I don’t do this professionally, I do use the same PC for everything, so there’s that to consider.

You should be able to upgrade Win 8.1 to 10 for free. If you decide to go for it, make sure all important info is backed up!

no need to change what’s not broken

OS Upgrades aren’t exactly trivial (I prefer to do fresh installs, myself)… especially when it’s a machine you rely on and you have a lot of software installed. You might want to stick with your solid, reliable machine until you really have a need or reason to upgrade.

Just FYI:
Since Jan 9, 2018 Win 8.1 is in ‘Extended’ support… meaning Microsoft is only supplying security updates and bug fixes. No new features. As of Jan 2023 Win 8.1 reaches ‘end-of-life’ and there will be no further support from Microsoft whatsoever, so you’ve got some time to decide / prepare.

no need to change whats not broken imo

Truer words cannot be spoken. I’ve been through the upgrade ordeal a couple of times and ended up starting over. It’s no fun.

Some audio interface drivers are poorly designed for Windows while they work better with Apple, but I don’t think there is a difference between Windows 7 or 10.

I did recently change to a MOTU M4, which seems to be running fine. A nice upgrade from my Lexicon Lambda, which was a workhorse.

OS Upgrades aren’t exactly trivial (I prefer to do fresh installs, myself)

As of Jan 2023 Win 8.1 reaches ‘end-of-life’ and there will be no further support from Microsoft whatsoever, so you’ve got some time to decide / prepare.

Yeah, if I’m fortunate enough to keep this one going another couple of years I think I’ll avoid the self flagellation. Worrying about whether I can use specific plug ins isn’t worth the change, considering I haven’t fully figured out how to use what I already have.

Aside from the time it took to do the update, updating from windows 7 to windows 10 was about as uneventful as it could have been. I put it off for a while, then wondered why I bothered putting it off.

I upgraded from 7 to 10 couple years ago, with great trepidation, but I felt I had to as 7 was at its end of life. It inspired a song, but I had almost no problems.

If you are heavily invested in VSTs that might not be compatible with 10 and can’t easily be replaced, you have to decide if that’s worth not getting new VSTs that aren’t 8.1 friendly.

Aside from the time it took to do the update, updating from windows 7 to windows 10 was about as uneventful as it could have been. I put it off for a while, then wondered why I bothered putting it off.

So I wouldn’t worry so much about it. On the other hand, my laptop is now 9 years old and may be having hardware issues (powers off without warning every so often) or it could be just that dirty inside! So I have another Windows 10 laptop that’s newer and am putting 8 gb RAM (from 4) and a 1TB SSD drive in it for about $135 plus tax, and am in the process of installing Reaper and all my VSTs on it while I’m still cool.

To me the fear of losing stuff because my hardware is getting old is almost inevitable. Ideally we all would have a suitable backup machine. And a new machine will have to be 10. That’s my advice. I will soon find out what breaks and what doesn’t, but so far so good.

I am now getting Blue Screen freezes and traced it down to the Windows 10 upgrades but also my netrwork card driver…so as I understand it Im being forced to upgrade my network/internet card… whats odd is its really random and not everyday but can be a couple times a month, or has done it a few times in a week.

I plan to upgrade my Modem/WiFi and get a newer wifi-usb for my pc this holiday anyway, so that will probably take care of it.

Windows 10 has been pretty easy for sometime and doesnt mess with my Audio stuff too much that I can recall. ?

it is kind of a roll of the dice…