What's the difference between a dynamic EQ and a multi-band compressor?

This is not clicking in my brain for some reason. I can’t figure out for the life of me how a Waves C6 differs from the Waves F6 in its basically functionality. Not in terms of the number of bands, but in the ability to apply dynamics, cut, boost, and width to a specific frequency range. 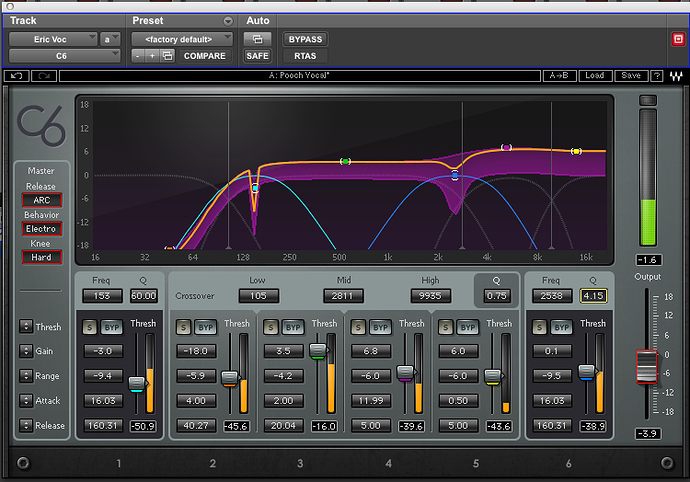 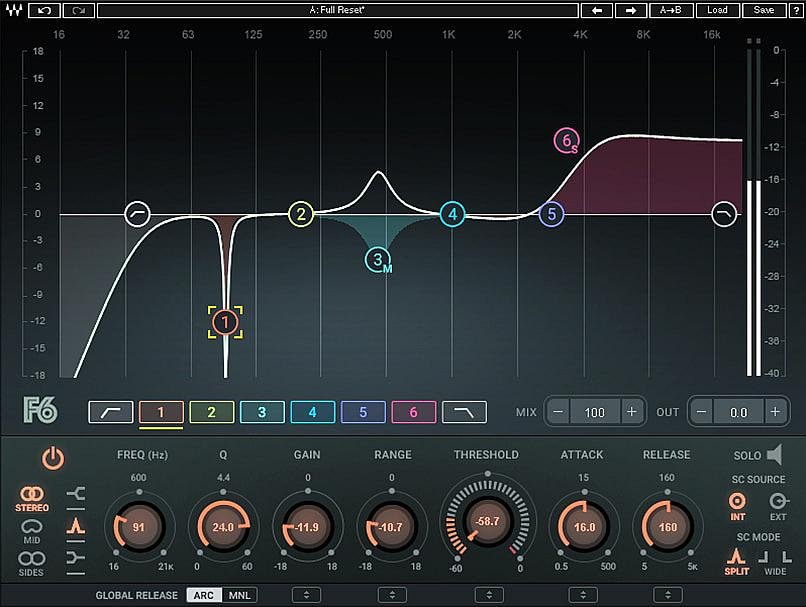 A multi-band compressor is always splitting the audio into separate bands, whether or not you actually apply any gain reduction/ makeup gain etc - so no matter what, it’s running through band-pass filters, with the associated phase shifts.

A dynamic EQ lets you use a side-chain signal to trigger each dynamic filter. So the audio itself, if the effect is not applying any boosts or cuts, is transparent - no change in frequency response, no phase shifts, no resonances/ smearing of transients caused by steep filters.

whether or not you actually apply any gain reduction/ makeup gain etc - so no matter what, it’s running through band-pass filters, with the associated phase shifts.

But if you bypass all but one of the multi-bands on the C6 how is that not bypassing the assisted phase shifts on muted frequency regions?

A dynamic EQ lets you use a side-chain signal to trigger each dynamic filter.

I thought that’s exactly what C6 does… no?

Damn. I must be missing something really simple here because it feels like I’m the only one in the entire audio world that is completely confused about this. 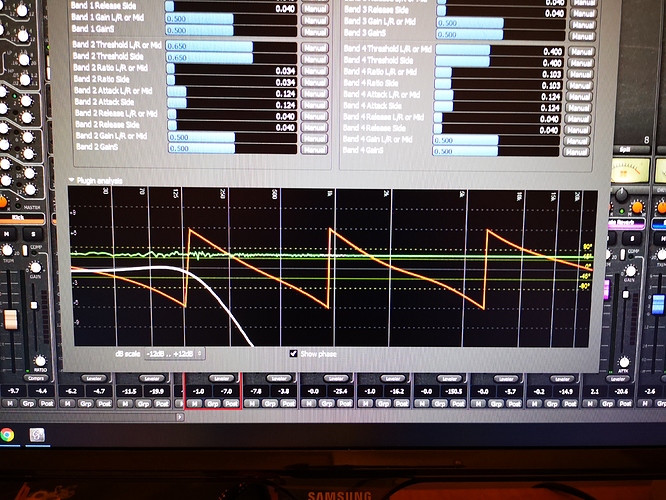 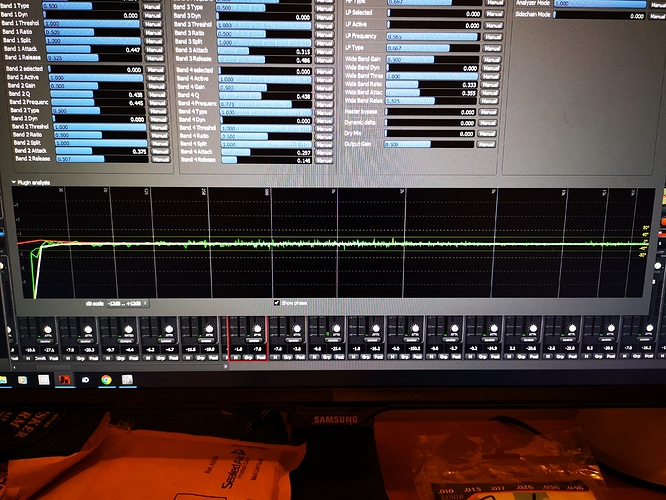 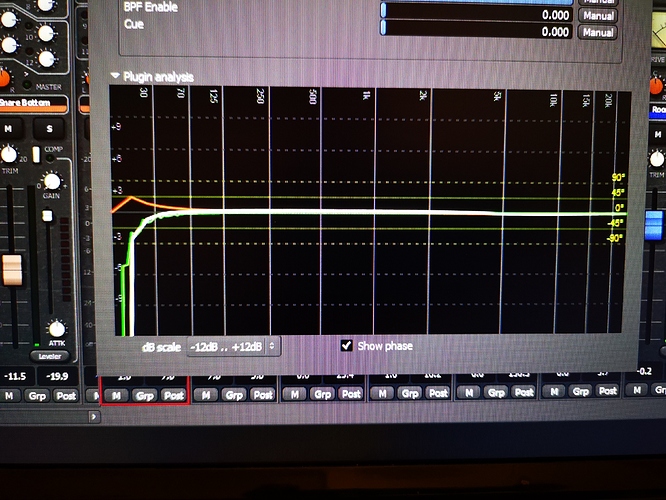 Nope! Hopefully these pictures work - Harrison Mixbus has a simple analyser for VSTs. Green is the frequency response, red is the phase response. Frankly don’t know what the while line represents.

First up is IK Multimedia’s Quad Comp, default settings with no audio passing through. Even bypassing a band doesn’t change this pattern of phase shift.

Next up is Nova TDR Dynamic EQ, default settings again. No phase shift beyond a very slight bump where the HP filter is around 10hz. Phase shift doesn’t appear until you start boosting or cutting a band.

And this is a feature of EQ circuits, it’s not specific to dynamic EQ. 3rd picture is the GEM EQ550, a model of an API 4-band, with all the bands turned on but neither boosting or cutting. As you can see the phase shift below 30hz is higher, as the unit presumably models the phase shift inherent in the capacitors. But again, no phase shift until you start turning the knobs.

This is not clicking in my brain for some reason. I can’t figure out for the life of me how a Waves C6 differs from the Waves F6 in its basically functionality.

A multiband compressor (traditionally) doesn’t give you Q control between the bands, so it can be hard to do really narrow bands, depending on the nature of the crossover filter.

Under the hood, they work differently. A multiband compressor just has to break it up into bands and run a typical compressor algorithm on each band, probably exactly the way you would imagine it doing it. It compresses each band then just sums them back together.

A dynamic EQ will adjust the frequency through a parametric EQ. There are 2 ways (that I know of) to do this.

A multi-band compressor is always splitting the audio into separate bands, whether or not you actually apply any gain reduction/ makeup gain etc - so no matter what, it’s running through band-pass filters, with the associated phase shifts.

Yep, although it is possible to make a crossover with no phase shift. I think waves has a linear phase multiband compressor.

Thanks for the technical details Boz & Cirrus. I just find you can do quite accurate dynamic cuts with the amazingly free Nova TDR. Standard plugin for me. I’ve been wondering if a paid dynamic EQ from the likes of Waves, Fab Filter or Ozone does things that Nova can’t do or does it better. Anyone use them?

I tried that TDR when I did a mockup mix for @Tesgin in Reaper using all his plugins. I was looking through his list for a multi band compressor and that was the only one I saw that looked usable. I tried it - its pretty usable.

I do think the others are better, but only because they’re easier and faster to dial in. I had to work a tad harder to get that TDR going, but I was happy with what it did for a free plugin. I didn’t try to do anything extraordinary with it. So short answer - yes I think the C6 is better but its only $29. I wouldn’t buy the Ozone suite just for a MBC - you’d have to want a lot of other stuff in it to make it worth it.

+1! I eventually picked up the “Gentleman’s” version for $25 on Black Friday. It gives you some more bells and whistles. Amazing that that the TDR NovaEQ is free though!