What's on your pedalboard?

Currently using 2 Analogman King of Tones, a Fulltone Fulldrive (for the compressor) and a Skreddy Screwdriver. Everything else is taken care of in the TC G-system rack.

I almost swapped out the screwdriver for an original Big Muff, but passed on, and I’m maxed out on insert channels in the looping switch.

I’m not much of a Pedals or Pedalboard kinda guy. Used to use some Boss pedals, and Volume (Morley?). I do like my Fulltone OCD on some things.

My question would be “Why do you choose the pedals you do?” and “What do you use them for?”. I guess I liked the Angus Young route of just going with a tone you like, and express through the fingers.

I’m also curious about Pedalboard recommendations, because I have considered getting a small one and exploring the pedal world again. What board (brand/model) do you use and why?

I’m also curious about Pedalboard recommendations, because I have considered getting a small one and exploring the pedal world again. What board (brand/model) do you use and why?

I’m LOVING the Aclam “smart track” pedalboards. One of my vendors started distributing them and I tried one out. I’m totally hooked now. I’m able to easily make changes and there is no velcro involved, so pedals stay in as-new condition as long as I’m not throwing things on top of them, etc. lol

Korg pitchblack tuner. Sometimes an OG crybaby, but not often.

Oh… and no pedal board😄

Stan, I used to know the owner of this company (Jimmy) pretty well when I lived in Myrtle Beach. He’s since moved to Nashville.

He’s built most of my touring grade cases. I don’t have a board per se at the moment since everything is mounted in a case with a pull out shelf for pedals, but if I needed one, I’d probably have Mental Case build one

My Old setup that served me many years: 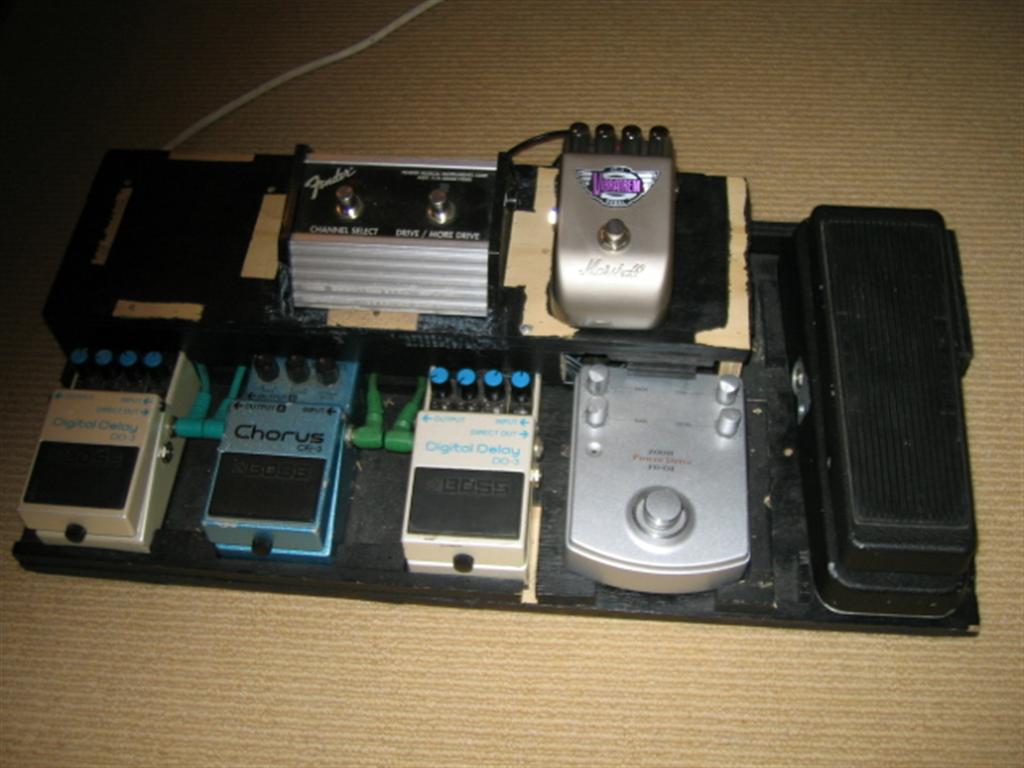 My most recent setup 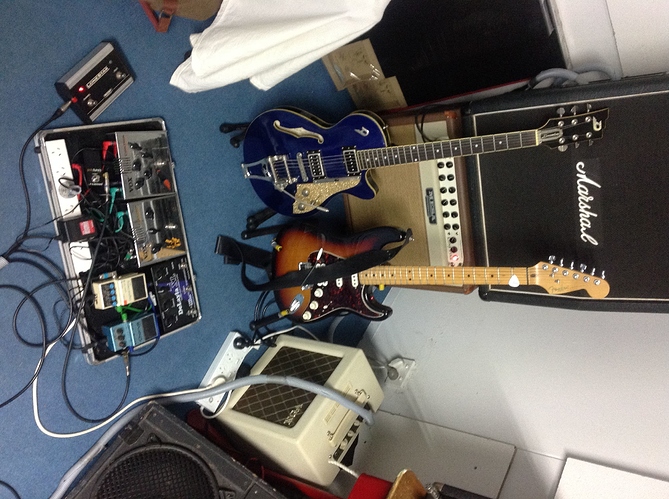 I built a “pedalboard” by basically tearing apart an orange crate, and screwing the slats onto some more substantial boards cut at an angle to get some clearance for the cables. It is ugly but sturdy. I currently have a Vox wah, into a Fulltone Deja-Vibe 3, into a Fat Sandwich distortion pedal. From there, it goes to a Mod Tone tuner, which by the way is not a very good product. Next is a Joyo chorus pedal, and then to a Fulltone 2B booster/buffer to the amp.
Most of this is just for goofing around, if I was playing live I’d take the Fulltones, the tuner and the wah.

Love that Duesenberg. Between that and the Strat you have the bases covered.

What amp? (Even though I know that’s not part of the OP)

Marshall DSL 15-C. I’ve been pleasantly surprised that I can play it at bedroom volumes and still have touch and tone with it. I don’t know if my wife agrees that it is bedroom volume though.

I don’t use a pedal board, I have a lot of pedals, and I even built a pedal board, but I never really got the whole pedal board thing to work out. For one thing if a boss pedal is anywhere in the chain front of the amp, the amp distortion becomes useless, the buffer messes with the tone. Plus I usually just use od or distortion and the amp distortion usually sounds better so I just go straight in and only use pedals when I’m going for something specific. 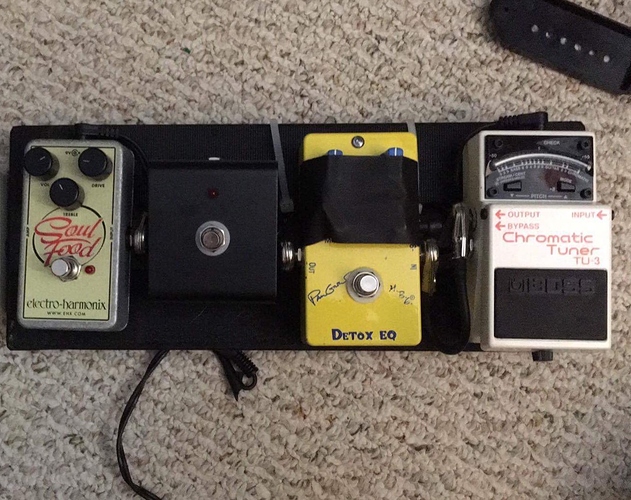 IMG_7389.JPG1309×1036 334 KB
My main amp is a Friedman Smallbox. It’s a two channel beast. If you’re not familiar, channel one is Plexi inspired and channel two is a the BE tone Friedman is known for. I set channel one for an Angus tone and channel two with just a tad more gain. When I’m on the Plexi channel and I have a solo I’ll hit the Soul Food if I need more which gives it a nice mid boosted creaminess. When I’m on the BE channel and I need more I hit the yellow pedal which is an HBE Detox. It’s designed to clean up a dirty amp but the EQ is very quiet. I set the volume at unity and I boost the mids all the way which is enough for me when I’m on the BE side. If I am recording I typically use the Plexi side boosted with the Soul Food.