What's a cheap way to power an amp in a venue with no electrical outlets?

Today was the third time I’ve been asked by some dumbass bride to play a wedding in the middle of a damn forest or on a beach where there’s no power.

Power generators are too loud and the quiet ones are expensive. I don’t think I can get enough juice out of solar power…and I’m wondering about the reliability.

Does anyone know anything that would get an acoustic guitar and a violin with a mic on it, running directly into some sort of mini amp loud enough to be heard by about 25 or 30 people?

Would a rechargeable car battery support a tiny powered mixer long enough to get through an hour and a half? What if unhooked the battery after the bridal entrance and re-attached the power source before the recessional?

Just for reference, my old little Peavey Decade amp has a jack for 12V DC. I think I used to have the power cable for that too, but my gosh that’s been years ago and I don’t know if I could even find it. I had always planned to take it in the car out to the park or woods and play electric guitar. Don’t think I ever did though.

I’m pretty sure I have seen an amp on the market that will run on 12V DC or batteries or something. You may have to look around, but I think it’s certainly feasible.

If you’re using acoustic instruments, and you can get them to use an outdoor space that has some acoustics that help contain rather than dissipate the sound, it might help. Forest next to some large rocks or cliff maybe. Beach would probably be too noisy and dissipating.

You’d be pushing that car battery. No doubt in my mind it would work, but for the alloted time it’s pushing the envelope. You could always tell the overly romantic bitch to throw you a bone and a practical thought for once in her miserable and pathetic life. It’s the last one she’ll have before her husband starts coming home and beating her to a pulp in a drunken stupor because she covered all their outlets at the house with wallpaper because she thought they looked “icky”.

My better half is a harpist. She’s used a battery-powered guitar amp and a Dean Markley pickup on outside jobs for decades.

This amp, purchased at Best Buy as an experiment, is an ‘Uptown’ and runs for hours on 8 ‘D’ cells. It’s not a great amp, but does the job in the worst possible acoustic-- outdoors. It can be run on 110VAC too. It’s plenty for 25-30 guests.

Brides can get nutty ideas about what they ‘must’ have…

This amp, purchased at Best Buy as an experiment, is an ‘Uptown’ and runs for hours on 8 ‘D’ cells.

How long can she run it?

Brides can get nutty ideas about what they ‘must’ have…

How about this one: 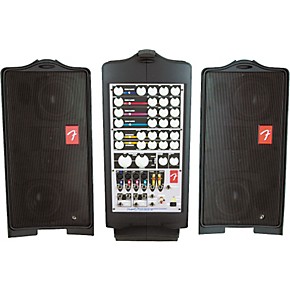 Get the guaranteed best price on Live Sound Packages like the Fender Passport Deluxe PD-250 Portable PA at Musician's Friend. Get a low price and free shipping on thousands of items.

Huh. I didn’t know those ran on batteries.

I wonder how long it lasts?

You’d definitely be significantly better off finding a battery powered option over a generator. I’ve seen so much gear destroyed by generators. It’s crazy.
To use generator power, you’d be best to use one that is regulated, and those are not inexpensive.

It runs for hours on one set of D cells. Three hours anyway-- probably more. IIRC, the Uptown amp was only $50 at Best Buy, but it was the better part of 20 years ago…

We got it as an experiment, and were successful.

I put a back on the cabinet with heavy Velcro to control feedback-- the Markely pickup is very sensitive.

In our experience, the wedding planner isn’t our ally. They miss cues, give wrong instructions, etc. and then the musicians take the heat.

This amp, purchased at Best Buy as an experiment, is an ‘Uptown’ and runs for hours on 8 ‘D’ cells. It’s not a great amp, but does the job in the worst possible acoustic-- outdoors. It can be run on 110VAC too. It’s plenty for 25-30 guests.

I did a search online for the Uptown and don’t see it at Best Buy. Do they still make/sell them? I did see the “Roland - Micro Cube GX 3W Guitar Amplifier - Black”, but it’s $150. I was wondering because in the back of my mind I thought that one was battery powered. I have seen them in music stores for years IIRC.

In addition to the AC adapter, the Micro Cube GX can be also powered with six AA batteries (optional).

Six AA batts is probably more affordable than 8 D’s (and lighter for sure!) if used quite a bit. I don’t know the run time though.

Lots of battery powered options on eBay and Amazon. 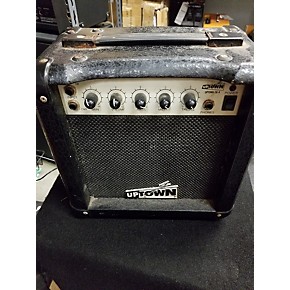 For greater savings check out our Used Uptown SK-8 Guitar Combo Amp and get a great deal today!