I just had two friends ask me if they should pick this up. First of all its a hell of a good price. I’m gonna recommend this to two people who asked (and anyone else who’s curious), under the assumption that they are not going UAD anytime soon. I’ve been working with this set for years and here’s what I’ve found its able to do that nothing else except the UAD does as well. If anyone is interested in demoing it, here are some features you may want to pay close attention to:

The noise gates. It is almost impossible to mimc the response curve of this gate. I have no idea why you can’t make a stock avid or reaper gate act like this. I first tried when I had a church client that didn’t want to buy the waves plugins but needed to be able to send me a template that mimicked the settings of most of my Waves plugin on Pro Tools on a weekly basis. That was when I found out these gates really do have a unique sound.

Accurate distortion - when you hit the input transformer of an SSL just right you get a little bit of grime and saturation which to me is pretty distinct in the 2k and 8k registers. I personally don’t care as much about ground noise modeling. There are plugins from Kush and Soundtoys that attempt to mimic SSL console distortion. Slate has one too but they’re built differently. The way Waves did this was to try and model the ratio of drive/harmonics to gain, so that as you saturate it drive is introduced proportionately. So try ramping up the input and backing down the fader. You may like what you hear!

Another thing I like about this is the fixed bell curves at 5 and 8K. That HF bell curve was a huge part of its signature sound in the 90’s and early 2000’s, but its still pretty relevant even by todays standards. If you really only need the EQ, you can grab the EQ plugin without chewing up the processing power having to call up the entire channel strip.

Speaking of processing power, I have a UAD octo and max that damn thing out on a regular basis. The UAD version uses up an insane ridiculously amount of DSP. There are many times I’ve had to fall back on the Waves one because the UAD one kept locking my rig.

The OMG bus compressor - The other reason I think people should buy this is because that Bus compressor is a rockstar. When you demo this, what you’re listening for is the added punch and extra glue without the thing disrupting your stereo image. You want a listen to how this compressor adds but with just the perfect amount of effect. Its assertive but it doesn’t dig too hard. …when you demo this you have know what you’re doing here, but I’ll give some pointers. Start with your attack on 10 (at 2 o’clock) and the release either on .1 or on auto. My ssl bus comp NEVER leaves 4:1. If I need a 2:1 or 3:1 I go for a different compressor. If I need slow release I go to a different compressor. You probably want to listen to subtle differences between 2-3 db GR, 3-4 GR, and 4-5 GR. If you’re pounding this thing at 12 db then that means you don’t know how to use a 2 bus compressor.

Vs Steven Slate - Yes, Steve Slate has an SSL lookalike in the everything bundle. He also has an SSL console drive, and and SSL shaped 2 bus. For both of you guys reading this who asked me that question, since you both have the Slate subscriptions, I would say go demo them then you tell me if you think they sound anything like each other. The question isn’t if they sound like an SSL. The question is if you notice an immediate difference between the 2 plugins.

It’s only $93.83 at everyplugin.com when you use the code “YNY23” in your shopping cart. Also, if you own any of the components, you can email Koby at everyplugin and he’ll quote you the “upgrade” price. (They probably will at AudioDeluxe as well, but I’ve never done it there.)

It is almost impossible to mimc the response curve of this gate.

Is it? I have an SSL 611dyn sitting here on my desk. I’ve looked at the gate (although I only spent about 10 minutes looking at it) to see if it was doing anything that every other gate isn’t doing, and I couldn’t find anything non-standard about it.

Waves had just the bus compressor on sale a little while ago. Man, if I had read your review of it here, I’d have snapped it up then.

@Jonathan - Out of curiosity, have you tried the Plugin-Alliance consoles? Those have gotten some good press.

I’d be curious to see if someone has gotten Boz’s Manic to replicate this. (Ha! Boz just replied while I was writing this!)

@Jonathan - Out of curiosity, have you tried the Plugin-Alliance consoles? Those have gotten some good press.

Aw man! I didn’t even know about it.

But this is really cool!! V V V 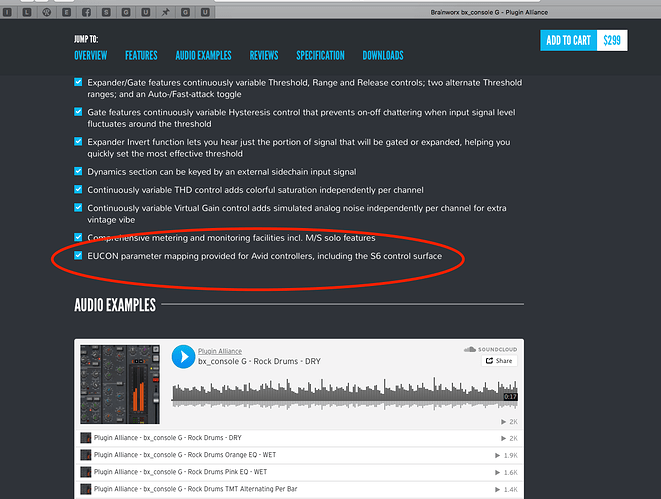 I’d be curious to see if someone has gotten Boz’s Manic to replicate this.

I didn’t model manic off of anything specific, so the SSL will likely sound different. In my quick tests, the SSL curve is closest to the “clean” mode on Manic, but they aren’t the same.