Does any one have experience with the quality of these plug ins included ?
Price wise I would say its a nice deal, but dunno how the reverbs sound and such, so…

I’ll only talk about the ones I have experience of. I’ve used the De-esser but not for many years - I remember thinking it was fine and easy to dial in.

S1 Stereo Imager does the job of making the stereo field wider or narrower - sometimes that’s handy on something like a reverb return. I have Trueverb and Supertap, they both work as advertised but TBH I never use them - I just don’t have the patience to dial in the individual taps on a delay in most cases, I guess there might come a time when I find a need for it. Trueverb is fine as a generic reverb but I thought it was a bit bland. 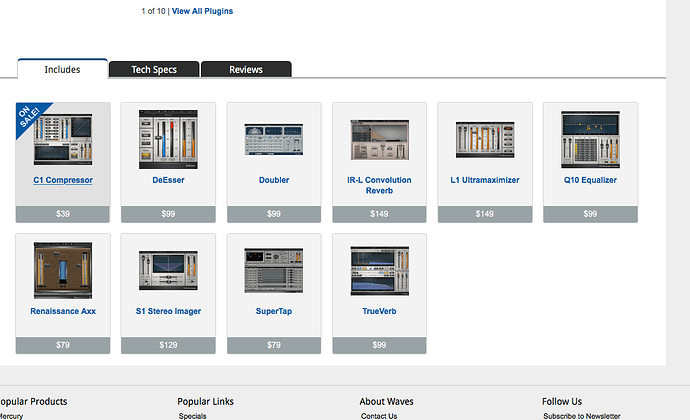 Wow. This is a hard call. Your DAW will do a lot of this stuff. And these plugs are OLD. The supertap has a nice workflow but the sound engine isn’t as good as the H delay. The IR-L comes with a ton of free expansions, about 5gb that can be downloaded separately. But I don’t use it at all now that I have Valhalla, Tsar, Exponential, and Slate. I constantly use the doubler in 4 voice mode. It works wonders on widening dry vocals. I favor the R-desser over the one included here, but the one here will work. The L1 is probably the most usable plug in this bundle. I’d rather have an r-vox over an r-axx. The s1 is only useful to me when coupled with the Waves Center imager. The q-2/4/6/8/10’s are the most generic EQ’s on the market, and they don’t have built in spectrum analyzers. Nor can you solo frequency bands or adjust the q slopes. This EQ is only famous because it was better than everything else 20 years ago when it first came out.

I dunno. This comes down to how bad you want the doubler and that L1.

AW SUCK! I just realized that’s the L1 maximizer and not the L1 limiter. No…don’t buy this pack.

I have all the plugs in that bundle except the irl. They are fine and 199 is not that bad. But IMHO, you would do better with the Renn Max bundle and one of the Musicians. They go on sale all the time
Also did deep into some of the EMP toolbox bundles. Even if you don’t do edm, they have a different selection of plugs.
The Renn stuff is pretty awesome. I didn’t want to have anything to do with them. But I find I use them all the time now.
There is a $20 coupon code active for today only WAVES20. So the powerpak would be 179 if that makes a difference. But I’ve accumulated all those plugs without buying powerpak and I’m sure I didn’t spend even 179 on them.
Actually… I’d look into musicians 2 for 79 with the coupon code today…
have fun
rich

@DeRebel, which DAW are you using? This will likely determine if that package will do anything your native plugins won’t.

L1 maximizer and not the L1 limiter

The maximizer is a limiter. L1=L1

The maximizer is a limiter. L1=L1

Fuck me. I didn’t even know that. I assumed they were different because of the picture. Just checked the website…the L1 and the L1+ (which is the maximizer) both come with the license.

Yup… But I didn’t even know that they still offer the original . I thought that you just turn off the addl features. I have the L3.
So we both learnt sumpin today…

@DeRebel, which DAW are you using? This will likely determine if that package will do anything your native plugins won’t.

The thing is, atm I only have the stuff that comes with cubase.
I’m thinking of getting the fabfilterprob eq, cause I used a cracked version one’s and it was realy nice, but for the rest I don’t haveanything. So I saw this and thought, hmm, thats a little bit for everything. I mean, some reverbs, compressors de esser… I could do a complete mix with this I guess. At least to some extend. Not sure if its a multiband compressor ? cause I’d like to try that parallel compressing.

To go further on that. My goal is to realy get into recording/mixing, so in time I’ll need quite a bunch of stuff I guess, and atm I still have to wait to start building on the studio, so spending a lot of money on stuff I’m not gonna use later is kinda stupid I guess

Hence all those questions

AW SUCK! I just realized that’s the L1 maximizer and not the L1 limiter. No…don’t buy this pack.

Does this difference make such an impact on wether or not to buy this pack ?

I’ll check it out

If you want to get your feet wet in the Waves world and expand your capabilities, I’d stick with my last recommendation. Musicians 2 for $79. It has ren ax, renvox and rencomp as well as the doubler and trueverb. The ones from powerpak that are “missing” most likely won’t be missed.
You can get a good L-1 limiter for free (google W-1) as well as de-essers (spitfish, lisp)
Once you’re have waves central installed, it will be hard to resist getting a bunch of stuff. But waves does run tons of sales and has like 6 plugs on sale every weekend (sat and sun). Don’t buy anything at full price cuz it will go on sale the next day…

Yeah I’ve bin seeing a lot of adds last few weeks from waves and saw lots of deals. Didn’t know it was the year round

Well, I’m not sure where to dive into to be honest. Would be nice if I could borrow a studio for a few weeks, lock myself, and test them all out to see witch one’s I like

Maybe I’ll make a thread about it, so people can recomend stuff

@rjwillow, ha! You’d better believe they still offer it. That would be like McDonalds discontinuing the big mac. I genuinely like it. It takes a lot of flak, but its a good plug imo.

Well… not to be a waves fanboy… But once you install waves central, you can demo anything you want. So it’s like borrowing a studio.
Just don’t demo too much stuff at once. I did that once and didn’t even get thru 1/10th of what I had on demo before I got burnt out. Waves was actually cool about that. I told them what happened and the rep laughed and “reset” my profile go I could dive back in…
Anyway… good luck
rich

. I told them what happened and the rep laughed

Ok, good to know, then I can try some stuff out soon !