I guess today is the last day of Waves’s plug-in sale: buy a $29 plug and get a second for a dollar. I was looking at their $29 offerings. Not much i need right now (I got their Classic Compressors Bundle and their Gold Bundle and RMaxx Bundle on Black Friday, at @Jonathan’s recommendation – very pleased with those BTW).

I’m thinking about their J37 and/or Kramer Master Tape plugins, as i don’t have much in the way of tape saturation. Would love to know if anyone here uses them and whether you’d recommend them? Would they complement each other? Or would one be better than the other? Or maybe neither of them are worth it?

Or if there’s another plugin you might suggest that might complement my Gold/RMaxx bundles, would welcome that too.

I’m not strongly in need of anything right now and really need to just learn to better use what I already have, but just sayin’

Already having a rough idea of what you have in your library, I recommend getting the smack attack and H-reverb.

The H reverb is a stunning sounding and highly versatile verb. I use it all over film and video game tracks. I think its one of the most gorgeous sounding reverbs anyone has created to date. Very easy to dial in.

The smack attack is for adding punch and tightening the decay of percussive sources, but it works great on bass guitars and acoustics too. One way to add snappiness to a kick drum or make the attack of an acoustic guitar is to saturate upper register frequencies. The other way to to do it is by using a transient shaper (which is what this is). Say you want a fingerstyle pattern on an acoustic guitar to pop just a little more. What the Smack attack does is grabs the first few milliseconds of each pluck and exaggerates only that tiny chunk of audio. But it does it over and over every time the player strikes the string. So its accenting the attack of each note, without bothering the rest of the tone, or by adding un-natural artifacts that you’d get attempting this with an equalizer.

Both of these (in my opinion are a higher priority than tape saturation). The J37 is much newer and better than the Kramer. The Kramer is almost 15 years old and hasn’t been updated. If you do get the J37, the Kramer doesn’t offer much.

Nice, thanks. Now, I do have several verbs from gold/rmaxx. The IR-L Convo and TrueVerb are nice, but the Renaissance Reverb is the nicest of that bunch, IMHO. So, the HReverb would definitely be a step up for me still, over RVerb?

I’ll check out the smack attack. Thanks!

I love the R4 reverb

The Kramer and the J37 are very different .They not only saturate but are also very good at tape delay.I think you would be happy with whatever one as they are both really good.The Kramer is older than the j37 but is still a very good plugin

So, the HReverb would definitely be a step up for me still, over RVerb?

A BIG step up.

Agreed. HReverb is great sounding. I remember a couple years ago talking to @Jonathan about reverb algorithms, and HReverb is the only one I’ve found that does it the way I thought reverb should be done.

Okay, so I did it, @Jonathan. Pulled the trigger and got the H-Reverb and the Smack Attack. Haven’t had much time to mess with the smack, only a few moments, and it’s sweet.

I did have a chance to mess around with H-Reverb and all I can say is, “Wow!” That thing is amazing. Stunning sounds, very versatile and actually fun to play around with. I didn’t know you could do so much with a verb. I’ve always kinda liked the convos. This thing is impressive. I don’t know that I’ll use my other verbs after I get used to this. Very cool.

Thanks for the tip. I’m very happy now. I thought I was happy before, but now I know what true peace and bliss is all about!

Seriously, though. Lovin’ this thing!

Cool man! So do you have a pretty good handle on what’s going on with all the controls? 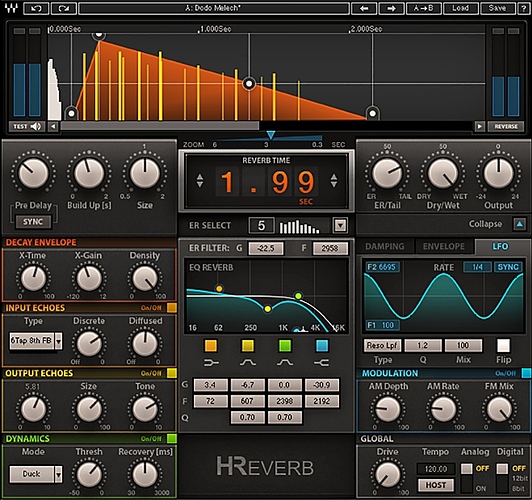 Same here…I still do. This one is an algo verb obviously, but to me its not about algo vs convo. I don’t think one has the upper hand over the other until it comes down to application. Convos are better for simulating environments… like if I have a dialogue film scene in a gym locker room or parking garage, I’m gonna reach for a convo for that. But I find algo’s really musical and easy to set in a mix.

Cool man! So do you have a pretty good handle on what’s going on with all the controls?

For the most part I do. I was never aware of how many variables you can manipulate in a reverb effect! This thing’s amazing!

I don’t understand what is meant by input echoes. I’ve watched a few tutorials and none have explained that.

The other thing I’m not clear about is the envelope thing. Does that override what’s in the main window?

Would love to hear any projects you’ve used this on.

So I’m pretty impressed with this thing. I’m suspecting that once I get used to it, my other non-convo reference will go away. I’m thinking this might just replace all my verbs for the most part. Has it has that effect for you?