Waves Diamond bundle on blowout for US$249, whereas their regular price is US$2,999. Hard to beat that price I reckon… Available at the Waves website or at Audiovox, so I assume all the plugin vendors have that price too.

Were you thinking about buying that?

Were you thinking about buying that?

Mixed feelings. One the one hand, 68 plugins for $249 is about $3.66 per. Can’t imagine they’d ever be less expensive than this. They have some classic hardware emulation, a couple of which I already own, and I also have the GTR amp sims, but all the rest would be new to me. They’ve been around for a long time and have a very solid rep.

On the other hand, Waves interfaces look a little dated, and the Waves Central install portal is less user-friendly than I’d like. Much of what these do I am sure I already have other software for. And in terms of workflow, I’ve come to rely more on integrated sets like Izotope rather than a flurry of individual plugs. Do I really need these? Probably not. I’m already faced with paralysis by analysis much of the time when I’m working on a project, having so very many options at my fingertips.

Plus, I have been scolding myself for not having gotten anything done in the studio since I did the Fever cover, and that was the first tune in several months. Told myself, no new plugins until you complete another song!

So I’m torn. Will have to decide by tonight!

. I haven’t done anything very useful since Fever either. About time to stop plugin fever and get some recording done!

Ended up skipping it. I asked myself, would I go buy these 68 plugins even for $3.66 each? Answer was probably not. Held to my resolve, not buying another plugin until I complete a tune!

So now its on sale for $400 instead of $250. Right? I feel real bad for any chump that unknowingly spends $3000 on this bundle. That’s just not fair in my opinion. The same way I felt really ripped off when I paid $1800 for Nuendo and the dealer (Sweetwater) didn’t bother telling me that there was a competitive cross grade that could have saved $800 then didn’t do anything to fix it. (Especially since the reason I qualified for the cross grade was I bought almost $60,000 in PT hardware from them). ~Sorry. Rant over.

I had to get setup for a show before I had a chance to chime back in yesterday. I think you made the right choice. I didn’t want to discourage you and I think you went about assessing the decision wisely.

A lot of the ‘value’ of that bundle in my opinion is the sound restoration software. Its not cheap, but its not great compared to Izotopes. And its stuff I don’t think a lot of people use. I also noted right away that you have the Scuffham stuff, and its way better in my opinion. Also, I remember you buying one of the standard Izotope bundles a while back. You already have the equivalent of much of this. Waves Comps, EQs, Limiters, and MBC’s are all accounted for in your other plugin sets. I don’t think you missed out on much.

There is one plugin simple to use and highly effective plugin you may want to look at - that’s the Maxx bass. It helps bass guitars translate more consistently on smaller systems such as phones and laptops. And it makes balancing the bass/kick relation tons easier. I saw @ColdRoomStudio use it on a thread, tried it myself, and its one desert island plugin that I absolutely hate to be without. I don’t know of any other plugin that does what it does (though I’m sure there are some). I place it on a bass track and twiddle these two knobs until you can hear your bass clearly with the subwoofer bypassed. There’s no firm criteria on where you place these controls. I just nudge them until I hear the bass come through better. Powerful and easy little bugger to use! 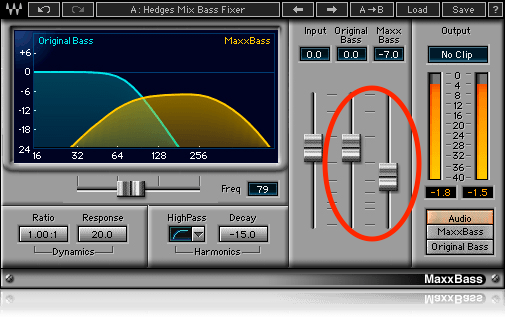 And today, it’s a one-day sale on their “Horizon” bundle for $299… Looks like Diamond plus another 7 plugs. Same logic applies here I reckon… gonna pass. Will keep an eye open for the MaxxBass to go on blowout though, and demo it in the meantime…

You mean to tell me you don’t need a good surround sound compressor? lol …besides that thing and those Kramer compressors, I don’t see much of a difference in that package.

What reverbs are you using? I can’t remember what you have.

What reverbs are you using? I can’t remember what you have.

Hell, I can’t remember what I have, could hardly expect anyone else to!

The reverb I go to most often is called Fusion Field, by QuikQuak, which comes as part of Mixcraft. MC also comes with Kjaerhus Audio’s “Classic” plugin set, which includes a reverb (along with a chorus, delay, phaser etc), and a KarmaFX set of reverb, delay, chorus; and Equalux Orb7000 (mostly a mangling verb). I have a similar number of delay plugs, most of which also come stock with MC, but my go-to there is usually Boz’s Imperial Delay.

I don’t believe I have actually purchased a separate reverb, just used these many options that come with Mixcraft. And just for completeness’ sake, here is the list of Waves plugs I own:

I’d highly recommend demoing the Waves H reverb. Besides the MaxxBass, that might be the next plugin I’d add to that collection, but wait for it to drop to $29 of course. Mixcraft has a multi-band compressor? Correct?

I’ve never been picky about delays. My go-to is the H delay, but only because of how simple and efficient the layout is.

How did you end up with the 2A and 3A but not the 1176? I thought you grabbed the classic compressors bundle. No?