So I went ahead and bought this thing. I was able to get it for $14.50 directly from Waves though their upgrade program.

Overall, I do not recommend the Mastering Chain unless someone has a fairly in-depth working knowledge of compressors from this era. It is not very versatile and highly specialized. The value in these plugins is the saturation, non-linearities, and the compressors. I’m not convinced the EQ has much to offer. 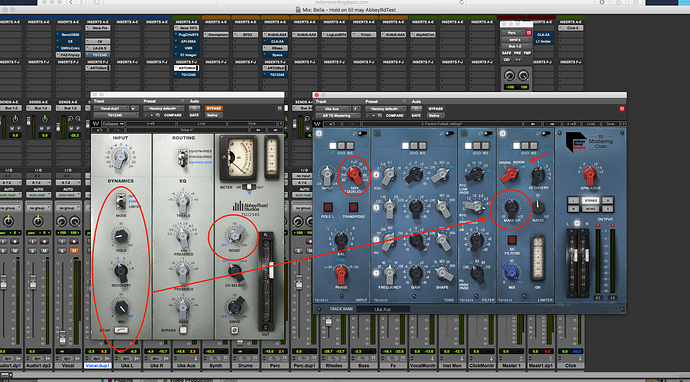 After close repeated listening I was eventually able to identify the differences in the behavior of the two compressors. With input and output levels meticulously matched, and all other TG modules bypassed, the TGMC compressor was more open and snappy. The effect of the 12345 gentler on low end LF information similar to how a the ‘thrust’ control is able to vary the LF response of an API2500. I don’t care for the modern mode on the TGMC. To me, it defeats the purpose of using an EMI style compressor.

These plugins appear to work as channel strip ecosystem. Meaning that the non-linearities compile and accumulate en-route to the channel strip fader. The one place I could see myself using these is instantiating the unit inside the Scheps omni strip and turning off everything except for the compressor.

Bottom line:
Even for a $29 sale price, I’m not impressed enough with this channel strip to recommend it to anyone unless they have a specific need for its distinct flavor of compression. I suspect many people will buy this and never use it.

I got it for $32.76 at Plugin Discounts. Looking forward to seeing if it’ll give me some different flavour options. Thanks @Jonathan for the OP… I may come to the same conclusion!

I do! I’ll give them a little wildly unscientific test this weekend. Truth be told I’ve not really used the 12345 so I’ll have to get used to how they both operate.

I have the TGMC and for my first use I put it second to last in in my mastering chain. It gave my project wonderful separation, a wider field and very impressive 3D feel. If this is all I ever use it for (won’t be), It is completely worth it at ten times the price. I have only scratched the surface though, I’m going to try it in different scenarios going forward.

I’m going to try it in different scenarios going forward.

Works great on drum busses and background vocal busses. The compressor is a really relaxed vari-mu like a fairchild.

Yeah. Get them both. The type/category of the compression is the same, but the guts of the original units are different. Nice to have options.

The most important distinction between the two of them is the drive knob on the 12345. That knob alone is worth the price of the channel strip. This channel strip can shine when the EQ and compression are doing nothing, and you’re using only the drive knob to just saturate and fatten stuff up.

In the Waves family, I go back and forth between the Scheps drive and the 12345 for character and saturation, when the Cobalt, Manny, and Vitamin are too much, and when you don’t want the Abbey Road tape sound.

Thanks Jonathan, exactly the feedback I needed. I have Cobalt, Vitamin and Abbey Road Sat. but not the Manny(distortion?) I’m experimenting with strips inside NLS and different shades are always welcome.

I may be in the minority of people who see it like this, but for me, and EQ is an EQ for the most part. But compression and saturation are two things that I still love having a wide range of options at my disposal. Give the Scheps a try too!

I’m similar, I do feel that pultec style EQs have a curve that does something for human ears that is special and unique,

I have the Omni and the 73, love em. Got a lot of experimenting to do with the Omni, I’ve only had it for a month.

I did buy the 12345 yesterday but have not used it yet. Prob work with it today.