Here is my entry: Wasteland - Mix By Kevin White. After upgrading/adding 32 gig of RAM on Black Friday, I have had tons of issues and crashes with PT, thunderbolt port (pc), and MADI sync issues, so I did not get to complete my ideas , but at least got a mix out before another crash this morning. Here it is…

Thank you for the beautiful song, Cristina!

The song itself had a lot of emotion to begin with so an easy 3 here, why not 5…I think the additions are not able to carry the emotions forward. Vocals could have used a bit more emphasis on certain parts, breaths etc

Creativity (additions and their effectiveness)
Score: 2/5
The additions were interesting and creative, great +2 for that
as for effectiveness the additions are not able to glue the song together, specially as they progress towards the chorus, i felt disconnected from the song, could be the choice of the sound on the guitar. The notes played were great, they could have been super cool on an ambient piano distant and not so dry upclose.

Mix related (full weight)
aesthetics (effects)
Score: 7/10
Overall the aesthetics were sound. No effects stood out as harsh or overdone.
Vocals are muffled at parts, overall track could have used a bit more EQ work and width.

Balance (tone, levels, clarity)
Score: 6/10
Good full and fullfilling sound but from additions of low string bass sound gets a bit clogged (mud). A bit of eq could have carved out some more space in the mix. The mix sounds mastered or run through some kind of compression gain limiting with less than optimal parameters which is squashing the sound and raising the noise level. See pic below (more fishbone pleeease) 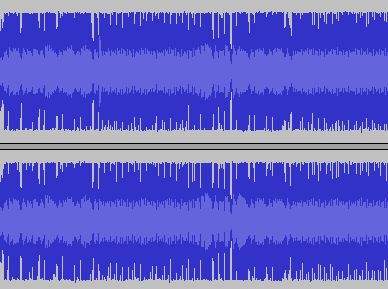 A little on the brickwalled side, I’d totally ease off the compressor. Also, sounds like there’s a huge midscoop, particularly on the vocals, and it makes the whole thing sound out of whack. The backing vocal seems to be drowing out the instrumentation, I’d back them off substantially Mr. Jetwolf sir. You could also use sidechain comrpession after that to bring the instrumentation down whenever the backing vocals come in, by throwing a compressor on the instrument buss, and then adding the backing vocals as a receive on a sidechain. That would sound pretty damn good. Another way would be to carve out the frequencies from the backing vocals that are most present in the instrumentation. That way, the backing vocals will blend with them better. They might sound a bit wonky soloed, but they’ll sound great all together, and a commercially released track does not allow the consumer the ability to solo, yet. I like what you did with the drums, I’d like the midrange though so they’d be more defined. Mix on.

Hi Jetwolf,
I liked very much the intro guitar and the cello.
I am not to fond of the solo sound. I think it doesn’t go with the song too much.
Also, as mentioned, it sounds a bit overcompressed.
I don’t know if I’m right but it sounds to me like you 've sidechained the vocals to almost everything else, and the music lowers in volume whenever Cristina sings. I believe this work better if it was a bit more subtle.

Glad you were able to get this done and join in. I feel like you have a nice balance of elements and i especially like what you have done with the drums. The solo instrument just doesn’t quite fit. Could be what is played or the mix but probably a combination of those two things. I think pulling back the volume on it some would go a long way. Thanks for sharing.

Thank you all for the feedback.

Pertaining to the keyboard solo sound in the middle, I had just written the part and that sound was one I was playing with on a test print and not ever meant to be public. I planned to change the midi sound to strings and piano of some sort and also add more layers to make it lush, but, unfortunately Pro Tools stopped seeing all of the proper channels from my interface when my Thunderbolt port went bad, so I could not open the song until I got the issue sorted out. I already had other cello harmonies finished that weren’t on the test print, but I was glad I at least had something to send in.

I worked for several hours yesterday in the bios, replaced fiber optics cable, moved my card to another slot, removed and reloaded all firmware and drivers in my interface and pc, and finally got the thunderbolt port working, but now the Pro Tools session is corrupt and still won’t open. Hopefully I can translate to another session and get it open tonight.

I am a technical person by nature and profession, and I am constantly battling my rig. Sometimes I wonder how a non-technical person/studio owner manages to keep their systems going.

As is, I agree, the solo sticks out too much since it was totally dry, and I would likely have not used that sound either, but I never would have left it that way as it stood.

Even though the sound that was printed was totally unintended, perhaps it could have been spacey cool if I would have had the chance to mix and add some echo, though? Or, more likely, the strings/piano idea would have worked and blended better overall?? Lots of fun directions to go.

Looking past the abrupt tone, I was at least pleased with the tension created in the chords I embellished, and, for me, that is the hardest part… I wasn’t necessarily cutting the guitar solo, either, but I was not sure yet if it was going to blend with the added chord textures. Guitar is my first instrument, and I had originally planned to add guitar par

Once I get my system sorted out, I will post the remix, even though I understand only my first mix will count.
Hopefully, it will turn out like I hear it in my head.

Maybe I can at least earn some extra credit for going for it with the bold addition ; )!

In answer to an earlier post; There was no sidechaining used.

Happy New Year to all and good luck!

Good luck fighting the demons in the machine!
Regarding the sidechain comment:
I’ll have another listen on my speakers to get another perspective. This is how it sounded to me on earplugs.

@jetwolf contrabass addition was tasteful, soulful notes. Though a bit loud for the song, but it could also be your compressor. The overall mix is overcompressed. Any chance you can remove your limiter and post an updated mix ? I understand that only original mixes should be rated but Its more curiosity at this point.

I do like the chord sub surprise at 2:40 , nice touch.
instrument is too loud though, again could be compressor.

First off, very sorry to hear of your technical issues! That gets irritating - fast.

This was a mix of extremes for me. There were things I really really liked, and some things I really did not like.
Likes:
Vocals! Beautiful!
The main guitar! Nice and delicate non-resonating.
Bass/strings! That’s all. Sound really good and tasteful.

Like - not:
Kick drum. Wow! That was loud and in your face. Too distracting and “present” for my tastes.
Solo. OK, I see what you were trying to do, and you get points for creativity because it was a cool idea, but it just didn’t work for me - at all. Sorry.

Definitely more upsides than down to this mix. The “like-nots” are easy things to “fix”, IF they are really problems. But what was good, was really good! Bravo for your creative efforts! 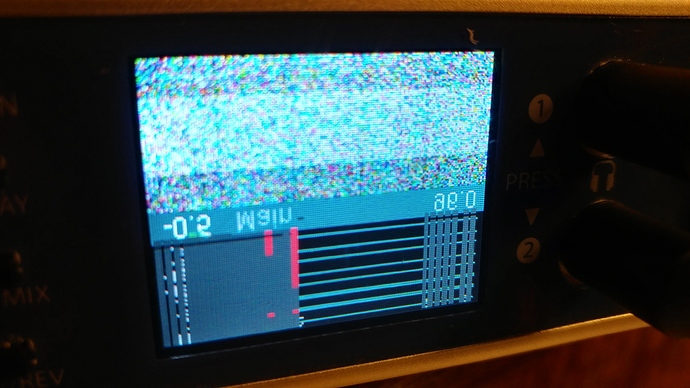 Well, looks like it was not my thunderbolt port going out. That would have been much better than discovering that it actually was my RME interface going bad $$$$$$$$$$$$$. Here is a photo of my interface screen which appears upside down, inverted letters, and gibberish.

Just mailed it in for repair. No telling how long I will be out o commission. I really wanted to finish this song, plus I have mixes that I really need get out, too…

Ouch… That sucks.
Which RME do you have? RME is supposed to be top quality…
Very bad luck.

With the huge sounding kick drum, since the song generally lacked low end, I chose to add low strings and then embrace the ultra low kick and see where it would go from there in filling out the low end I actually had other low strings that I did not get to print…

I imagined a HUGE ogre sitting next to Cristina playing a HUGE drum set!!

But, I may have overdone the kick a bit, but it was meant to be big.

I appreciate your feedback.

already did my input previously (monitors AV40s, treated room)
this is an earbud pass (hearing your mixes on some terrible samsung earbuds)

Mix translated on earbuds surprisingly well, considering it was aggressively compressed.
not much to add other than what was previously mentioned and mentioned by others.

Nice mix!! A lil too compressed by a limiter I guess, everything is really in your face… If you back off the compression it will give room for other elements in the mix and you’ll feel more depth in the mix!

Hey, I read that you had some (many!) technical problems with hardware…
This is the first time that I see RME hardware being faulty, what a pity! And it looks serious!
Do you have any backup solution when things go wrong? I wish you had…

By the way, besides obvious points coming from previous comments, I don’t really have many things to add.
The overall mix sounds spot on, the addition could be great (until you finished them), the balance sounds appropriate…

Nice job, I hope you get your stuff back to finish this mix so we can listen to what you had in mind!