I’m curious how you guys de-breath a vocal track and what you use? Techniques? Any must-have plugins?

I personally just edit those out if they are too obnoxious

For dialogue and voiceover editing I enable tab to transient then manually delete the problematic breaths using shuffle mode.

If I need a plugin to remove them, I use Izotope de-noise in AudioSuite mode and immediately commit/render it to track.

If you need something super precise, RX allows you to manually lasso the problem frequencies over the entire track and delete them as if it was photoshop. RX automatically fills in the specific frequencies you delete by calculating a replacement based on what was infront of and behind the portion you selected to delete. 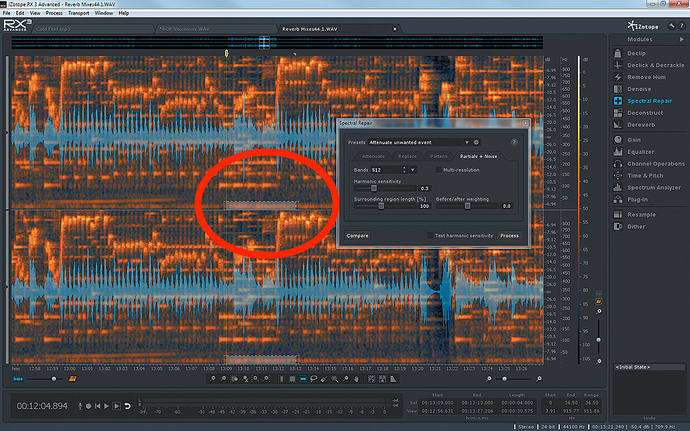 I wouldn’t call it must-have, but I got the Waves DeBreath plugin a few years and was pretty happy with it. I haven’t used it in awhile and have not reinstalled Waves plugins with my computer rebuild because my older versions are all 32-bit and I’m preferring to stay 64-bit exclusively as much as possible. That, and Waves installation procedure is a pain in the ass.

I do miss them though, I may give in at some point.

However, there’s a learning curve with the plugin, just like anything else, and there’s a learning curve to editing them out - so it depends on where you want to spend your time. For the manual methods, you can split the audio and do clip gain on the breath (so it isn’t gone completely … just less noticeable), or do vocal automation (drawn or recorded with fader), or split the audio and do fade-in/fade-out in some cases. Or you can nuke it completely if you don’t want it, if it doesn’t sound clunky.

Since I almost always have a volume automation on my lead vocals track, I use it to reduce the breaths and mouth noises. I usually reduce between -12dB and -25dB, prior to compressing.

I have tried to use Wabes DeBreath a couple times but it kept on cutting some of the desired vocals along with the breaths, or only removed a small part of the breaths if I used a gentler setting, so I mentally categorized it as useless but with some disappointment, as the Waves plugins are usually good. Did I miss something?

On backing or harmonized vocals, I usually just edit (remove) them.

just edit those out

This is what I’ve been doing but was wondering if there was a silver bullet of sorts.

RX allows you to manually lasso the problem frequencies over the entire track and delete them as if it was photoshop. RX automatically fills in the specific frequencies you delete by calculating a replacement based on what was infront of and behind the portion you selected to delete.

I watched a tutorial on this. Very slick but not in my cards right now.

I was looking at this and this is what made me ask the question. FWIW, the Waves installation has gotten much better. I have had a problem at all in the last couple of years.

Wabes DeBreath a couple times but it kept on cutting some of the desired vocals along with the breaths,

This is main issue with automating it. Then you have to go back anyway and “fix” things that the automation didn’t catch. So you spend twice as much time doing it.

I’ve got Studio One with Melodyne integrated and use it for some tuning. As much as I dislike the UI, for now I think I’ll study up on it and see how well it works. Thanks for the replies guys!

I also edit/automate to lose the breaths. I rarely sing anything sufficiently rapid-fire that I don’t have plenty of space to zero out the breathy bits.

Once I told a singer her breaths were making the entire song unusable. I told her from here on out, she needs to do her whole verses in one breath. She’s standing in the booth, and I fed her a long story of how properly trained singers have breath control like olympic swimmers and if you can’t do a quick 20 second verse in a single breath, you may as well pack up and go home, and told her to stop at the gym on her way out the door because aerobics would make her breathe better.

Then her manager chimes in over the talkback mic "you know they jus messin’ wit you…right?’

Then her manager chimes in over the talkback mic "you know they jus messin’ wit you…right?’

Good save. I guess he told you.

You DO know that those crazy singers have incredibly fragile ego’s … right?