Training yourself to hear stuff

VI was just reading this thread about MP3 bit rates and something occurred to me…
http://indierecordingdepot.com/t/128kbps-vs-320/853/5

I remember hearing a a song I had mixed placed on a site that streamed mp3s at 92kb/s (don’t ask), and it sounded woeful. Pretty much mono, and all the cymbals sounded like they had been low passed at 4K and been put through a distorted flanger…

The interesting thing is that experience really clued me in to what kind of things happen to audio as you reduce the bit rate via data compression. As a consequence, I was able to discern more subtle differences between higher bit rates.

That got me thinking about the subtleties of hearing in the audio world. Hearing things like “bad” frequencies, saturation, reverb character, and the big daddy of them all - compression - is often very difficult for beginners in audio…even for some of us who are not beginners! It often takes years to train yourself to hear this stuff…

Amen Andrew! I am still struggling to hear the “right” things, as you know only too well. Especially compression, so your note about that is really well placed-- thanks! 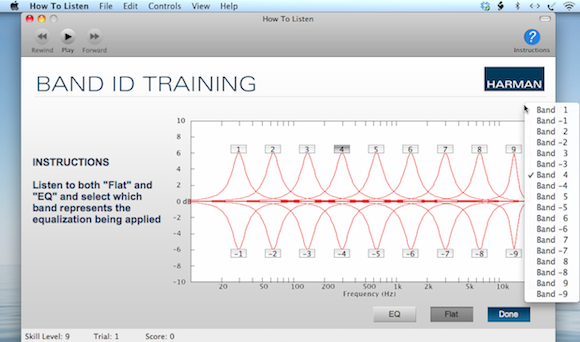 Welcome to How to Listen!

Overview How to Listen is a desktop software application developed by the Harman Internationa l R&D group for the purpose of training an...

That looks good, Dave! I might check it out myself…

Hence the reason I keep banging on about A/B monitoring. The human hearing system is not so hot at detecting the diference between stuff when you play one thing first then play another afterwards, but intrduce the ability to switch simultaneously between one source and another and suddenly we are empowered with super-human hearing. To me, it seems such a waste not to harness this super-human power in our mixing.

I am in violent agreement Adrian @AJ113… doing a/b on every mix iteration is the only way I can make progress and have some idea what I’m changing and how it affects the whole. Absolutely my go-to in everything I do.

Hey! I picked up Mixcraft 8 Pro Studio today for my upgrade price from Pro Studio 7. Looking forward to checking it out over the weekend.

Hence the reason I keep banging on about A/B monitoring. The human hearing system is not so hot at detecting the diference between stuff when you play one thing first then play another afterwards, but intrduce the ability to switch simultaneously between one source and another and suddenly we are empowered with super-human hearing. To me, it seems such a waste not to harness this super-human power in our mixing.

Yeah, violent agreement here on that count too, Adrian. With compression in particular, it’s extremely important to volume-match to discern a useful difference.

+100 on a true A/B, and blind.
Confirmation bias is real. Blind (no visual cues)with someone else at the controls is even better.

Years ago, my bro and I were at one of his tube amp events and I, being a wiseass at heart set up a lecture at one of the tables. I had a project box with a very large military grade switch on it and a big shiny knob. I had a very thick piece of coax cable coming out of it and that ran under and behind the table. My bro had one of his 1626 “darling” amps playing generic fuzak the whole time.
I went on for a few minutes about how changing between taps made huge changes in frequency response and stereo imaging and/or how this or that unobtainium coupling cap enhanced depth of field. SO I would flip the switch or turn the knob and ask what folks heard. I did this 3 times raining down a different torrent of BS each time. Not ONCE did anyone have nothing to say and no one said that they didn’t hear anything different. I would have to pull the cable from behind the table to convince them that I did absolutely nothing.
But here’s the freaky part… One time, when I was turning the knob and making silent gestures to get folks to really listen hard

I actually swore that I heard it myself!!! I actually did a double take and fiddled with the knob.
The mind is a terrible(and wonderful) thing… :beerbang:

Harman stepped in and helped me out with monitoring/interfaces last year and I was advised to check this out by the audio dept cheif. It’s brilliant.
+1

The mind is a terrible(and wonderful) thing.

That’s why meters are so important. It’s fine trotting out the usual glib ‘your ears are the best pieces of equipment for mixing’ but our ears lie like hell whenever they get they opportunity. Eyes are much more reliable thanears, hence the plethora of meters available on the market today. In a debateable scenaro, I will always trust what my eyes are seeing on a meter over and above what my ears are hearing.

I figured someone would have posted this by now…

Wow, I had not heard of this before. Extremely fascinating! I mean bascinating.

And what do lip readers do then…??

I’ve downloaded that and tried it a few times. Was feeling quite smug for a while TBH but it didn’t last as I started tripping up badly at level…whatever…can’t remember. I must get back into it.

I get the point obviously, but I gotta be honest, something about that description makes me think I might have liked it in a perverted way!

Thanks for the OP!

[quote=“rjwillow, post:7, topic:868”]
Blind (no visual cues)with someone else at the controls is even better.
[/quote]Well, I guess so in an ideal world, but when it’s a technique you may use up to a hundred times during a mix I think you have to learn to trust your own judgement.

Well, I guess so in an ideal world, but when it’s a technique you may use up to a hundred times during a mix I think you have to learn to trust your own judgement.

Yeah, Buddy. I think you’re getting ahead of yourself, here…

Of course I’m talking about when testing and challenging your ears… not while mixing.
Yes, you have to know and trust your ears (and meters) when actually doing work and never worry about this other stuff…

And what do lip readers do then…??

I would hope that lip readers DON’T have folks intentionally messing with them like this… Fut if I knew that someone was trying to read my lips, I would seriously buck with them…:beerbang:

Hey there children, if I may suggest the best possible way I found to hearing the subtlest differences in audio. When doing comparison tests the main problem is not that you don’t hear the difference, most of the time it’s that we don’t know what to listen for. Once you pinpoint “that” thing, you could hear it almost instantly every time and even be amazed at how others cannot.
So the best method for me was to use an audio file I loaded up in my DAW (say it’s a WAV file and I want to listen to what an mp3 of various bit rates does to the signal), I export the file in various mp3 bit rates, and import them back into the session. Place them directly under the main WAV track and make sure they are perfectly aligned. Then I just solo the WAV file and say mp3 file of 128 kbs and flip the phase on one of the tracks. You instantly hear only the difference between the main track and the mp3 version. That there what you are listening to, is what is missing in the mp3 file. Once you hear what is missing, when you switch back to the mp3 you know what to listen for and the differences become more obvious (you’ll be amazed at how many things are missing in an 128 kbs mp3 file,and how little in 320 kbs). Same principle could be applied to almost everything, from subtlest harmonics to compression, to reverberation, just apply the effects on one track and then invert the polarity of the other. You hear only the harmonics, only the compression, only the reverberation.
Happy experimenting