Time for a new studio (a smaller one this time!)

I needed the consolidate my software developer rig and small broadcasting mixing setup into one room and be able to run it from one desk. The whole idea was to keep a super fast lean DAW running with minimal plugins, so I could spend a couple hours a week mixing in the box, then switch to a different operating system and do my software developer work for the rest of the week.

I intend to mount those GIK panels on the walls so I can stuff more of them in the room, and I have a stack of RealTraps triangle mega traps in the front corners.

I needed to rebuild a rig that was CRAZY fast. Since the speed I needed to achieve had a lot to do with booting up, importing files, rendering, and archiving, I decided to only use ONE daw, and the absolute fewest plugins I could possibly get by with. I only installed one DAW… ended up going with Nuendo though a little Focusrite Scarlet interface.

I wanted to eliminate every plugin I possibly could. The one non-negotiable though was Izotope RX. You can’t do what I do without it. However, after a few test mixes, I found I was just fine without my UAD plugs, but I still needed about 30% of my Waves plugins. So I loaded them along with the Seventh Heaven reverb, XLN Addictive Trigger and everything else, GONE lol.

So the main computer is the one in the right hand corner of the room, the only reason that old cheese grater MAC tower is there, is so I could deactivate all my plugin licenses and transfer them to the mac. The mic is a $12.99 Neewer NW-882. It’s sole purpose is for zoom calls with other software developers at work. 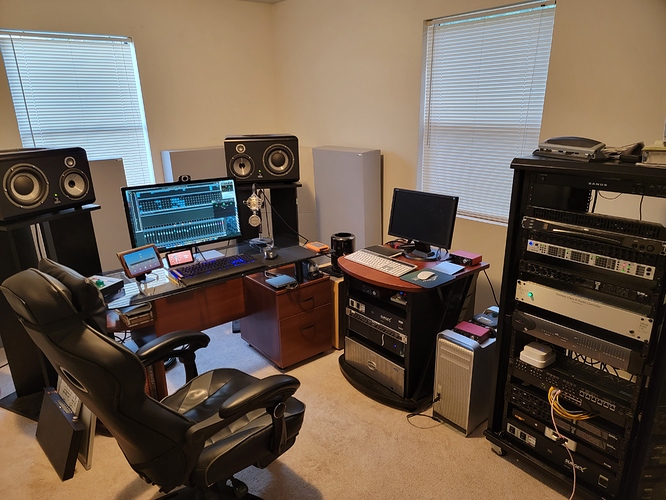 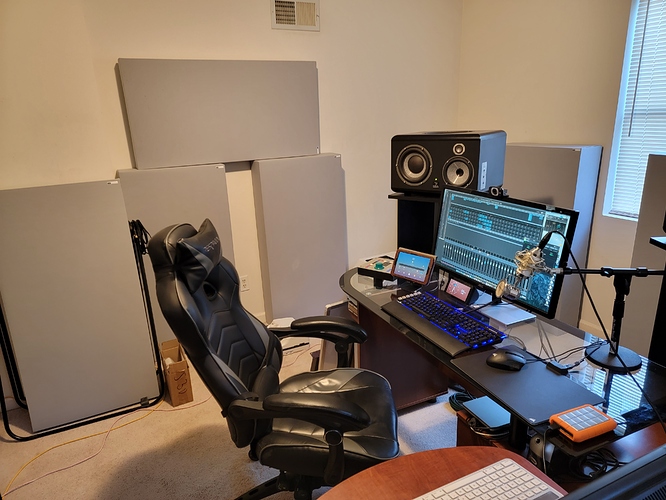 Nice work. It is interesting how few plugins you need in the end.

When I was trying to compete with other mixers in 6/7 years ago for bands and artists in my area, I felt like I needed every little 1% of advantage I could get (and that went for both skills and tools). But for broadcast and voiceover work, less is SO much more

Music artists care about every little deal. Broadcast people are like …‘can we hear it? Great!’ No one’s stressing out about the shape of a bell curve or the amount of compression on a delay tail. It’s really nice to be able to fly through stuff and have no one complain unless something’s really wrong.

Which Waves plugins are you still using?

Sounds like a good setup J, hope it works out well!

Looks like you have a nice, clean set up there, Jonathon. I prefer a really barebones setup for myself. That way there’s less chaos and fussing with gear. Another advantage to a minimalist setup is that you tend to have less choices which means you have an easier time focusing on the music and spend less time testing different pieces of gear to find the perfect fit for your recording. Less equipment can make your more productive.

I’m planning on buying a new recording laptop and I might make a new thread to ask for advice.

That’s my channel strip for a basic podcast/video stream type voiceover. I rarely need to reach for plugins outside of this. The de-reverb and sound restoration tools are all in the Isotope RX chain and print destructively to the source audio, so they’re not showing here. 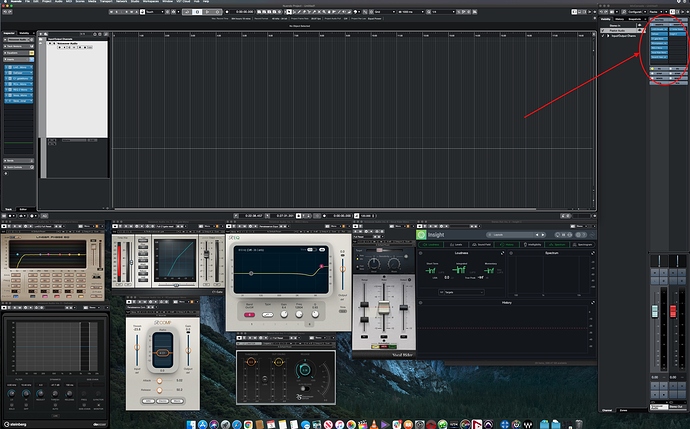 If there’s music going on in the broadcast (which I still do a good bit of), then I have 2 different templates if it’s classical/choral or commerical/pop.

For non-classical, I’m using the CLA compressor suite, SSL channel strips, the Waves realtime autotunes, and a lot of the saturation plugs like the Manny Drive, one knob driver, vitamin, J37, Schoeps strip (just for the drive), Cobolt, and NLS.

Honestly, UAD, Plugin Alliance and Sound Toys made some excellent drive and saturation plugs. Arguably better than Waves, and faster to dial in. But being able to load a versatile and flexible 128 channel broadcast template in under 20 seconds is more important than having access to some of those other plugs. Just having them installed doesn’t seem to affect the system that much, but once they’re inserted all over different channel strips, it starts to bog down the system. It also slows up the offline bounces too, and the ability to re-render truncated audio clips before as you’re prepping it for archive.

Sounds like a good setup J, hope it works out well!

I think those GIK traps were one of the best investments I’ve ever made. Had to go buy a stud-finder to hang them on the walls though. Gotta un-install the ceiling mounted ones in the old building also. So still moving the rest of them in.

I prefer a really barebones setup for myself. That way there’s less chaos and fussing with gear.

I had forgotten how much time I used to spend installing updates and renewing license codes, and fighting with waves central, XLN download manager, Izotope installer, Ilok manager etc… haha.

I guess was in the minority of the people who enjoyed the process of taking the time to understand what each plugin did really really well. I rarely remember feeling blocked by indecisiveness or overwhelmed by too many options. I guess I considered the time testing different pieces of gear time well spent. BUT… for me, in hindsight, it did lead to a tendency to overmix. Making tweaks that personally I could hear, but that were totally incosenquential to the finished product. It led to processing things because I could, not because it was necessary.

I think those GIK traps were one of the best investments I’ve ever made. Had to go buy a stud-finder to hang them on the walls though. Gotta un-install the ceiling mounted ones in the old building also. So still moving the rest of them in.

Oh hell yes, my little basement studio room is fully covered with them (room I bought them for was about 25% larger area). Just did a live-stream show in there this afternoon in fact

I’ve been doing a series of solo one-take vids that you can check out at this link, you can see the GIKs all over the place:

Edit: for some reason the link to my Playlist on YT generates a “this video is unavailable” box, which I don’t understand, I pasted in the link that YT provided when I hit the Share button. J, you can just google up “Dave Draper McMurtry guitar demo” and you’ll find 'em.

I plan on doing similar re plug ins when I get a new rig next year some time.
I have my go to’s for most things now and rarely step outside of them.

Interestingly though, I started listing the plugins I’d keep (not sure if Vsti’s count but I guess they do) and ended up deleting it because it was quite a long list. But I did note that each did their own thing and there was little to no overlap regarding function.
Still, it looked stupid when trying to show how little i needed

Yep. Even if you don’t have a load of plugins, it can be less enticing to learn them than to play and make music. I’ll learn it later… maybe… probably not.

Nice. There’s something magic about the way you’ve managed to completely switch careers so many times and seem to do each one well. In the time I’ve known you, you’ve been a touring musician, mixing engineer, went to law school, and now a game programmer?

Nice. There’s something magic about the way you’ve managed to completely switch careers so many times

Yeah… it’s called having mid-life crisis. You should try it sometime. It’s fun.

I dropped out. And I’m SoooOOOO glad I didn’t attempt to make a career out of that. Sheeesh!

Actually working on building and implementing machine learning systems for SmugMug/flickr. So audio got me into games, games got me into coding, coding got me into enterprise tech.

Haven’t given up on the dreams of having an stupid huge bank account someday, but there’s just no way I was gonna get there through music and audio production.

and seem to do each one well.

Well… I’m certainly no super dev… you might even remember some of the laughable total noob level questions I used to pester you and Christina (and a few others) with 5 years ago when I was just getting started writing code.

I really love it though. Getting to sit at a comfortable desk with cutting edge enterprise tooling that someone else pays for, and then do nothing all day but invent solutions with your mind feels really rewarding.

Looks like you have a nice, clean set up there, Jonathon. I prefer a really barebones setup for myself. That way there’s less chaos and fussing with gear.

Which Waves plugins are you still using?

Haha… I ALMOST made it with just Waves and Izotope. I had to install some of the @bozmillar plugs today. Couldn’t live without Mongoose, and I really missed that little Pan Knob of all plugins!!

I got the ceiling traps uninstalled from the old studio building and moved into the temporary office space. I’m gonna mount them on the walls as soon as my wife gets back to help me (it’s easier to do with 2 people).

They’re pretty thick traps, and have built in diffusors to help limit the amount of midrange absorption. 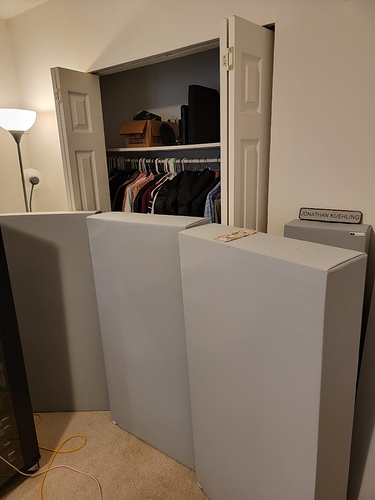 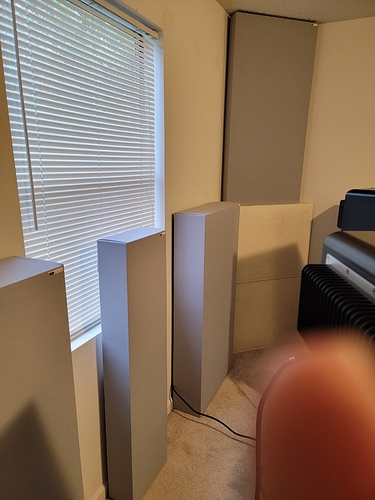 Also, the tech company I work for in California also sent me some old Thunderbolt 2 to Firewire adapters they didn’t have a user for anymore!

I pulled up cutscenes from Halo 5 and left it playing while I was re-wiring. WOW there was a noticeable difference between the Scarlet going analog and the audio simply passing through the MOTU via light pipe. I mostly made the switch that the db metering on the CraneSong’s LED display would match up with the 2bus output in Nuendo. But OMG did that ever improve the sound.

My guess it was a combination of a USB powered RCA jack, two crappy RCA to XLR cables, and the absence of an output gain stage that cleared it up. I also wonder if the fact the Focusrite draws USB power off the computer has something to do with it also. Because I know Focusrite has converter technology that can go head to head with anything on the market. I guess I was just surprised when I heard that much of an audible difference. 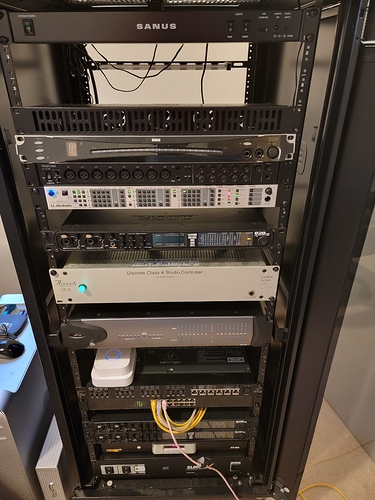 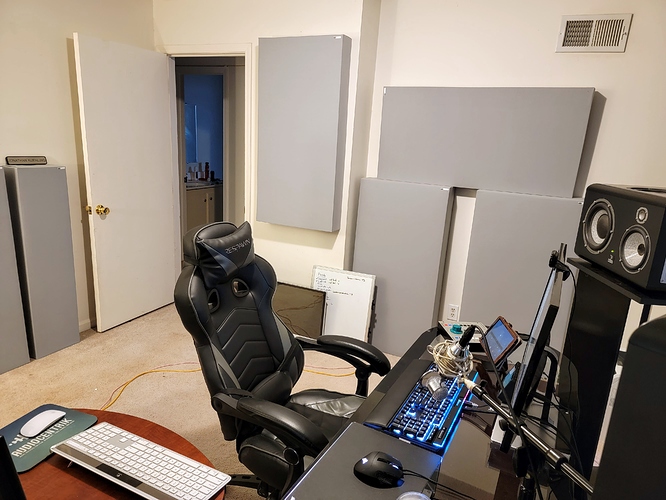 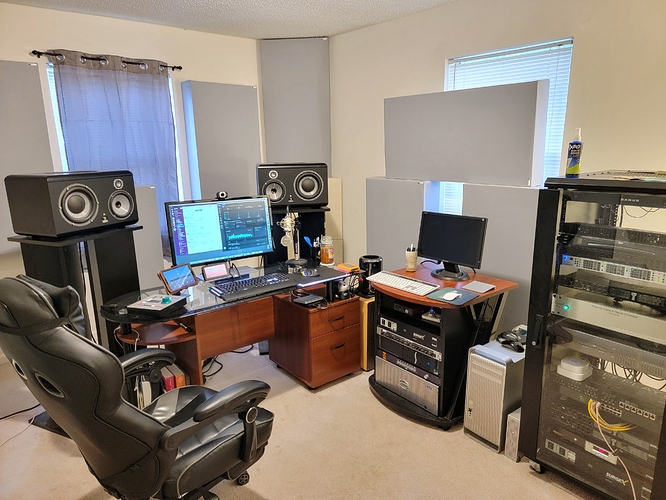 Well i am not handy with electronics, but very good with tools. I wish I lived near you. also one knows how priorities changed with age. It used to be a pretty girl that would get my ticker pumping, but now it is pills and pics like this.

Welp. That was short.

Moving out and starting on what will be my fifth studio sometime in January. Just closed on the sale of my last studio building, and have a new place under contract. Got a big ole 4500 square footer (6 bedroom 5 bath, great location + waterfront) this time. When I closed up shop in 2020 during covid, I got away from music recording, but I decided not to sell any of my stuff. Figured heck… if I’m hanging onto everything, and I have the space, may as well set it all up.

haha…I never really moved into this temporary space I’m in at the moment. My mixer is half in storage and half in the living room as a lol… avant garde piece of modern art??? 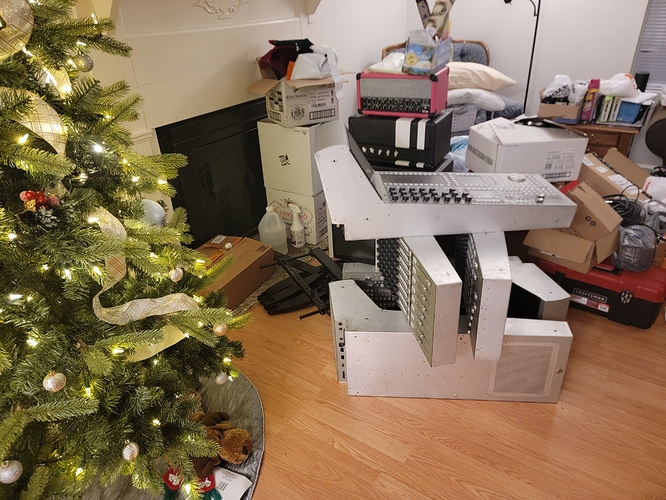