I’m curious about people’s thoughts on mid side processing, whether EQ, compression, or whatever.

There’s a part of me that thinks this could be the next New horizon for me, something that makes sense intuitively, and something I might want to explore. But I’m curious about something…

As I think about it, couldn’t mid-side processing actually cover up other problems in the mix that have to do with balance, competing EQs, etc. I’m just wondering how much the gains that I would realize when I listened in stereo would transfer to a mono mix. It would seem to me that when I listen in mono the problems would be back again.

How much do y’all use mid-side processing. When is it helpful, when should it be avoided. Are my concerns off base?

I’m thinking if I had my instruments EQ’d properly, and had good balance in my instruments, maybe it wouldn’t be necessary? Just wondering.

Ive worked out my drum micing, and guitar cab mic techniques to reduce phase issues to almost zero, as I record live without hearing what I’m doing).

But yes I will use some (but usually only a little) stereo widening… basically the same thing, if it sounds better, so yes… do it. especially if your mics don’t match, maybe you have an LD condenser over the snare (your $500 vocal mic) and a $150 figure 8 ribbon (that you really like on bright guitar amps), looking at the room sideways, jammed up against it in a small but tall room… like a stairwell. That could be a genius scenario…

A thing to remember about M/S is that it ensures mono compatability by totally eliminating the S signal when the mix collapses to mono. Sometimes that’s great, and sometimes it’s not so great. I’ll give an example of not so great;

Mid Side drum overheads. You get a great mono, solid & direct representation of the kit from the M mic. And from the S mic, you get a great big roomy sound. You balance them to sound great in stereo, getting the best of both worlds for a nice big lively roomy drum sound.

Then you do a mono test, and the S-signal entirely disappears so you lose almost all the room ambience on your drums.

Bu contrast, if you went for a normal, L-R signal stereo mic technique, when your mix collapses to mono you can still hear both signals. You get resulting potential comb filtering/phase issues, sure, but you can still hear everything.

And then you just need to decide what you prefer to happen when your mix collapses to mono.

A thing to remember about M/S is that it ensures mono compatability by totally eliminating the S signal when the mix collapses to mono.

Really? I did not know that. but you’re saying that that would only be for when I had literally click into mono mode, say, for monitoring my mix, right?

Ugh. I just re-read your post, Josh. You already answered my question. Sorry about that!

I tend to avoid, except on my mix bus. I use bx_digital v3 to collapse everything below 120-150hz to mono, and sometimes I’ll do some light EQ. For example, if I wanted to generally boost the low end, I’ll put a bump in the M channel, and if I want some more “sparkle” to the wide elements I’ll put a boost on the S. Doesn’t happen all that often though.

M/S can pretty easily wreck a mix, so always use with some degree of caution and reason. Definitely something that’s fun to experiment with though… I’m going to try out some of the suggestions above and see if they work for me.

What plugins do you guys use for mid side? Do you use more mid side EQ, compression, or both? How about saturation?

Ahh yes, I actually forgot that I usually cheat on the decode part, I mic it correctly, then just use it as a cancellation / widening, balancing act technique in mix after that…

Just typical of where Im at…

Ugh. I just re-read your post, Josh. You already answered my question. Sorry about that!

If I had a doller for every time I had to re-read something, I’d have to convert them into pounds because shops don’t accept dollars here.

What plugins do you guys use for mid side?

When I use it, it tends to be IK plugins as I use them anyway and they have a handy stereo/midside/left/right/linked/unlinked matrix on many of their plugins. Probably most often it’s M/S eq on the master bus using the 432 to get a bit more sparkle at the sides and a bit more punch in the middle. Very occasionally it’s a compressor, either ssl style or their vari-mu, to just tickle the snare transient a bit without pumping the sides.

I’d have to convert them into pounds because shops don’t accept dollars here.

I guess they don’t accept Euro’s anymore either?

I am a big fan of M/S. I go the hardware route, using a Avenson Mid-Side R unit. I find that once you get really close to a final mix, just before any stereo mastering, a M/S processor can really help to find sources that need eq and compression that would not be found by just stereo processing alone.
I would disagree that mid by itself determines what we hear in mono.Once a stereo output is switched to mono, both the Right and Left components are collapsed and that is the entire stereo field. If you are checking mono in the stereo mix, the “side” values are whatever the right and left channels are contributing to the “side” signal. Same goes for the “mid” channel. But unless you are not returning the mix into the stereo counterparts, none of the information is lost (with the exception of signals that cancel out due to phase when in mono).
Back to the topic…
I hang an eq and compressor on the M and S bus and eq or compress as needed. Once done, I process back to the stereo L/R pair for final tweeks. It to me is a very powerful way to remove/enhance/restore a 2 bus mix. Big fan…!

Thanks for this, Kent. So, could you clarify what you mean by this? Is that to say you’ll set up a separate bus to which you’ll add an EQ and compessor that does M/S? It almost sounds like it’s kind of a parallel buss dedicated to M/S? I am probably way off?

I would disagree that mid by itself determines what we hear in mono.

In tradition L/R stereo, you’re absolutely right - when you collapse a signal to mono, you get the sum of the left and right channels so you still hear what’s being done to the stereo extremes.

But Mid/Side processing is something different. The resulting decoding matrix is sending the Side signal to the left and right channels, out of phase with itself in one of the channels. So the side signal of an M/S process only exists in terms of how it modulates the mid signal. And if you collapse the Left + Right output of an M/S process to mono, you’re summing the two out of phase Side signals together - they totally cancel out - which is clear if you look at this example of the M/S decoding matrix on a mixer. 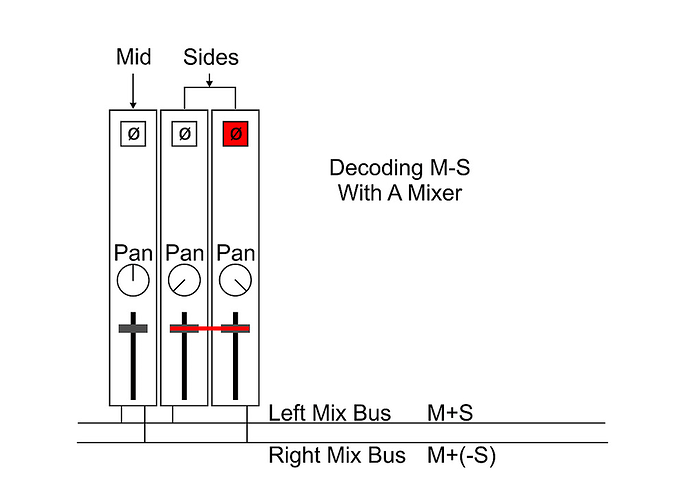 Of course, there’s every chance that processors aren’t quite doing mid/ side in a textbook way. But in principle, anything you do exclusively to the side signal would cancel out totally when collapsed to mono because the side signal is out of phase with itself, and only makes sense as left/right stereo while they’re separate and the side signal is able to modulate the M signal present on both sides.

To the technical stuff,

The mid channel is identical to the mono mixdown. If you do any processing on the side channel, it won’t have any affect on the mono mix.

As to the original question, I also tend to use mid/side stuff only on the master output or buses. I tend to use it in broad strokes as an EQ. For example, if I’m going to boost the high end of a mix, I would start by boosting just the sides to see if that will do it.

Or if I’m going to scoop out the low mids, sometimes I’ll try doing it just on the sides, just to get rid of some mud, but not make the whole thing sound scooped.

Hmmm. Let’s say I have a kick drum panned to center and a guitar panned hard left. Once in the M/S domain the kick would be in the Mid channel and Guitar in the Side
channel. So far so good. Now if I hit the mono button, it will depend on whether that mono signal is derived from the M/S processing or post processing.I think I assumed you were talking about post processing because otherwise you don’t really have a meaningful signal. I guess that is your point… maybe I need a reading comprehension course more than new gear!

Anyway, my M/S set up is L/R into the Avenson which outputs the Mid and Side signals, Then they go to an A Design Nail compressor and Manley Massive Passive. The left channel of each processor is designated as the Mid processing bus and the Right channel is designated as Side processing bus. I use a patch bay to either process eq>comp or comp>eq, mix dependent. Once completed I come back into the Avenson which outputs a L/R stereo signal for final processing The two bus (currently a RJR Magic Buss processor). In this way I have a separate Mid bus and Side bus to process each separately.

Hmmm. Let’s say I have a kick drum panned to center and a guitar panned hard left. Once in the M/S domain the kick would be in the Mid channel and Guitar in the Side
channel.