This plugin has me stumped. Anyone else use UAD stuff?

Neve 88RS channel strip. I saw Andrew use this on Terry’s track earlier. As much as I love the UAD stuff, I’ve been having a difficult time figuring out what this thing does differently or better than any other channel strip. The EQ seems to have some unique bell curves but there’s got to be more to this channel strip than that. But I’m just missing it. I get why the API vision strip and the SSL E are so loved by the UAD community. Would someone please tell me what’s so special about this thing? The console drive is nowhere near as sweet as the 1073. The gate is clunky and hard to dial in, the side chain EQ is useless. Is this whole thing really about the filters and the EQ? 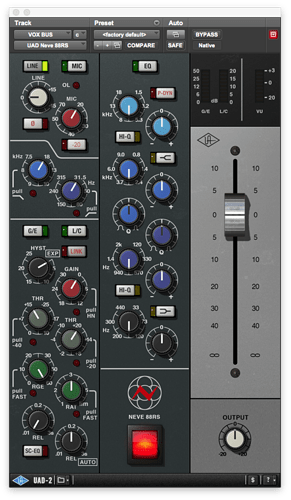 For some reason, I never seem to find myself using channel strips. I can see the benefit, but I’ve never come across one that didn’t feel clunky to me and the GUI’s all feel like there is too much going on to even concentrate. I think the last part has to do with my ADD though

I think the biggest benefit is the noise and character of the circuit that was modeled. The problem with the Neve RS is that I’m having a hard time finding an application for that specific type of character of channel strip. The level of clean and clear on a real Neve 88R or 88D channel strip is unprecedented. Its by far the most detailed, transparent, non colored console ever made. My question to UAD was then what’s really the difference between running strait into your converter? Why run a signal super clean then put a super clean channel strip on top of that? All of the other UAD strips (API, SSL, Helios, Manley and UAD 610) are very good at dirtying things up. This one doesn’t quite do the same and I suspect that’s because that isn’t its purpose. Then what is?? Normally these get used for orchestral tracking. So is this channel strip plugin mainly used for its Unison features?

I’ll give it a shot if someone can explain how to do it. I know there were a bunch of these RTA test things that @bozmillar said on an earlier thread were completely worthless. It was the one with the UAD SSL. That it showed some stuff, but what it showed was all the wrong data to draw any meaningful conclusion.

If anyone already knows how to do this and has an Apollo or a UAD card, I’d love to see some stats on this particular plugin. There are two Neve 88RS’s. One is v2 the other is legacy. There were some major changes according to UAD.

Is this whole thing really about the filters and the EQ?

I would guess that the whole thing is about sounding like the original.

I don’t hold the same reverence for analog gear that some people do. Of the gear I’ve tested, some are interesting, some are downright clunky, even if they are expensive.

I don’t hold the same reverence for analog gear that some people do.

Neither do I. I don’t hold reverence for anything that slows you up, breaks on a regular basis, and pounds you with workflow inconveniences almost as hard as it pounds your bank account.

What I was trying to figure out was how people are using the plugin and what they’re doing with it. Sometimes you can gain insight into the potential of a plugin based on what you know it was used for in the analog world. But in the case of the Neve 88r, it doesn’t even make sense to have modeled this thing. I just don’t get it. If it was all about the EQ, then why not just clone the EQ?

I just can’t wrap my head around UAD modeling something completely worthless simply to sell it. But you have to admit this plugin is not very popular. And there’s very little literature and few demo videos of it out there. I don’t know if that’s because the real console is so expensive no one could afford it, or if its simply that people don’t like the Neve 88R that much in real life.

I love the Eventide strip.The gate is fantastic on that i find

that isn’t its purpose. Then what is??

there is this new thing they just came out with…marketing

I wouldn’t read much into me using it - I’ve been using it for years and it does what I want it to do.

I’ve realised from some of the exchanges here that most people are far more analytical about mixing and its tools than I am. If something works for me, I use it; if it doesn’t, I move on. One man’s meat is another’s poison etc…