This is one of the most bizarre music production websites I've ever seen :\

While making my rounds to see what other recording studio forums and home recording forums are up to these days, I stumbled across this rather obtuse looking website that (for the music recording industry) may as well have been written in ancient Hebrew. Does anyone have any idea why someone would write articles like these? Or who on earth they think is going to read them? I had to look at it closer to figure out if had anything to do with recording and music at all! 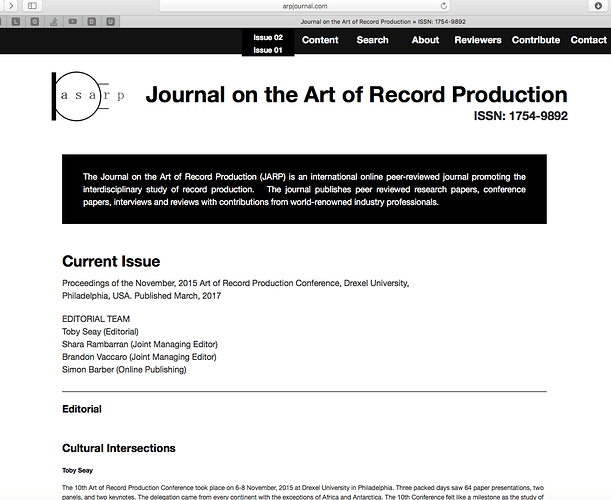 Don’t spend too much time thinking about this, but here’s a sample of one of their journal articles:

The Analysis Of Recorded Space In Popular Music Studies

Popular music analysis has developed concepts that consider recordings in terms of spatial staging, phonographic staging, the soundbox, and virtual space. These are methods or interpretative strategies that analyse the recording as a kind of space. They are valuable tools in considering technical aspects of recordings and giving hermeneutical interpretations of music (the founding figures of the field are William Moylan and Allan Moore whose concepts are summarised in Moylan: 2015, and Moore: 2012a; other influential contributions are Lacasse: 2000, Zagorski-Thomas: 2014, and Zak: 2001; see also Katz: 2010, Lacasse: 2010, Middleton: 2000, Moore & Dockwray: 2008, Moore, Schmidt, & Dockwray: 2011, Moore: 2010, and Tagg: 2012). The theoretical underpinnings are a more recent addition in the literature, and are usually found in cognitive philosophy’s theories of ecological perception and embodied cognition (the main references are Johnson: 1987 from whom the concept of image schemata is borrowed, and Fauconnier & Turner: 2005; the main appropriations of such theories in musicology are Zbikowski: 2002, and Clarke: 2005; it should also be mentioned that these theories have found use in the analysis of audio in computer games, see Garner & Grimshaw 2014) as well as the concept of proxemics (from Hall: 1966).

Zagorski-Thomas’ and Moore’s reference of cognitive philosophy, as well as Moylan’s and others’ development of a methodology for analysing space in recorded music, points to an ongoing commitment to this project of music analysis in popular music studies. This empirical grounding and methodological rigour can only be commended. The scope of this article does not provide space for critique of the concepts of space in the field as it has evolved during the past decades. However, the methodological strength of the literature needs to be further complemented by an ontological and epistemological grounding of the listening subject and of the social status and production of space. I will follow Zagorski-Thomas, who points out that this is one of the current challenges in music studies:

Despite the fact that the academic study of music has really developed in tandem with the development of recording and recorded music, it hasn’t sufficiently addressed the ontological question of how recording changed music and how that change needs to be incorporated into its study. (Zagorski-Thomas: 2014, p. 1)

To my mind, this is also an epistemological question of listening. The theoretical foundations that writers like Zagorski-Thomas and Moore find in cognitive theory do not exclude questions of the ontology of recording or the epistemology of listening. However, the analytical models this literature provides are not always easily combined with a more cultural and social understanding of space. Furthermore, the preference for visual metaphors, a grounding in bodily experience, and a vocabulary like ‘environment’, ‘imaging’, ‘staging’, and ‘mapping’ suggests that it might also be fruitful to consider some of the issues of visuality, geography, and space that rarely have been discussed in relation to space in recorded music, but are so central to the literature of the spatial turn.