…when all hell broke loose. In my entire career I have NEVER missed a call time for a gig. I was in place behind the piano with less than a minute to spare. But MAN was this a shit show here. I feel terrible that this stuff happens…even here in Florence. There were a few other performers that were visibly shaken. I missed the entire sound check, and my monitors were a wreck, and even worse, as I was playing the first set, my mind kept wandering hoping it wasn’t someone I knew who got shot. Pretty rough gig tonight. 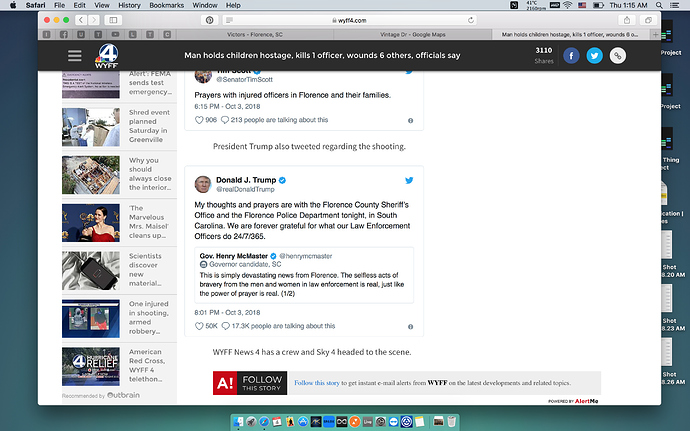 I immediately thought of you when I heard this news J… very glad you are OK. Yet another mass shooting… the “new normal”.

Damn. I heard there’d been a shooting but didn’t hear where. Hope no one you know was involved.

Yet another mass shooting…

One per day on average.

There was one here near my town this morning too. I don’t know the outcome yet, but it seems to still be contagiuous

it seems to still be contagiuous

They do tend to spawn copycats.

One per day on average.

I guess that would make them all copycats.

Before my a.m. session started, I made some calls to find out if anyone I know got hurt here. Luckily no one I know was hospitalized, but in a town this size, this effects EVERYONE. Everyone I know is within one relationship away from being connected to the officers who were placed in harms way here. Weather it be through a local church, a longtime friendship, a professional capacity, or a circle of common interest.

A very good friend of mine was at this scene early and had his car shot up. One officer had her knee blown out, another is paralyzed, one had internal injuries to his colon and hasn’t been released from the hospital yet. I haven’t heard anything about the other 3.

Wow, that’s just nuts. Godspeed to healing for all individuals and the community.