This compressor is SOOOOOOO fast... are these numbers even right?

The release times, I get it. Anyone can hear a 0.3 vs 0.8 release. That’s like… duhhhh. I wonder what the reasoning was behind creating different attack times on the FC. 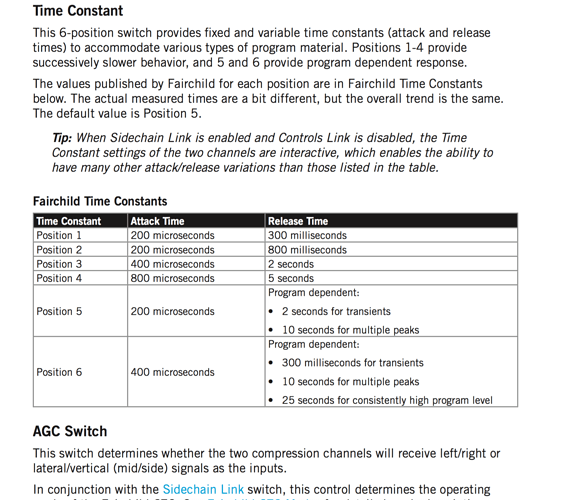 I found this info that explains the purpose of designing a compressor/limiter with such fast attack times:

From the linked article: “The essence of the Fairchild 660/670 is very fast attack and slow release times. The fast attack was necessary in its role as a broadcast limiter, protecting the transmission tower from explosive transients that could burn up a transformer. This character was also well suited for mastering mono records. But the expansion into two channels is where the unit really shines. While the 660 had been designed primarily for broadcast, the 670 was intended for cutting stereo lacquer masters.”

Yes, it’ll be right. As JayGee said, they need to be able to catch fast transients. Even at 200 microseconds, that’d still take a full cycle of 5kHz before reaching max gain reduction.

With vari-mu compressors, you have a very soft knee, so the ratio rises gradually as the signal passes over the threshold, and that softens out the attack characteristic a bit. Then there’s the other parts of the circuit - transformers and valve circuits can be a bit weightier sounding (citation needed, I know, but you know what I’m talking about I’m sure!). So even with very fast attack times, you might still get the impression of a more punchy sound even with the transients being stepped on.

I’ve never got close to a real one but I like the IK 670 model on vocals, because that fast attack time handles plosives and sibillance quite well. And that version at least also tucks the low mids in a little bit and adds a nice sheen to the highs, which I guess is just some gentle harmonic distortion. It’s also nice on drum bus - just get the GR meters twitching 1dB or so on the snare hits and it gives you a little more headroom to push the body of the drum tone up in the mix without feeling like you’ve lost any transient snap or punch.

While the 660 had been designed primarily for broadcast, the 670 was intended for cutting stereo lacquer masters.

Didn’t know that! Thanks for the link. Great info

I’ve never got close to a real one but I like the IK 670 model on vocals, because that fast attack time handles plosives and sibillance quite well.

I used a real 670 the last time I was in a major tracking studio. I tagged along to the session as the mix engineer. Vocal signal chain was M149 -> BAE 1073 -> FC. Actually, it was an UnFairChild which is a $10,000 clone made by company called undertone, but it sounded Sooooooooo good that I can’t imagine how a $30,000k original model would have sounded much better

One other question I have is how much electronic precision can someone achieve when a unit is unit is hand built with 20 tubes and 14 transformers? It seems the accuracy of a .0002 .0004 .0008 second attack would be very difficult to achieve. I honestly can’t hear this in the plugin.

New thread on how I tested it.

Nothing technically to add here, but this is a timely post because I just picked up the IK-670 (https://www.ikmultimedia.com/products/trvintubcomplim/?pkey=t-racks-single-vintage-compressor-model-670) during the recent group buy and am loving it. I also don’t have the Waves version for some reason, but it has been on my list for a while now. Then I jumped on the IK Group Buy, and as soon as I demoed this one, I grabbed it. I loved the smooth and creamy sheen it added when I tried it out.

And thanks @Cirrus for some other ways to try this out. I haven’t been this psyched about a plugin compressor since Boz’s Manic or Plugin Alliance’s VSC-2.

Oh, and good article @JayGee - thanks!

And I’m sure they had scopes in those days, so they’d be able to test performance by seeing how the fast attack time distorted a test tone, or something like that.

And I’m sure they had scopes in those days, so they’d be able to test performance by seeing how the fast attack time distorted a test tone, or something like that.

Yes, these were not massed produced and could easily be tweaked during testing to tighten specs.
.