With some increased involvement in sound design, I’m in pretty dire need of advanced saturation tools. I didn’t realize how many Plugin Alliance had.

So their pick 10 has a $29/mo commitment over 29 months on a lease-to-own. $841 over the course if 3 years and 5 months with no early buy out option. If your payments lapse for more than 20 days, you loose your money and start over. You can not upgrade or exchange plugins once you have committed. But you can opt out early without owing money. I wish you could pay this out, because if my card expires or I loose it it’s inconvenient, but I’ll easily make the $841 back in 2 days worth of work.

This reduces the value to $84.10 per plugin, with a $3150 bundle. I have the PA total v 1.2 bundle, but it lacks 10 of the saturation plugins and augmented/virtual reality plugins I need the most.

How are your experiences with customer support? They’re already a step down from Waves and UAD in that you can not call them. In the nine years since I’ve owned the majority of their plugins, I’ve never actually had to deal with them. Thoughts?

I was going to say, just email them and ask if you can pay up front. I can’t imagine them saying “no”.

Also, in my experience, customer support has been great.

So I’ve done a shit ton of digging and even joined the PA Facebook group forum to get clarification. It doesn’t look like they allow this. Do you still think there’s a chance they’ll take it? 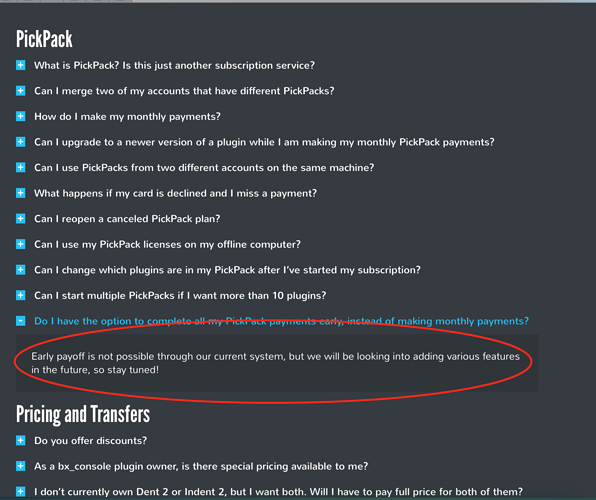 And the Monthly vouchers was a huge deal to me. I really like how you can apply them toward any plugin and toward sale prices of plugins in their entirety. Unlike how Waves limits the voucher to where you can only apply 40% of the total to a single plugin and 25% to a bundle. Or with UAD, you will never receives a voucher that exceeds the price of the sale item. 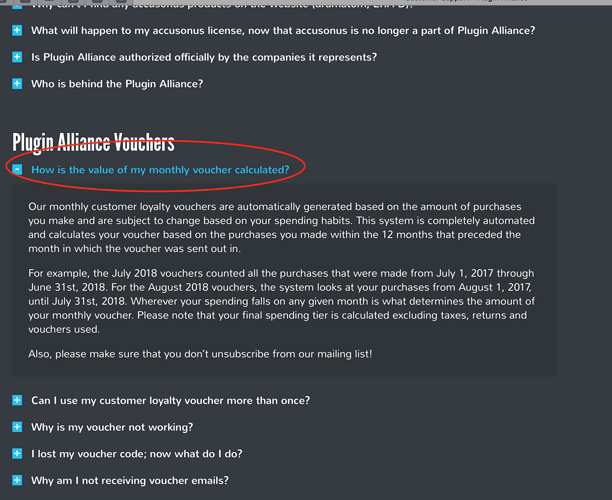 Also, I found that PA plugs are nowhere near as expensive as they appear. The Noveltech sold for $9 last Black Friday. The Vertigo 3 was $59 once. I’m thinking about snatching the Console N then renting the pick pack (since I need it as soon as the demo licenses expire), snagging the sales, then cancelling the pick pack.

I have never looked into actually buying a Pick-Pack, so you know more about it than me. But I can’t for the life of me imagine a scenario where, as a company, I wouldn’t want my $$ NOW rather than over a 2-year period. It can’ hurt to ask, and at least that will put the early pay-off issue on their radar if for some unfathomable reason they say “no”.

On another note - I can’t believe that I am actually about to recommend something to you - but here goes. PA has 2 of my very favorite plugins.

My go-to bus compressor, the VC-2:

The classic tone of the best VCA compressors from the 70s and 80s with a modern, mastering quality signal path.

The SPL De-Esser - my hands-down favorite De-Esser / de-harsher (ingenious idea and super easy to use!):

SPL De-Esser Collection. Vintage & Modern. De-Essers remove undesired sibilant frequencies precisely without compromising the timbre and character of your vocals. These are the most musically sounding De-Essers!

Both sound fantastic and the workflow on both of these is second to none. In literally a couple of seconds you’ll know whether or not it will work.