Do you guys use channel strip emulators? Just started playing around with them a little more. 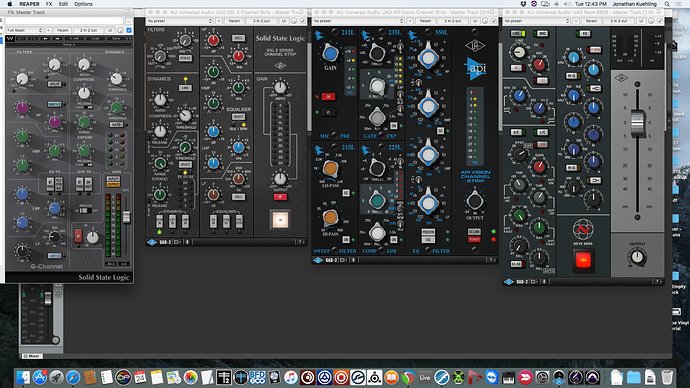 …I hope the compressors on the 88R strips sound better in real life. Those things were BORING!!

To answer you, yes. I almost-explusively use the Slate VMR. I used to use the Waves API strip, but I’ve adopted an all-in-all mindset with the VMR now.

I’ve lost count of how many times I’ve tried them. I WANT to like them, but I just always end up reverting back to specific tools that I’m used to. I suppose it’s a bit like working with other DAWs. Some DAWs have cooler features than others, but at the end of the day, it’s all about workflow.

Strangely though, I HAVE been finding myself using Slate’s virtual mix rack a lot more now and in reality, it’s essentially the same thing as a fancy channel strip. lol

I use channel strips more because I WANT TO. I’m used to it and I know what to expect. My go to is the waves ssl and sometimes I dupe the track and use the API. But I use the SSL, API and Neve throughout the mix. But again, it’s because I want color and I kinda know where I’m going with them.
I know I can get just as good results otherwise… even with stock plugs. But what fun would that be…

I almost-explusively use the Slate VMR.

I hope he finishes his beta on that EL8 distressor soon. Its one of the few pieces of hardware I can’t find any plug to replace. Absolutely love the hardware version. Probably one of the most usable sub $1000 units around. (used of course)

I regularly use the IK sale British channel, but I have to admit I don’t like the dynamics section very much - only use it for the eq, which I think works well on drums.

Absolutely, I loved working with the Distressor hardware and would eventually like to have a pair myself. Though, if Slate comes anywhere close to being able to emulate the hardware to a degree, I’ll be more than happy to fork cash over for it. Everyone is hounding Slate to have it finished already, but he’s a bit of a perfectionist when it comes to the software. I have no doubt no him and Fabrice are making sure that all the subleties are there before releasing.

the one on the far left has really good graphics.

ive never used the real ones so?hmm? channel strips I have the Boz+10db, it sounds good and has some great functions worth checking out and its pretty cheap…its real cheap compared to hardware.

JK…why do you need Channel Strips with that Star Trek sized console you bought? What was that a SONY from CBS tv station or something… that was a beauty.

JK…why do you need Channel Strips with that Star Trek sized console you bought?

The channel strips on the physical console do 3 things on this board. A single channel strip can access three different ‘layers’ of control.
1 - It can control analog hardware components - actual mic pres and eq’s that are part of the system. So there is an Avid analog EQ attached to channel one. Then channel 1 commands the Freq/Q/boost of that analog EQ.
2 - It can control digital processors on each channel- so it has its own DSP…digital compression, digital EQ, and digital dynamics that exist completely separate from the analog side.
3 - It can control everything inside the DAW. So if you don’t want to use the analog dynamics, or the onboard digital dynamics, you can tell the channels strip to control the compressor on DAW track 1. You have access to each dynamics parameter in your DAW and any 3rd party plugin.

What was that a SONY from CBS tv station or something… that was a beauty.

It was from NBC. It was one of the 3 consoles in the Jay Leno studio. They didn’t need it anymore for obvious reasons lol.

The brain…the core computer that runs the rack units and mixer surface was from Todd AO. Largest cinematic media studio in the world - went chapter 11, government seized their assets, auctioned them off. And they didn’t bother wiping the hard drive. I have the session files from Divergent, Thor, Prometheus, Metallica 3D, Cowboys and Aliens…quite amusing.