This article is in response to Podcast #63 from The Six Figure Home Studio channel.

The premise:
In this podcast, the hosts of this channel predicted the industry may shift to a subscription-based recording studio services model where bands might pay $1200 pr month for a song to be recorded live, then quickly published to the viral media outlets on a regular basis to be monetized.

Why this works for me, but not for other recording studios:
For 8 years, the bulk of my studio income has been based on a subscription model (or a service contract retainer as I call it). But not for recording independent music. If applied to the music business, I predict there will be major deal killers that will prevent this model from materializing. The premise assumes that a professional engineer is required to uphold a quality standard sufficient to keep the artists fan base engaged. I’ll spend the majority of this article explaining why I do not believe this is to be the case.

My subscription model is close to that of a law firm or an IT firm company. I take freelance jobs in addition to my service contracts, but am not directly employed by any of my contractors. The benefit is that the companies have a go-to person which is familiar with their workflow and prevents them from having to bill on an irregular per hour basis. The smallest client I work with on a subscription model has a $3.3 million pr year revenue stream. They are a local independent entity, big enough to need my services, but too small to establish their own audio production facilities. I bill them for any hours that exceed the scope of the base contract.

Relevance of the service:
I want to address a few points that may have been overlooked. It was mentioned that bands are bad at saving money and the subscription remedies this by providing a pay-as-you-go arrangement opposed to a lump sum payment. This first issue is that bands capable of shelling out a $1200 pr month for a quick 3 hour live session will be hiring you on the basis of convenience, not quality. If the logic is that viral videos that are only intended to keep an audience engaged do not have to be that good, then it begs the question of why its worth $1200 pr month to have a professional mix it at all? The value of the services is not relative to the market standard of audio. Its relative to the specific needs of the entity paying for it. In this case, its overkill.

Skill set obstacles for the studios:
It was suggested in the podcast that the studios equip themselves with low-level video capturing equipment, as current technology provides considerable value pr dollar. And its not hard to sync a mixed audio track to a video edit. My argument is that this still exceeds the scope of what many audio engineers without videography backgrounds have any desire to tackle, if they’re tasked with the video editing and file management challenges as well.

This is not a music service:
Another matter I’ll raise is that this is new. Consider that Leno, Conan, Kimmel, Letterman etc… have been doing this for decades. Not with the same objective, but very similar in process. Record live, shoot the video, edit, mix, broadcast. But seeing as how they were able to get hundreds of bands on their platform, you would think a possible solution would be for audio professionals to keep an eye out for broadcast entertainment firms that beginning offer regularly produced media services in partnership with multiple music clients. Problem again: These firms are not an audio centric service in my opinion. To me its very clearly a media production service.

Relationships with bands may not help:
In podcast mentioned that audio engineers should help bands begin to transition to this platform. And that it would be prudent to utilize the connections with bands that audio engineers already have established. Something that may have been overlooked is that media production companies hire the audio specialists, not the other way around. If this model were to materialize, you would likely not be approaching the bands directly. You will be approaching the production management personnel of that company. Its debatable if the connections would be of much value. A studio engineer attempting to solicit a media production service based to a band based primarily on the audio component would arguably be mislabeling the service.

I’m grateful for the opportunity to be a part of the amazing entrepreneurs in the Six Figure Home Studio community. I’ve learned a lot of valuable information and met some truly wonderful people. I look forward to hearing your thoughts on this either on the IRD forum or the SFHS community page!!

I’m curious to see input on this as well!

This article is in response to Podcast #63 from The Six Figure Home Studio channel.

I’m grateful for the opportunity to be a part of the amazing entrepreneurs in the Six Figure Home Studio community. I’ve learned a lot of valuable information and met some truly wonderful people. I look forward to hearing your thoughts on this either on the IRD forum or the SFHS community page!!

So did you join that community? That’s what it sounds like. And you took a response to the podcast you posted on their forum/channel (?) and posted it here too? Just trying to understand what’s going on.

I remember that video you posted from that guy and I did enjoy it. I haven’t looked further into what he’s doing though.

So did you join that community? That’s what it sounds like. And you took a response to the podcast you posted on their forum/channel (?) and posted it here too? Just trying to understand what’s going on.

Yup. Its been an amazing community to join up with! A bunch of studio entrepreneurs like myself that nerd out all day over business matters

Some highly respected and well credentialed engineers in there too!

The two hosts publish a weekly podcast that is thoughtful advice on how to help studio owners grow their company from a home studio to a competitive business. Some are just taking their very first steps, others are experienced engineers trying to ramp up their bottom lines. Others are existing studios who are struggling with their client base.

I remember that video you posted from that guy and I did enjoy it. I haven’t looked further into what he’s doing though.

Gear talk is banned in this group. Its strictly business matters (and some joking around). Its hosted on a Facebook platform.

Its been an amazing community to join up with!

So I see an “Academy”, but I don’t see a membership/subscription area. There’s this:

But all I see is a login button (so you can set up a free account?), and some paid courses and some free courses. Do you mind explaining a bit more how that works?

Yup. Once you sign up you can buy any of these: 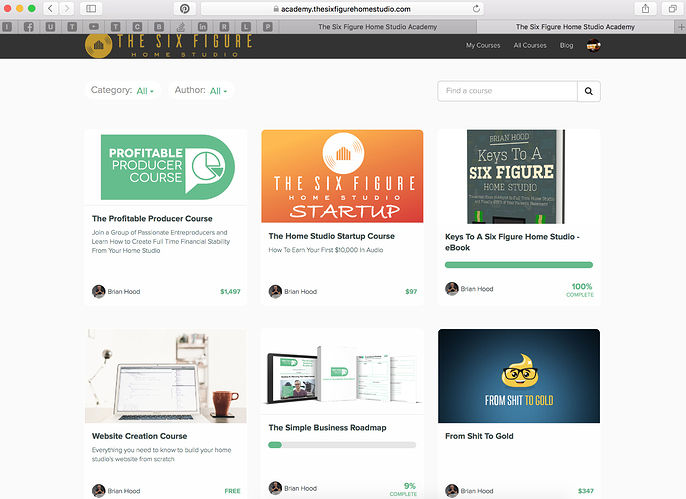 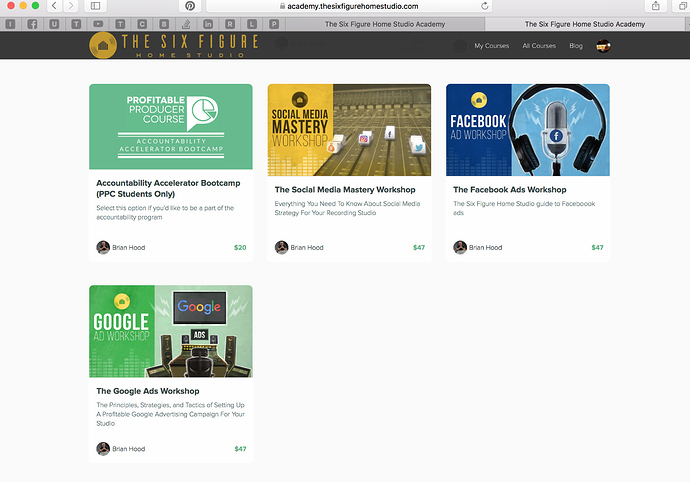 But there are a lot of people on Facebook that haven’t bought any of the materials. However, the group is a pretty good size, with many entrepreneurs that are serious about building their companies. And the information on the weekly podcasts is great stuff that deals with everything from marketing, to addressing common problems, to maximizing workflow and time management.

I posted a link to this article on their Facebook, and it seems some people from the site have looked at it. I can see in the IRD analytics that people are reading it.