I was watching this and really loved the outcome.
I have a question though.
At around 5:20 he says he duplicates the track and sends the duplicate to the reverb.
Why can’t I just send the original track at a reverb and play with the predelay of the reverb?
Isn’t that the same?
I use Cubase 10 if that makes any difference. 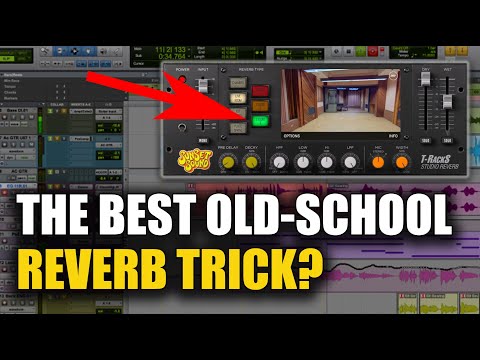 he probably wanted a quick 2/3 dry 1/3 wet ratio, which is quite common in setting up reverbs. By doubling up on the dry kick he essentually has a 200% dry and a 100% wet signal which is the same as 2/3rd dry 1/3rd wet with a fatter result. Other than that there really isnt any difference in sending the original track to a send Fx in cubase and tweaking it to the ratio you want then mess around with the predelay. Theoretically no difference in duplicating or not duplicating the track.

Why was I under the impression that send effects like reverbs & delays should always be at 100% wet?
This is what every video I’ve ever seen on the subject, says…
But I could never achieve the desired 3D effect (depth in the mix) that way. I had better luck using a reverb as an insert and there play with the dry/wet ratio.

There are no rules. You can put reverb direct on the track you just don’t have the same control over it if you want to eq or compress it or send out to a delay or whatever .Far better on a aux bus really

Why was I under the impression that send effects like reverbs & delays should always be at 100% wet?

depends on the plugin. Some older plugins on older computers had latencies that caused phase issue if you coupled two dry signals out of phase. In newer faster computers/plugins its not that big a deal.
If your send FX signal isnt 100% wet its hard to predict what the plugin will do to the dry signal as a send effect. Either way you are controlling the dry vs wet signal ratios, might as well preserve the purity of your dry signal as much as possible by keeping your send channel 100% wet.

Nothing wrong with reverbs on inserts if its a good clean reverb.

At around 5:20 he says he duplicates the track and sends the duplicate to the reverb.
Why can’t I just send the original track at a reverb and play with the predelay of the reverb?

What he is duplicating is the drum bus, there is no audio on this track, it is just a bus that receives all the individual drum tracks.

Why was I under the impression that send effects like reverbs & delays should always be at 100% wet?

There is no hard and fast rule, but it certainly makes more sense to set the plugin to 100% wet if you’ve bothered to create an auxiliary track in the first place, otherwise it is just like inserting the plugin on the original track.

I got it now.
He creates a buss (or a group channel in Cubase) for each source he wants to send to that reverb and then sets that buss’s output to the reverb and inserts a delay plugin to control the predelay.
Finally, he sends the original source to the created buss.
Had to try and do it myself to get it…

What difference is that to a bus with a reverb with preday built in ?

Yeah, I remember seeing this video. It frankly surprised me that no one had described this technique on the “proper” channels before, because I’ve been doing something like this for years, and I posted about it many years ago in this post:

Case Study of the Writing, Production, Recording and Mixing process of a home studio production: "Mean Girl" The Producer's Chair

Part 6 - Guitars Guitars were probably the easiest part of this mix for me - for 2 reasons: Bob is an awesome guitarist, and since 90% of the guitarist’s tone is in his fingers, Bob’s playing and tone are brilliant Bob knows how to record excellent guitar tones. It was simply a matter of me getting out of the way and not messing it up. Having said that, as a guitarist of 41 years myself (many of which I spent being totally tone-obsessed), I have fairly firm ideas about how guitars should sound, and I think it helps that Bob and I are relatively on the same page in that regard. Incidental…

The difference is, I not only use pre-delay to differentiate the “virtual position” of the instruments in the “room”, but I also create different amounts of low and high pass to change the feeling of the way the source interacts with the “room”.

I worked this out on my own, simply by listening and paying attention to the way the reflection from sources in a room varies according to their distance from the boundary (wall). In the post, I describe it this way:

You might have also noticed some very subtle ambience on the solo’d rhythm guitar track. This is actually the same “room” ambience I described earlier on the drums. However, rather than send the guitars directly to the room verb, what I like to do to ever so slightly intensify the sense of depth and front to back image in the soundstage is to send my guitar reverb sends to a “guitar room” track. This track has just has Reaper’s stock “ReaDelay” plugin on it, set fully wet, no repeats, with a delay time of about 40ms. This then runs into my “room verb”. Why?

What I noticed when setting up reverb plugins is that perhaps the most powerful control on a reverb is pre-delay. Predelay delays the onset of reverb and separates it from the source sound. Psycho-acoustically, it brings the source sound “closer” to the listener, and “further” away from the boundary surface of the imaginary “room” being suggested by the reverb. Since sound travels at roughly 1 foot per millisecond, it’s easy to imagine a room with the band set up, the drummer at the back, closest to the rear wall, with the keys and background singers just forward of the drummer, perhaps the guitars in front of the keys, and our lead singer right out front…

So this is how I set up my “room”. The “room verb” that all the other “rooms” feed into has no predelay. I have a “keys room” with a predelay of 30ms, “guitar room” at 40ms and a “vocal room” of about 65ms. This is, of course, by no means scientific, just an efficient way to create extra depth while keeping everything in the same “space”, without using a ton of different reverbs.

With the rhythm guitars, I kept them all pretty dry, because they already have some room tone "baked into the recording of them. If you listen in headphones and compare the raw guitar with the processed one, you’ll hear some subtle roominess on the raw file, but you’ll also clearly hear the delayed reverb panned to the opposite side of the stereo spectrum on the processed file. I really like this technique. This “crosstalk” creates a subtle connection between the left and right sides of the mix - it joins everything in a cohesive way that retains great separation at the same time.

To my way of thinking, and in light of what I’ve described above, that would put the drums “in front” of the piano, and the vocals “at the back of” the “room”. That is the opposite to what I would want when I’m mixing… but … whatever works for you, and…no rules, hey?

To my way of thinking, and in light of what I’ve described above, that would put the drums “in front” of the piano, and the vocals “at the back of” the “room”. That is the opposite to what I would want when I’m mixing… but … whatever works for you, and…no rules, hey?

I can relate to this. It’s not easy to get the logic of how reverb works in relation to the position of the individual elements because sometimes you get unexpected results.

In my experience: even though I often use longer predelays or reverb times on vocals, it doesn’t prevent them from sounding “in front” because there are many other parameters at play (reverb filtering, combination with delay, how much ambience is printed in the source recording, proximity effect on the mic, etc).

that would put the drums “in front” of the piano, and the vocals “at the back of” the “room”. That is the opposite to what I would want when I’m mixing

For example, if you put a tonne of reverb on something with no pre-delay, it will generally sound waaaay in the distance… but now take that same amount of reverb on the same source, and start to turn up the amount of pre-delay. As you turn up the predelay, even though there is a tonne of ambience, the source sound should appear to come closer to you as the listener. Adjusting the amount of high and low end in the reverb will also enhance the effect.

But the more predelay something has, the more upfront it gets???

to add to Andrew,
if you are using true reverbs with proper micing and control over early reflections then changing predelay can give an impression of changing proximity to the mic. Because predelay just delays when the plugin starts working. So you hear the dry signal a tiny bit before the wet, giving an impression that you are standing closer.

this however, wont work with simulated effect verbs as effectively . Sometimes plate verbs wont behave properly either. Adding lots of predelay to a short plate verb may not give that perception. So you need a plugin that has indeed mic’ed these verbs properly to get a clean depth using the predelay knob. You may even need to combine a few different reverbs to get the desired effect. Your ears are the best judge there.