Hi folks, herewith my latest production, a cover of a tune by another of my Americana heroes, Shawn Colvin. She’s best known for the hit tune “Sunny Came Home” in the 90s, but that’s one of her least interesting numbers IMO. An amazing songwriter and phenomenal acoustic guitarist, who favors lots of interesting open tunings, in a similar vein as Joni Mitchell in that respect.

This version is another duet with my lovely wife, inspired by the version of the song that appears on Colvin & Earle, a 2016 collaboration between Shawn and another of my Americana heroes, Steve Earle, on which they do a bunch of covers in duet form (plus a few of their own tunes, like this one).

For this song, the main guitar tuning is CGDGBD, and there are two acoustic guitar tracks, one on my Martin dread and the other on my Pimentel 6-string using the Nashville/highstrung stringing (lower 4 strings an octave higher than natural) both tuned thusly. Also includes a tremolo electric track using my Heritage 535, a mandolin solo, Fender P-bass, and MIDI brushed drums.

V2 from comments on first version:

I keep finding myself logging into here from my phone so I can’t give it a totally fair bashing, but I really like the performance! Well tracked and it translates well on my phone for what that’s worth. Haha!
The only thing that I hear right away that may need addressed are on your wife’s vocal. The “k” and “g” sounds in words are coming across a bit aggressive.
This might be a good idea for a transient plugin? But like I said, I’m listening on my phone, so it may be exaggerating things.
Awesome mandolin and you guys sound great together!!

A few things I’m hearing that could use improvement:

Well tracked and it translates well on my phone for what that’s worth.

Personally, I think that’s worth A LOT since lots of people are listening primarily on their phone.

I feel like the the drums and the guitars are having a hard time keeping in sync with each other.

I also think that the guitars are demanding too much attention and not leaving room for the vocals, and it sounds like you ended up boosting the high end on the vocals trying to get them to pop out, but it just made them harsh instead.

The vocals are the focus on a song like this, and everything else is secondary.

Personally, if I were mixing this song, I’d start with the vocals, bass and drums, and try to get the vocals to sound as good as possible. Then I’d bring in the guitars in such a way that they were filling in the dead space.

Edit: I should also add that I listened to the original song, and there’s a lot of clutter/timing issues with that version as well. Actually, I’d say that your version sound better mixed than the original version, but there’s still lots of room for improvement.

I like the song Dave, and your voices work really well together. I’m listening on headphones plugged into my laptop, which for some reason tends to sound like someone went wild with a transient controller on the mixbus or something, it’s just not a very accurate representation. I recognise comments from the others on the timing issues (the guitars aren’t tight enough in relation to the drums and bass). One of the guitars (strummed) is a bit too dominant in parts with a lot of mids in the same range as the vocals. An eq attenuation in the mids (1-2 Kh?) might help there.
I hadn’t heard of Shawn Colvin before, and being a big time Joni fan I’ll have to check her out too!

Hey thanks everyone! I am just back home after several days on travel, so have some catching up to do. I appreciate all the input! Hope to get some time this weekend to work on a revision.

@bozmillar boz, I especially appreciate your comment about the comparison to the version we’re covering… you’re right, there are all kinds of loose things going on there, in fact Earle even botches a lyric at one point (right after “If Jesus is comin’”). I have no idea why they’d leave stuff like that in there…

@Aef, I recommend Shawn Colvin: Live as a great intro album to her work. It’s a live record with just her and a guitar, so you get the emphasis on the songs themselves and get to hear her stellar open-tuning guitar work. Hope you enjoy!

Hi cw sounds like I am sitting in front of you two. Your harmonies just meld man. like to hear you not singing the entire song in harmony tho. You sing one line, she sings another then some harmony etc. just my two cents bud
love that delayed strumming. Simple stuff is so full. never heard this song before, but you done it good:)

Hey all, back with a revision of this tune incorporating much of the commentary thus far. V2 now in the OP.

I carved out some of the low-mids and put a little more beater on the kick as per Andrew’s comments (nb, this is a brushed kit so the beater is fuzzy). I tried to tighten up the timing of the guitars and drums a bit, especially in the open, and pulled back on the high freqs in both vocal tracks-- they were in fact pretty boosted. (As an aside, I just tested out hearing aids last week and could REALLY hear the highs better, so if I could hear the highs in this, then they must have been over the top!) Tried to get the vox, bass, drums set and then bring in the guitars so that the vocals are in the spotlight. I didn’t want to pull too much out of there though, because I want the vocals to be very up front and intimate, per Paul’s comment. (Although sorry man, this is a harmony duet all the way, don’t want to alternate with solo lines I’m afraid.)

The difference is pretty noticeable in a/b, albeit still a bit subtle, and my only concern now is that my vox is just a tad thin. But I need fresh ears on it, you know the drill… thanks for all the input!

My first reaction was, “wow, what a beautiful intro!” The guitars sound really nice, and it feels like a good mix to me as far as the track goes. I love the pace of the song, and while I do hear some timing issues, I can accept that it’s part of the feeling of the track.

I think the vocals could sound a lot better, though. Your wife’s vocal in particular, sounds thin and processed to me. To me, it sounds like it’s had too many of the lows cut out. Your vocal sounds better to me, though it’s a bit harder to hear. I think that both vocal tracks could be louder, or something done so that they stand out more.

Thanks @Cristina! You’re right that the low and low-mids on both vocals are severely cut, that’s where the bulk of the muddiness that @ColdRoomStudio Andrew cited was. But I think I may have overdone it…

@Chordwainer yeah I’ve found that if there’s muddiness like that, it usually works better to cut it out of other areas of the track. I feel like as humans, we’re way more sensitive to what a voice should sound like than another instrument, so I try my best to keep the vocals as natural as possible. You could even try some kind of dynamic compression that gets triggered by vocals, so that when there are no vocals the track is also as natural as possible.

The vocals sound very compressed. Maybe try less compression on the vocals, or at least try multiple stage compression, with each stage doing a smaller amount of gain reduction. If you think about the way that most pro vocals are recorded, they are recorded with compression on the way in, sometimes even 2 stages of compression. Using an 1176 followed by an LA2A is very common vocal chain. Then the mixer will usually add at least 1 (often more than one) compressors, as well as volume automation to get the vocal to sit nicely in the track and sound “natural”.

The kick is clearer in the mids, but now it’s quite boxy sounding now, tbh. There is still no significant sub bass happening. The kit may be a brushed kit, but the kick drum isn’t played with brushes - It’s still a beater, albeit probably a felt beater instead of plastic. There should be substantial sub-bass on tap. In AD, the kick drum has a kick in (“beater”) and kick out (“front”) mic which you can alter the balance between using this slider: 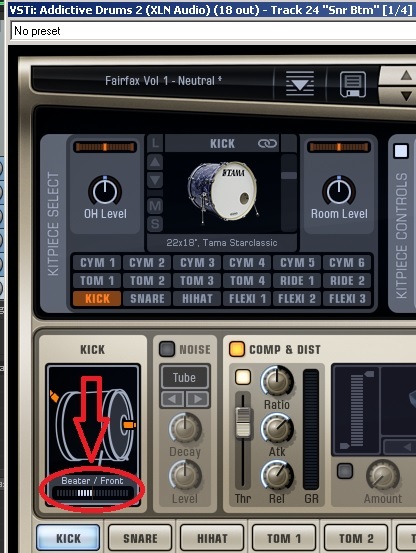 Sliding it toward “front” should give you a much deeper, subbier kick tone. I’d suggest getting rid of some of that 400hz boxiness too with eq.

Thanks Andrew! Funny, I did use that exact slider in AD2 to move the sound more toward “beater” rather than front, hoping that would give more “beat” to it per your suggestion. Guess I moved the wrong way! And yes, the kick drum in this kit does have a felt beater. No reason I couldn’t swap in a regular kick of course, and I’ll try that too.

After @Cristina’s comment I have already done a quick adjustment on the vox, backing off the high-pass and low-mid cuts to about halfway, as you suggested. Definite improvement. I did that just before I hit the road for my science conference, where I am now, and I’ll be out of pocket until next weekend, so no revs til then.

As I have been doing for some time now, I’ve got Izotope Nectar as the vocal processing. It’s a parallel compression on the vox for both voices, but I don’t recall the settings from here in my hotel room. Thanks for the details on analog style, those are good pieces of advice for a vocal in this style.

Hey folks, finally back with a revision on this song from the most recent comments. My science conference wiped me out,as it does every year, and I had a lot of catching up to do that kept me out of the studio.

Plus, I finally got some hearing aids a couple of weeks ago, and I have spent some time listening to a lot of familiar music on my studio rig to adjust to having them in place. My hearing in the higher frequencies is now so much improved! I wanted to get somewhat acclimated to that before I returned to any mixing efforts.

Anyway, with the excuses out of the way, V3 is in the OP. The vocals are improved over V2, no longer so thin and processed-sounding, and I’ve made some adjustments on the drums to get the kick sounding less like a cardboard box… many thanks for the listens and comments on these!