Survey: What are your top 3 vocal mics for recording?

As the title says… what are your top 3 microphones for recording vocals. I’ll be maintaining a top 10 list as input comes and in and then I’ll have a way to keep a vote going for visitors to check out. I plan to make this a series. Feel free to include why the top 3 listed are your favorites!!

Shure sm58 for stage. Rode NT2a large diaphram for studio. Don’t have a 3rd for vocals, but I am fond of PZM.

Shure sm58 for stage. Rode NT2a large diaphram for studio. Don’t have a 3rd for vocals, but I am fond of PZM.

Hey! Welcome to the site! Great to have you aboard

Neumann M149 - for a vocal that needs character and color, I gladly choose this over a C800, C12, Manley Gold, and Brauner VMX on a regular basis when available at tracking studios. I don’t care what singer and what genre, I’ve never heard this mic sound ‘wrong’ on an amazing vocalist in a great room.

The Sanken COS-11D lapel mic is the film standard like the Sm58 is to music recording. Sennheiser MKH for tracking when a boom and windscreen are needed.

My Desert Island vocal recording mic would be a Heil PR35, especially if there were a few Seagulls in the background.

Others I like are the AKG 414EB and the Blue condensers.

I’ve been using a Heil pr30 on all the vocals I’ve recorded lately and I think it’s my favorite right now. Before that I was using a Cad m179 or Akg perception and they were both fine.

When I was selecting the “flagship” vocal mic for my studio about a decade ago I landed on the Wunder cm7. Basically, a handmade copy of the U47 using NOS parts I believe. It has THUNDEROUS low end for voices. It handles sibilance well. Very nice. It is not very modern sounding and doesn’t do that “breathy” thing as well as others. I like U87’s even modern ones. TLM 103’s are really close IMO even though the internet will say exactly the opposite:) Number 3 is an RE-20. It just works. When nothing else is working the RE-20 comes in to save the day, especially in rock and vintage inspired music. There are not a lot of voices that can’t be covered with this combination.

Frankly, I’ve not had enough experience of high end mics to give a sensible answer. But I love the RE-20, Coles 4038, and the time I used a C12 is the only time I’ve heard a voice through an obviously bright mic and thought it sounded fantastic, rather than harsh.

I love my Heil PR35 on male vocals. Rode K2 is a great all purpose vocal mic; I don’t have much experience with high end mics, so I’ll stop my list at 3.

In my bedroom studio, I use my Audio Technica 2020.

Recording a live performance, I use Shure Beta 58As or Audix OM5s (or a combination of both) depending on the vocalists preferences.

Frankly, I’ve not had enough experience of high end mics to give a sensible answer. But I love the RE-20, Coles 4038, and the time I used a C12 is the only time I’ve heard a voice through an obviously bright mic and thought it sounded fantastic, rather than harsh.

IMO there is absolutely no benefit to a “high end” mic if one doesn’t have the room, preamps, console, or singer to get the best out of it.

But when you have those things, life sure is sweeeeeeeeet!!!

IMO there is absolutely no benefit to a “high end” mic if one doesn’t have the room, preamps, console, or singer to get the best out of it.

No. On the second though I disagree with that.

Which would you rather have?

Yes it does benefit you to have the high end mic in scenario 2. The reason it benefits you is its one step closer to not having a shit setup.

A good singer in a good room with a good engineer can use a Chinese 57 clone and no one would know unless you already knew.

Which Chineese 57 clone have you actually tried?

I have this one and its a total piece of shit. Believe me, you’d know the difference.

The problem with that is the word “shit”.

Something being “shit” is subjective. For example, I think the SM7b is absolute shit for a mic. Useless. It’s too big, it’s too dark, it needs too much preamp gain, etc. I hate it. But I know a lot of people like it, so I know it isn’t actually “shit”.

So your scenario is flawed from the get go.

The a priori flaw you’re alluding to is inconsequential to the point. Look:

makes no difference what shit you call shit…the point is you are better off with the second scenario than you are with the first. And yes it will make a difference.

I didn’t know there are variations of Chinese 57 clones. It’s just a microphone. If you can’t make it work, maybe that’s on you.

Um…no. Surely you realize that some mics are just flat out NOT GOOD. Or are you under the assumption they are all of the same build quality?

Basically what I’m saying is, if you mic a snare with a real 57 and a China 57, and the China 57 works better for that particular application, is it a “shit” mic? No, it’s perfect. Not shit at all.

??? Again it assumes the Chineese mic is equally functional and this is not necessarily true. Look, here is my Chineese fake Gibson. I bought it off Craigslist for $50 because I needed the hardshell case the guy was selling with it. There IS NEVER and WILL NEVER be an application where this Guitar is even a fraction as usable as my real Gibsons. 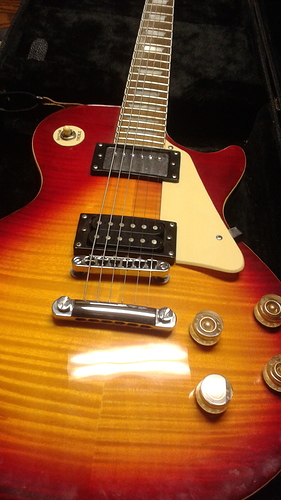 Maybe, maybe not. It depends on a lot of things.

Enlighten me. Name once conceivable instance apart from a scenario where you are asked to destroy or intentionally damage a microphone, will that $13 Neewer mic will ever be preferred over the Neumann. I’m not just trashing cheap gear. I have bought a batch of those Neewer mics. I gave them away two Christmas ago as gag gifts.

Considering Gibson’s build quality, they might be about the same!

Try to understand that not everything is about cork sniffing. Jack White and Josh Homme have made nice careers for themselves intentionally using “junk” equipment.

Btw…If you ever need a sample of good loud full frequency microphone noise for a sound effect, keep me in mind! I CAN HOOK YOU UP!!

I have a love hate relationship with the sm7b. right now i am loving it. otherwise i have not be that inspired or turned off by most of the mics i own. maybe they are just too generic and cheap.

By the way on the argument that broke out… build quality does matter, whether you care or not is subjective.

I think this question has a real meaning only if it’s answered by people who have tried a lot of mics.
Most of us (I think) are home recorders and have little experience.
I have 3 mics for example and haven’t had experience with others.
So, putting those 3 in order of preference