To put it simply, I do not understand summing. I’ve recently started using LUNA and I have the Neve summing plugin. I put it on the master track and it sounds great to me. But I see some people put it (and tape) on every bus too.

SO my question is - do you only put summing on a bus when multiple tracks are fed into it (like for drums, sending each individual mic/drum to a bus and summing all those parts) or does it make sense to send also send just one single track to a bus and put summing on that track before it goes to the master track?

The word summing means adding so if it is just one track (like a single guitar line), is it actually doing anything or do you need at least 2 tracks going into a bus so that the plugin has something to add together??

I hope that made sense!!

I do not understand summing.

Summing is simply adding signals together. In the digital domain, tracks sum together perfectly, with no unplanned additions or subtractions occurring in the process.

In the analogue domain (for example, on a large format console), summing is imperfect, because it is influenced by all the components that the signal has to pass through in the signal path. This could include transformers, analogue equalisers, analogue compressors, and all the associated analogue circuitry etc etc.

All of this results in distortion. Now, let me qualify the word “distortion”: In the strictest sense of the word, as it pertains to audio, distortion simply describes the case in which the output signal differs from the input signal. In the real world, this distortion is often very subtle, and is actually perceived as an improvement to the source sound, imbuing it with a sense of “weight”, “clarity” and “depth”.

Additionally, when a number of analogue channels are summed together in an analogue mix buss (output channel where all the individual channels join into one stereo channel), the effect is further enhanced, due to the fact that variations between the “imperfect” analogue channels result in subtle phase shifts and “crosstalk” (bleed between channels), and subtle electronic differences between the stereo output channels.

This results in another layer of subtle compression/saturation which is often perceived as subtly “gluing” the individual channels together, and creating more “width” and “depth” in the soundstage.

Hence when digital audio and “pure” digital summing (ie within the computer or “in the box”) arrived on the scene, engineers and audio people who were used to the subjective euphonic “improvement” caused by summing in the analogue domain would often accuse pure digital summing as being “inferior”. Because of this, plugin developers started to develop " analogue summing" emulation plugins to try to imitate the phenomenon so many were familiar with.

SO my question is - do you only put summing on a bus when multiple tracks are fed into it (like for drums, sending each individual mic/drum to a bus and summing all those parts) or does it make sense to send also send just one single track to a bus and put summing on that track before it goes to the master track?

As mentioned, analogue summing emulations present a very subtle variation on the saturation/distortion theme, as do tape emulation plugins. Some analogue emulation plugins (for example Slate VCC and VTM) are actually designed to be used on multiple channels and once, and attempt to model the crosstalk between the channels that happens in the analogue world.

Their use is completely an aesthetic choice. The reason many mixers like to use multiple instances across a mix is because it can be a way of emulating the analogue workflow in the digital domain, and experiencing somewhat comparable results.

Think about it: In the analogue days, the signal was recorded through an analogue desk, probably being eq’d and compressed on the way in. It then hit 24 track tape. That 24 track tape was then sent back out through the channels of an analogue desk and processed further with eq, compression etc. Then it was summed to the analogue mix buss of the console, and the mixed to a separate reel of 1/4 inch stereo tape.

I actually used a very comprehensive “analogue emulation” workflow to this for years, and it does indeed impart a subtle (but noticeable) difference to the way a mix comes out. Is it better? I would say, it depends on your personal aesthetic and workflow, and whether it gets you closer to the sound you hear in your head. The only way to find out is to try it.

I hope that answers your questions.

it is just one track (like a single guitar line), is it actually doing anything or do you need at least 2 tracks going into a bus so that the plugin has something to add together??

Sorry, I forgot to address this question specifically… Again, keep in mind summing plugins are typically quite subtle in the effect. The Slate plugs are quite subtle, the Waves ones less-so… Usually to hear summing plugins actually do something overt on a single track, you have to push them to their extremes… So it’s really a matter of try it and see. It may work on a single track, it may not make any noticeable difference - it depends on the specific plugin and the use.

WOW. Thank you so much for all that. Such an “above and beyond” response!!!

That has given me a lot to consider. I’m finally getting a room set up for recording this weekend so hopefully I’ll have some material to experiment with ASAP!

I also have the API summing plugin in LUNA as well… have you ever "double summed’? Might be an interesting effect if I summed my whole mix then sent that whole mix to the master track with the other summing plug on it? I’m so curious now… can’t wait to get to work!!

I also have the API summing plugin in LUNA as well… have you ever "double summed’? Might be an interesting effect if I summed my whole mix then sent that whole mix to the master track with the other summing plug on it? I’m so curious now… can’t wait to get to work!!

Sure, you could try it. It would be similar to a scenario where a song was tracked on one console, then mixed on another - which used to happen a lot… I have an Apollo myself, but as yet I haven’t used Luna… I suppose the only limit would be the amount of on-board processing power available to you with your UAD interface…

I seem to remember a heap of contention around summing… to sum or not to sum… digital/analogue/myth/game-changer…?
it was a bit like the endless tone threads, so am interested to read your thoughts on this Andrew.

Hi Emma! Yes, it was all the rage around 2010 or so…Interest seems to have died off quite a bit these days. I studied it pretty intensely at the time, and did some of my own experiments. It is definitely a “thing” that makes a difference.

That said, I’m relying on it less these days, and I don’t think my mixes are suffering as a result. I think, for the most part, I’ve found alternatives that are a lot more predictable and controllable. I think I consider it just another “flavor”, rather than an essential per se.

Possibly it has to do with tastes shifting away from the classic rock era of record production… who knows? It’s all part of the fun!..

I’ve done a fair bit of playing around with summing type things. There are things like Waves NLS, which are basically just lightly distorting every channel then also distorting the bus, and they can be nice for a vibe but aren’t really summing anything.

Airwindows have their “Console” system, which is more subtle and imo more worthwhile if you actually want to subvert the perfect summing of a DAW, but it can be a pain to implement it because to work properly you need there to be no volume change between the channel and bus plugins - not easy if the DAW doesn’t have post-fader inserts!

Is this what Ethan was referring to in his article? -

This article describes the audibility of audio artifacts.

Is this what Ethan was referring to in his article? -
https://ethanwiner.com/audibility.html

You’re not wrong: Ethan Winer has demonstrated on several occasions that the claims of hearing a “huge” or even “significant” difference (some people claim they can hear a fuller or denser mix with dither) between a dithered piece of audio and just a truncated one is unreasonable.

I hope that answers your questions.

Andrew, you should get the Golden Mind badge as well. This is not only super detailed, but it is also very well laid out in how it reads. I think writing is another one of your gifts because most of the time, stuff over my head, I just skim in. But this I enjoyed reading, it is very user friendly.

I’ve always enjoyed writing, ever since I was very young. Thankfully my spelling, punctuation and grammar have improved (somewhat) since then!

… On the subject of Summing, I just came across this yesterday - quite a revealing little null test he does toward the end of the video. The differences are pretty easy to hear on a home studio system. 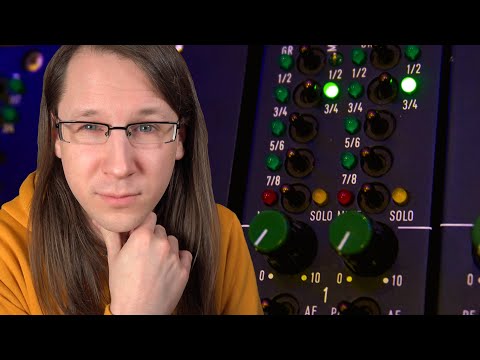