The designation #1 is just in case this thread actually gets some mileage and calls for further case studies, i.e. “ROcktober”.

Yesterday I was listenting to a Rhodes piano VI clip, and it reminded me of the intro of this song. One of those memory trigger “blast from the past” things, so I investigated further. This song was hugely popular on radio back in the mid 70’s, and while it was odd and unusual it did get my attention. And that’s saying something, considering that at that time I had been recently initiated into the realm of Heavy Rock music (i.e. Aerosmith “Rocks” album release).

The story behind the song turned out to be very interesting. I knew virtually nothing about the band 10cc or this song other than my listening experience over the years, and it’s one I hadn’t heard for a long time until yesterday’s Memory Alpha incident.

I was impressed with the description of recording the vocals, which feature prominently. And this was about the same time that Queen were recording “Bohemian Rhapsody” which garners much more attention. The ‘airy’ and ‘spacey’ sounds also remind me a bit of Jean Michel Jarre “Oxygene” and Gary Wright “Dream Weaver” which were around that same time too. These were perhaps some precursors to what we now call New Age music, in terms of musical textures and ambiance.

I am posting references for you to peruse as you wish. The “Making Of” video features the song in the last half of it. Interesting that they recruited the record label secretary to do that “big boys don’t cry” whispering part. Almost a precursor of ASMR? There were a lot of creative and experimental aspects to the making of this song, as well as how popular it became while not fitting traditional genres.

I’m guessing this song triggers memories and experiences for some of you, so please comment on that or the recording and inspriration aspects if you wish.
.

I'm Not in Love

"I'm Not in Love" is a song by English group 10cc, written by band members Eric Stewart and Graham Gouldman. It is known for its innovative and distinctive backing track, composed mostly of the band's multitracked vocals. Released in the UK in May 1975 as the second single from the band's third album, The Original Soundtrack, it became the second of the group's three number-one singles in the UK between 1973 and 1978, topping the UK singles chart for two weeks. The song was also the band's bre... 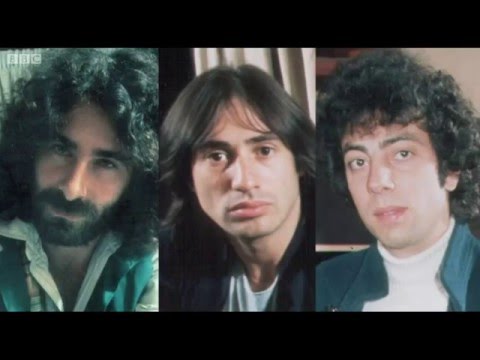 We must all remember that 10cc’s I’m not in Love started off life as a Bossa nova cabaret song. I love what the song ended up like, but I feel like the world missed out on a Bossa nova classic…

Yes, I saw that in the video, and was quite surprised at the song’s evolution. The final creation process seems like kind of a bizarre obsession … but one that ultimately created a hit song of global proportions. Multiple things I noticed about the whole process were: inspiration (from an interpersonal story), band reactions and negotiations, playful creativity for an alternate version, commitment to an unusual idea, obsession and compulsion “to boldly go where no musician has gone before”, and realization that something really fantastic had been created and needed to be shared with the world. Oh, and experimentation throughout many of those aspects. If any one of the elements hadn’t been there or hadn’t panned out, we never would have heard it. The Muse works in mysterious ways.

The production was amazing, but more than anything else, I’ve always loved the lyrics in “I’m not In Love”… “I keep your picture upon my wall, it hides a nasty stain that’s lyin’ there”…says so much about the song’s protagonist in one couplet.

10cc’s Lyrics have a sly humor about them that just make them a cut above the usual dross… “Rubber Bullets” and “Art for Art’s Sake” are other favourites of mine for their particular brand of sly observational humor.

Yes, they’re very interesting and intriguing, even “evocative” perhaps. I had always got the sense that it’s a man who is very much in love with his lady, but uses the device of “denial” or aloofness to describe his feelings. These days, I believe they call it “emotionally unavailable”.

Not far off I suppose, as this is how it’s explained in the Wiki article:

Stewart came up with the idea for the song after his wife, to whom he had been married for eight years at that point, asked him why he didn’t say “I love you” more often to her. Stewart said, “I had this crazy idea in my mind that repeating those words would somehow degrade the meaning, so I told her, ‘Well, if I say every day “I love you, darling, I love you, blah, blah, blah”, it’s not gonna mean anything eventually’. That statement led me to try to figure out another way of saying it, and the result was that I chose to say ‘I’m not in love with you’, while subtly giving all the reasons throughout the song why I could never let go of this relationship.”

That story is footnoted to this SOS article, so yet another resource for me to post:
.
https://www.soundonsound.com/techniques/classic-tracks-10cc-not-love

This “studio gems” series is a great idea!

This is an interesting song indeed. I never really paid much attention to it until recently when I learned how the background vocals had been recorded note by note and the mixing board was kind of played like an instrument. I have a very different perception of the song since then. This is the kind of story that makes me regret I wasn’t born sooner. I am not an analogue gear enthusiast but I feel like these years when the production process was so intense, involved all this gear that was both a blessing and a curse, and made recording sessions such an intense experience were very special.

This “studio gems” series is a great idea!

Thanks! That encourages me to keep coming with more of them.

This is the kind of story that makes me regret I wasn’t born sooner. I am not an analogue gear enthusiast but I feel like these years when the production process was so intense, involved all this gear that was both a blessing and a curse, and made recording sessions such an intense experience were very special.

I do relish having grown up in the 70’s (teen years) with the classic 60’s stuff still on radio airplay, and new great music coming out all the time. As I mentioned before, I was getting into heavy Rock around the time this song came out, but really enjoyed it on the radio.

This ‘Gems’ series will likely focus on classic analog recording and techniques from many years past. There’s a lot of truth in what you said, in that the hardware and processes drove a lot of the vibe and culture that went into the music. Not only were there lots of jobs required (i.e. secretary/vocalist combo

), but having lots of people together in a space brought lots of creative input, and with studio time being quite expensive comparatively, there was usually a pressure to get things done and come up with something impactful and meaningful. I think we have lost a lot of that today, where one person in a home studio can do virtually ALL of the tasks required to produce music, given a modest budget and decent recording space.

Absolutely! Reproducing the analogue magic with a computer once seemed impossible but these recent years there has been so much progress made in this domain and it’s only a matter of years before we can do exactly the same. However, the process, the vibe and the magic of being in the million-dollar studio… that I’m afraid, is lost forever.