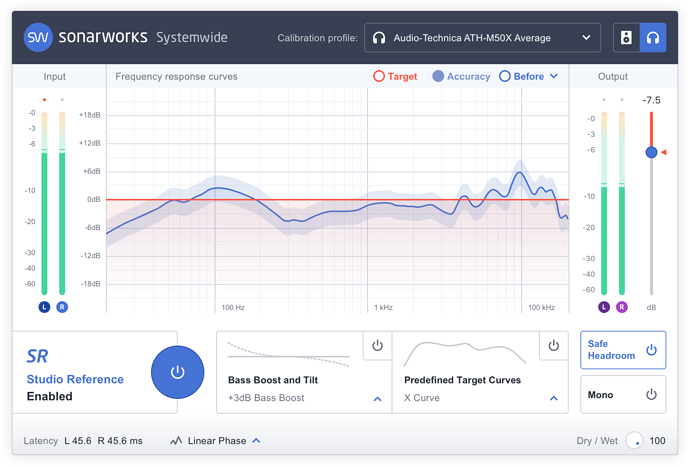 Solving an age-old problem for a new generation
“The entire professional audio community is acutely aware of the fact that every room and every headphone invariably has the effect of coloring sound. This has had an enormous negative impact on both costs and productivity — not to mention creative workflow. We estimate that at least one-fifth of the effort in the music industry is spent dealing with translation issues,” said Martins Popelis, VP and co-Founder of Sonarworks.

“By establishing Sonarworks SR, we have an opportunity to align the entire audio industry on a common audio reference that works with unprecedented accuracy across different locations, devices and operators. We want to liberate music creators from monitoring translation issues so they can focus on musical decisions rather than working around the physical limitations of their room and gear,” he added.

Starting with the latest update to Reference 4, Sonarworks SR will be included in all of Sonarworks software products, effectively reducing the need for professionals to check their mixes on different listening systems while dramatically improving workflow and production times.
“With the launch of Sonarworks SR, Sonarworks brings us a much needed new standard on headphone calibration and compatibility,” comments Rafa Sardina, a twelve time Grammy award winning producer and audio engineer. With many more nominations in his pocket, Rafa is one of many studio professionals worldwide who feel that a new standard would greatly improve music production.

A new standard with professional ingredients
The Sonarworks SR standard is comprised of patented sound measurement technology and professional grade signal processing. The result is unprecedented accuracy (+/- 0.9 dB) among different locations, playback devices and users. The standard works equally well on both loudspeakers and headphones and is simple to set up. Sonarworks SR also employs an innovative speaker measurement methodology that captures sound from 37 data-source points — which was determined by Sonarworks researchers to be the optimal point count providing superb accuracy and measurement repeatability.

About Sonarworks
Sonarworks is a Europe-based audio software development company specializing in acoustic calibration and DAW plugins. Accurate sound is our passion. The company was founded in 2013 and entered the pro audio market in 2015. Sonarworks software is relied upon by many Grammy winning artists and engineers around the world.

I’m sorry, but I find it a bit off-putting to join a forum to hock your wares. I’m actually demoing Sonarworks now because I was looking for something easier to set up than Room EQ Wizard.

I tried out the headphone piece, but honestly, I mix 95% of the time with monitors, so am more interested in that. Initially, support was great with my stupid questions, but I never received an answer after asking if I could use another mic to tune my room. So I guess the demo is done.

When I have the patience to try again, I’ll be checking into the ARC System 2.5 by IK Multimedia which looks to be on sale at the moment…

Don’t get me wrong, the software looks great, but it’s also more expensive than ARC 2.5 and apparently you can only demo the headphone piece.

I’m sorry, but I find it a bit off-putting to join a forum to hock your wares.