Some new areas I'm studying and researching in mixing

Dave Pensado and Warren Huart have both commented on commonly reoccurring problems they see (especially with younger mix guys) involve the balance and management of the 120-180hz space and below.

I confess this is one of my weak areas. But it’s important. And when mixing, LF translation has many challenges. I’m going back and revisiting a lot of training materials on this.

For the last month I’ve been paying careful attention to how bass guitars interact with the environment around them. They’re such a crazy animal to me! Over the last several years I’ve often just shoved the bass into the mix, inserted a one-off like the Waves JJP bass on it and turned knobs or clicked through presets until something sounded reasonable. But as my client base has started to sweeten into some higher stakes projects I’ve started to feel the pressure of having a solid handle on this.

So I plan to dedicate a good amount of time to this over the next couple months refining my process of fine-tuning LF. I’ll spend time researching, examining, looking at training materials, experimenting and always seeking to apply this stuff to projects I’m working on at the moment.

Ps…I picked up the UAD Ampeg sim for $25 today! Yay for coupons!

I’d love to see how you progress with this. It’s a weak spot for me too. Particularly in learning how to get bass to translate well on smaller speakers in a way that I’d like.

It’s a weak spot for me too. Particularly in learning how to get bass to translate well on smaller speakers in a way that I’d like.

Here’s some thoughts and some questions that I’m gonna be digging into over the next month or so.

As a quick reply, translating to smaller speakers like a laptop was never difficult for me. Its going the other way around where I’ve completely bullshitted my way through mixes.

To get the bass to cut through small speakers, try boosting at 700 and scooping at 800 while also heavily saturating and making extreme boosts around 2-3k to add string rattle and pickup noise. The bulk and roundness of the strings seems live in the 125-200 range, but you have to maneuver and duck some frequencies around the kick drum. Then when you’re kick is hitting around -3db vu soloed, you when you solo the kick + bass, you generally want the bass to add 3db so your needle will ride pretty close to 0 dbvu. If it doesn’t ride pretty close to that zero point, that immediately implies some dynamics management is needed with the kick, bass, and any sub synths that are present in the mix.

On a deeper level, I think I understand what makes a bass guitar audible and defined. What I’m struggling with is largely the LF aspect. 1) how to determine when the ratio of all sources contributing to the sub (underneath 120 hz) range are dynamically balanced and 2) what sources are primarily responsible for that content and 3) what they should be doing to achieve that proportional balance in terms of EQ.

Here’s an example: if the kick drum is tuned to thump at 64 and has an acceptable resonance spike at 120, do we push lets say…90hz on the bass? Or is the distinction between 64, 90, and 120 so low that its a wash to the human ear? Or if the hi-pass is not engaged on the kick and we’re hearing a good amount of 40 and 50, do we have it share some of that register with the bass? This is a lot harder than saying just use your ear. Because my problem isn’t shaping the tone into something I think sounds pleasant. My problem is preemptively accounting for translation issues in a room that I don’t think can be improved much more than it already is. The study (for me) extends a bit beyond music though. There’s a lot of stuff I need to understand better to be able to up my quality grade for mixing film and games. LF is LF regardless of what creates it. Get the music stuff under control, and I think it will teach me a thing or two about controlling LF in Foley and SFX.

But back to music, other stuff I need to learn is gear related. I don’t think its all that hard to tune a single bass track in a mix. Where the management of the low end image gets really complex (for me) is when you start blending multiple amp sims with the DI signal. There is a question of what roll each of the bass amps takes, and this is completely new territory for me because I know next to nothing about bass guitar gear. I’m also confused as to why some people are using SM57’s on bass cabs which seem like a totally not logical mic choice. The other one that surprised me is the frequent use of U47’s on cabs. I understand the reasoning behind the Royer 121 and the MD421. And an Sm81?? That’s the last thing I’d ever put on an 8x10 Ampeg if I was micing it in a live room? All new territory here

I’d love to see how you progress with this.

So I’ve been studying, drilling, and practicing around the clock on this (on the job of course lol). Picked up a few new toys which have helped.

So what I’m finding here is that the matching amp and tuning the amp to the style is 90% of getting that perfect balance between the kick and the bass. Once the appropriate style of amp is paired with a logically matched instrument, a lot of the tuning is is coming down to the accuracy of the room, having a good grasp on referencing, and managing the cumulative effect of multiple bass tracks + stacked and layered kick samples. Its not particularly easy. I’ve found myself constantly switching between 2 way, 3 way, and 3 way + Sub monitoring to make sure the entire mix isn’t relying on bottom that is going to disappear as soon as it gets played on a laptop. Then I’ve had to monitor at a lot of different volume levels to figure out what’s causing certain low end artifacts.

I’ve had to be more conscious lately of the effect that the program material has on metering. And I haven’t started using analog summing again, but plan to soon. I’m curious to see what (if any effect) that has on the low end response.

Another thing I started messing around with is one of these: 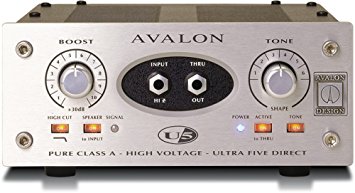 Shot 2 tracks with it yesterday where the guy was using a Warrior bass, and it sounded stunning.

that Avalon looks nice, Ive heard the Reddi is great too.
I came to realize as important as the bass is spending some cash on it isnt a bad thing.
Does it sound better than a Squier in a interface DI with a plug? I dont know.

Do you get much better sound from the Avalon or is it more a work-flow benefit?
Everything Ive tried so far just never seems to be better than my interface and plugs…soundwise… hardware wins for the anti-mouse vibe, fast tracking, no plugs to deal with just hit record … I like DI, but then I dont have a good room so DI is mandatory.

BILLIE JEAN-
“The bass on this was fantastic - the bass player is Louis Johnson from the Johnson Brothers and I picked him up with a DI, which I still have - it’s got a UTC transformer in it and I got it when I lived in Chicago and the low-end is incredible - very warm.” Quincy Jones

Does it sound better than a Squier in a interface DI with a plug? I dont know.

The boost has a similar effect to the Aphex Exciter or the BBE maximizer. The Tone shaping knob is like a fixed interactive EQ. The ‘what goes in’ rules still applies of course, but when you have an outstanding player with a ridiculously high end instrument, I would say it does a little better than a Squire with a D.I.

I’ll put my bet on the outstanding player …the AVALON looks like great unit. I like the simple design but a bit more than a super simple di radial box…dang JK those interfaces and plugs are just so close its getting hard to spend the money.

I’ve been using that thing because its sitting around the dudes studio and its available. But I have no doubt that a UAD unison pre or something could get the job done as well.

I’m told there are a few things about active DI’s and the impedance loading that make a little bit of a difference in the tone. But yeah, its mostly the player. However, once you get past the player, part of the decisions about what to do with the bass guitar once its captured, has to do with how you captured it. So it is a little of both