Hey folks, putting this in the Singers & Songwriters category because I’m highlighting a fine composition by one of my musical heroes, James McMurtry, whom some of you may remember me mentioning previously. He’s a masterful songwriter, a real treasure. His forte is to inhabit some character or other and convey that character’s world view in some fashion. A remarkable ability.

This one is called “The Lights of Cheyenne” and is from the point of view of a middle aged rural woman in an abusive relationship (he often writes from a female perspective). Not a happy (or short) song but it really illustrates his gift, to whatever extent I can manage to convey it. Thanks for checking it out. 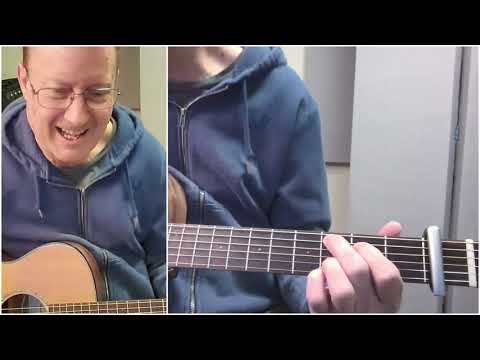 Sounding good Dave, thanks for sharing.

Oooh enjoyed that thanks Dave… hadn’t heard that song before - thanks!
Nicely done.

Cool song, kind of depressing though. I’ll have to check out McMurty’s other stuff, I don’t know him. Guitar players thank you for the split screen, others may not understand

Thought of you the other day, I ran across Blaze Foley, interesting character. I figure you probably know him.

Nice work, Dave - Great to hear some music 'round these parts!

Hey thanks folks, appreciate the listens. Indeed, not an upbeat subject, but very real for way too many women…

Tech details are pretty simple. Recorded video with my Android phone (left panel) and Surface laptablet (right panel), and had my AT4040 condenser just off-camera. Used the surprisingly good audio from the phone plus the AT4040 track and panned them 75% to either side. Did some EQ sweeping on each to search & destroy bad pileups, put a little light compression on each, and sent them to a reverb to give a little space. Pretty minimal.

I played my new Breedlove Pursuit concert-body guitar that I talked about in the “old guitar is new again” thread from a few weeks back. Great sound and feel on this instrument, I’m real happy with it.

Ingo, hadn’t heard of Blaze Foley before, but will check him out…

Nice song and good performance. The guitar sounds quite good too! Is this recorded in your sound treated room with the absorption panels? I bet if you recorded your vocals separately from the guitar, in close proximity to your AT4040, your vocals would sound great. They sound good here but you would probably get a much richer and fuller sounding vocal if you did a “studio version”. Having said that, you did a really good job with this and it’s interesting and fun listening and watching a live video. Two thumbs up !

Yep, like everything else, it’s in the studio with the GIK panels, that’s where my music rig is. Of course, recording things separately would give a better sounding result, but the whole point here was to do a live, solo, one-take rendition rather than a “studio version”. McMurtry himself has only ever played this song live, it does not appear on any of his studio albums (but it does on a live album), as it happens.

JM has been doing one-hour live streams each Weds evening and Sunday afternoon on his Facebook page, which has been awesome. He’s just sitting at his desk with a bunch of acoustic guitars in his various go-to tunings, so one has a perfect view of how he’s playing, and playing back the streams makes it easy to work out the tunings. Plus, a big bunch of McMurtry fans have gotten to know one another from a fan-group page and especially from the chat going on during the streams (we have labeled ourselves the “McPeeps”). I had a fair bit of trepidation putting this out there, because it’s one of his most beloved tunes, but they dug it.

Thanks for the listen and feedback W!

I signed on to his FB account. It is a bit humbling to say the least. It’s as good as it gets IMHO.

I had asked you on a previous video on how you could pull off such a good recording without visible mic’s? Mine are never more that a foot away (AKG) and this temp shure not more that two inches

Your singing is spot on for pitch, I have to fix many notes as of late, so I couldn’t do this ( I don’t think)

Natural stuff is hard to find these days…big congrats Dave

Many thanks Paul, much appreciated. These are pretty tight shots on both cameras, so there isn’t much of a field of view. The AT4040 was sitting about a foot and a half from me, just below where the laptablet was set up and out of its view. And the other camera was pointing straight at me, so it was off to the right. It’s a pretty decent condenser, not top of the line by any means but it has no trouble picking up the sound. I have the input level at only half or so on the interface box…

Glad you liked McMurtry! Check out a couple of those livestream recordings, the guy is amazing to watch (especially when you know the songs backwards and forwards like the rabid fan I am). He’s got a couple of tunes where he is delivering staccato, rapid-fire torrents of words all while just burning it down on a 12-string… amazeballs. I couldn’t get those lyrics out in one take if my life depended on it, just standing there reading them, let alone singing while playing…!

Yep, I should agree it’s a great performance with some little details here and there and it avoids a loopy feeling some kinda songs could have.
I’m really impressed how consistent is your performance, strumming is very steady, tempo isn’t off somewhere.
Really really great.

Hats off from me!

Thanks very much indeed, I appreciate the kind words. Hope you’ll check out the original artist!

James’s father, Larry, just passed away this past week. He was a Pulitzer-prize winning novelist and Oscar-winning screenwriter, quite the literary giant. His works include The Last Picture Show, Lonesome Dove, Terms of Endearment, Brokeback Mountain. James certainly inherited the literary gene, as evidenced in his amazing lyrics.