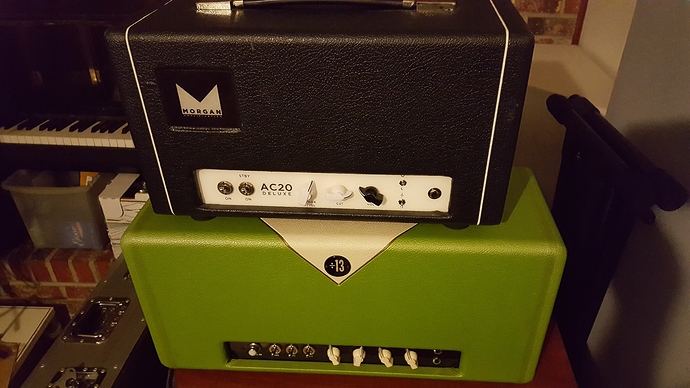 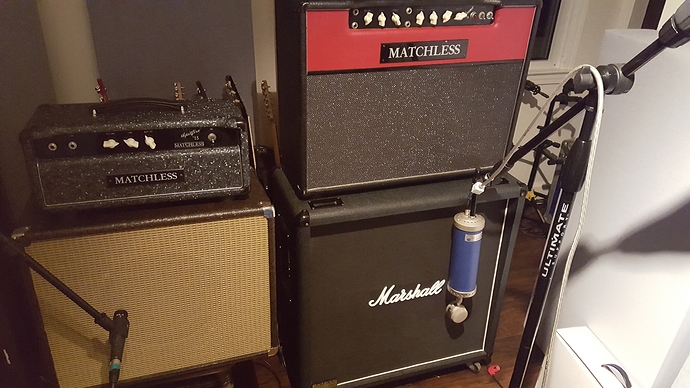 I’ve never liked the SM57. I always thought it sounded cheap, scrawny, muddy, and dull. I had a producer through yesterday to track guitars. After futzing around with a Telefunken CU-12, a C414, and about 3 capsule changes on the Blue Bottle, he suggested trying the SM57. I wasn’t to keen to the idea, but went for it anyway for the first time in about 4 years. The dry unprocessed sound was amazing. Actual signal chain was a Duisenberg Starplayer TV, through a Timeline and POG, split using a stereo reverb pedal into a Morgan AC20 and a /13 915. From there, the mics went into Blue Robbie preamps with the 20db pad engaged, then strait into the Avid HD i/os.

The speaker on the left in the picture is a custom built cab with a greenback. The Marshall was attached to the /13 and has stock G12’s. We actually had problems getting the Blue close enough to the grill. I had wished I’d grabbed the Bottle Rocket, because its much easier to move around and position.

So here’s what I found. Up close, on crunch and overdriven tones, one both amps were dialed in to compliment each other, and both mics were placed optimally on the speaker cone, and phase was accounted for, *the mic itself didn’t matter that much. I couldn’t believe it, but because of the way we were using it, the Blue didn’t have much of an advantage over the SM57.

I ended up using the Blue B7, which is their U47-like capsule. Both mics were blended together and committed to the same track. And I’m gonna tape a square to the Marshall grill cloth so we know exactly where to put that mic next time (its hard to see through the grill cloth). The next time we need a similar sound though, I’m just gonna grab two dynamic mics, because that huge Blue mic which needs a special stand, and takes 2 people to adjust because its sooooo heavy, is just not worth the trouble for a very very similar sound.

Long story short, I’ve never really gotten a sound I loved out of an SM57 until last night. If anything, it reminded me how critically important the source is. A good player, with an outstanding instrument, through great amps, matched with proper cabs. Beyond that, take some basic mics, put them in the right place, make sure your phase is good, and track away!

We’re coming back tonight to do round 2. We left everything set up. I can’t share the actual recording yet, but I’ll ask him to track some samples just to demo the audio. Will post later tonight

Long story short, I’ve never really gotten a sound I loved out of an SM57 until last night.

Perhaps because you have been indulging yourself in all the high end stuff until now?

We had many of these discussions, many times, on RR. While really high end stuff is cool, and certainly can be useful for some things, microphones are tools. And finding the right/best tool for the job is usually more important than pretty labels or snazzy features, or the price tag. On one hand, microphones are like ears, in that they are designed to pick up sound somewhat analogous to what our ear does. Should I trade in my ear for a ‘better’ ear? But conversely, microphones are not that much like ears because they can be designed to do things our ears can’t and in many different ways. That offers a wide palette of possibilities for creativity and sound design. Was the Mona Lisa painted with an expensive brush or a budget one? Do expensive brushes make better paintings? What is the definition of better?

The Sm 57 is my go to for guitars. If you’re not getting what is coming out of the amp with this, then something is wrong. One trick I use every time is to surround the amp with bass traps. It makes it sound direct and even closer to the mic than it is. I put bass traps behind the amp, the sides and behind the mics. You can use almost any mic when you do this and get a great sound. I’ve used cheap ribbons, 57’s and condensers using this technique all with great results.