This is a question derived from the Ear Fatigue thread here:

Hi all Being new to mixing in general, I’ve taken into account wise advice of mixing at low volumes, taking breaks and so on. But while mixing I get what I term “ear fatigue”. Basically listening to the mix over and over, after some time I lose the ability to understand what’s happening in the mix. At this point I start making stupid decision with EQ’s and compression and generally start to mess up the mix. Just to clarify, I’m not sitting for hours in front of my monitors and actually getting tired. It’s just working on the mix and going back to it again and again seems to wear my ears out. …

Based on the fact that you can’t mix what you can’t hear, I took the sub-woofer from my living room and moved it to my basement “studio”. It is what it is - budget stuff for a hobbyist.

There’s a dial on the back of the sub from 50Hz-200Hz to set its cut-off frequency. There is an overlap with my monitors’ frequency response from 56Hz-200Hz. 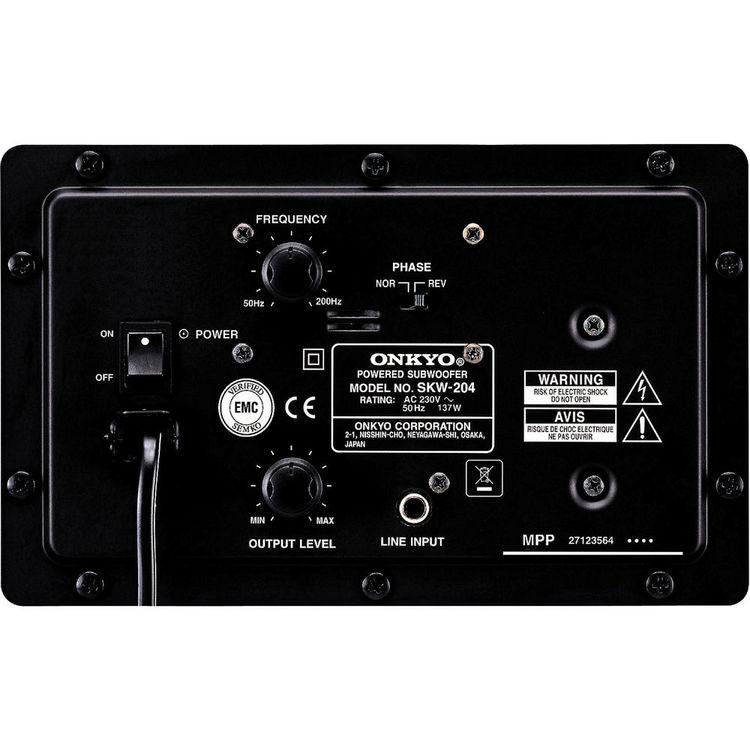 I suspect the answer lies in the room correction software and getting as flat a frequency curve as you can, but I’m wondering if there’s an interim solution. I did it very unscientifically as just dialed it in while listening to different “reference” tracks to where I thought it sounded good and filled out the low end.

Well… Personally I’d run some sin wave sweeps, see where your monitors start to give up as the frequency sweeps lower. They’re ported so they’ll probably be a bit uneven leading down to that 56-hz mark (maybe even getting a bit louder around 56 hz) then fall off really quickly below that.

To avoid crossover weirdness I’d start with the sub just doing 50hz and below to minimise crossover. And yeah, try the phase switch.

Really, at anything sub ~150Hz any speaker is at the mercy of the room it’s in, even if you’ve put some effort into treatment. You can easily get 30dB peaks and troughs because of standing waves, I remember the first time I experienced that - a 90hz signal was totally inaudible in one place, except that the shelves over on the other side of the room were rattling and my neighbour started banging on the wall

In practice the best thing would be to be able to run a sin wave from, say, 200hz down to 20hz and have it be pretty even volume wise. So I’d do whatever I could to get close to that ideal. People often have the sub way too loud because that’s fun, but then you’re tricked into mixing into that big low end…

…of course, if you’re having fun and you know the system, maybe that’ll be fine.

And listen to a lot of music that you love on the system, once it’s set up. Get used to what good records sound like in your room. That’s the only way to get around the absolute fallacy of trying to second guess what you’re hearing!

I’m very much not an acoustics guy, but I’ll tell you what I’ve been doing. I use Focal Sm9’s. They have built in subs. Even for the systems that don’t have built in subs, the guys who engineered the speakers said don’t even use the crossover unless you have to. Turn it off completely and run the sub at full range along with the tops.

So I have 2 subs. I have no idea how this works, but I constantly switch between 2 and 3 way mode to monitor for low end image translation and normal translation.

Just yesterday, I moved in a 7.1 surround sound monitoring system. I’m setting this up directly on top of the Focals. I’m using JBL 4328’s for 5.1 with and additional pair of 4326’s for mid fils. I can’t do mixes on these that will compete with multi-million dollar dub rooms in NY and CA, but its enough to satisfy the requirements for an endorsement from my states film commission. The JBL is a 12 incher - the surround system comes with its own RMC that automatically calibrates the speakers and crossover to accommodate a series of room sweeps. 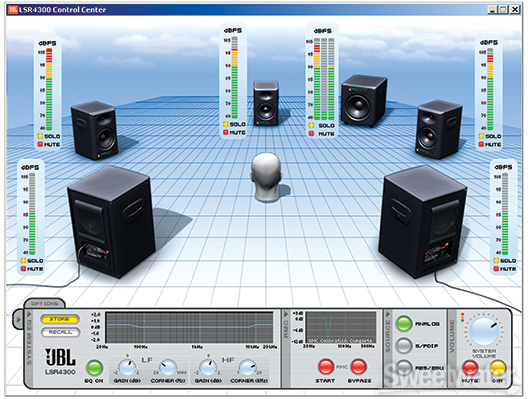 I really don’t have any direct advice here, because I’m really out of my element. I’m throwing this out there hoping it might give you some ideas or that someone might be able to take something relevant away from it.

Phase is most definitely an issue at low frequencies. Ideally, you’d run it through some sort of crossover to reduce interference, but if it’s not possible, your next best bet it to just hook it up and measure it. Room placement can make a huuuuuuge difference to how it sounds in your room. When I was setting up my new room, I put the sub where I wanted it, but no matter what I did treatment wise, I had a huge null at 50Hz. Move the sub over to the other side of my desk and the null it gone (or more likely, somewhere else in the room that I don’t care about as much).

Really, all you can do is try and measure.

Okay, here’s a simple way of doing it. If I’m seeing it correctly, the sub you are using is probably part of a packaged Onkyo surround system. If that is the case, try setting the crossover up at about 80 to 90 hz. From there , put on some music you are very familiar with, and play it at a very low level with the volume off on the sub. If you have someone helping, have them slowly star raising the volume on the sub just to the point that your main speakers sound larger and more open. Now turn the volume up on the system and listen for any low notes that stand out by themselves, and tweak the crossover point on the sub up a touch if you do. Fiddle around with a few different songs you are familiar with and repeat the process. If you have trouble getting rid of doubling frequencies after tweaking, move the sub out of the corner and away from the back wall a touch until your listening position works with the sub position. Sweeping works visually too, as does room correction, but for starters this gets you in the ballpark.

Thanks guys! I’m really liking it so far!

Here are my monitors and specs:

There’s a dial on the back of the sub from 50Hz-200Hz to set its cut-off frequency. There is an overlap with my monitors’ frequency response from 56Hz-200Hz.

I’m wondering how you have everything set up and wired, since you say you brought the subwoofer from another system. Some of the things you stated above sound like you have full signal going to both systems (pair of monitors / subwoofer) and are trying to play the sub crossover to all these other elements. The usual function of a crossover is to split a signal between systems with no duplication, as I understand it. The crossover, at whatever frequency you choose, should send all freq’s below to the subwoofer and all above to the monitors. I don’t think you want overlapping frequencies … or to me that suggests unavoidable phase problems no matter what else you do.

I’m no expert on subs so take what I say with a grain of salt. I have a sub on an alternate system, not my regular monitors, and it is an integrated 2:1 system so that was all built in. It seemed like the question needed to be asked though.

If he is wired for the sub to be full range, then the crossover needs to be down where the M-Audio speakers roll off. The spec says 56Hz, but it doesn’t give the variance at that frequency. My best guess would be it’s down at least 3db at 56, so setting the crossover at about 80 as a starting point and tweaking from there will keep the sub from clashing too much with the monitors. The phase switch is an on/off arrangement. On this type of sub, it is generally only used if the sub is on the back wall and firing in the opposite direction of the front speakers. Some subs have variable phase controls for more precise measurement. In this case, the switch, if it is on, flips the phase, hopefully timing the movement of the woofer to be the opposite of the movement of the front speakers, so they don’t cause cancellations when they are facing each other. There are some subs made for home theater use that have incredible room correction software and a calibrated mic to detect the hot and null spots in the room. It"s a pretty much automated process, and since the sub is receiving it’s own information from the processed signal it works very, very well. In this case, the sub is more of an extension of the low end of the monitors, so it just needs to extend the bottom end of the M-Audios a little, rather than replicate explosions.

Yep, I am running the full signal through both. I added the subwoofer to fill out the low end that the monitors can’t handle.

I started as @Cirrus suggested and did the sin wave sweep. I found the BX5’s actually seemed pretty good right down close to their spec. Then I added the subwoofer set at 50Hz and crept up the crossover frequency a bit at a time while doing the sweep. I kept at it until the sweep “felt” the smoothest. (In all honesty though, I couldn’t “hear” the level of the lower frequencies very well so relied on an SPL Meter app on my phone to measure it.)

Then I started listening to different tunes with the sub volume off and crept it up until the monitors had a nice round and full sound. After a few hours and beers I thought it was sounding pretty good, so I figured I’d better knock off and come back for another session with fresh ears and perspective.

In any event, it certainly feels like I’m heading in the right direction. Next I’ll pick up a mic and room correction software.

I really appreciate you all taking the time to lend your experience and offer up your insights. Thanks again!

After a few hours and beers I thought it was sounding pretty good,

Boz has a plug for that. I think it’s called B-Ear Goggles. You set the threshold according to the buzz level you’re looking for and tweak the intoxication level, which uses a very sophisticated combination of side chained fllangeing and crossover variance to get the swirlies.
Have fun, sounds like it’s working out well.