Routing to multiple outs in Kontakt 6

I cannot figure out how to route Kontakt 6 to multiple audio outs in REAPER. I know how to do it in 5, but not 6. In 5 it’s easy: I just select the option for 8, 16 or 64 outs when I load the VSTi. Even in 5, if I do not select the multi-out option when loading the VST there doesn’t appear to be a way to do it. Kontakt 6 does not have the option to load multiple outs when you load the VST.

Anyone know how to do this? CAN you do it in 6? It really doesn’t seem that you can!

I’ve searched google, youtube, even native instruments help forum.
It appears that Native Instruments no longer offers any kind of support. They used to have fairly decent phone support, but that has gone away now. Then they offered text support, but now they only say that they will periodically reply to posts in their user form. I posted yesterday, but no response.

Here’s hoping someone here knows how to do it!

Okay, so, since no one replied I’m hunching I’m not the only one who didn’t know how to do this.

But I figured it out…

It “seems” that the AU version of Kontakt Player 6 is not capable of multi-outs. I might be wrong, but if it is, I can’t figure it out.

The VSTi version of 6 is not labeled 6. It’s just labeled Kontakt (Native Instruments GmbH) (64 out). No options for 8 or 16. That works.

However, if I may ventillate about Native Instruments for a moment! What’s with their product support. They used to have excellent phone support. Now, no support other than posting to user forums. When they do reply, it seems their responses are infrequent and lacking detail, and slow. No more chat support. I searched for 45 minutes and could not find even a user manual for Kontakt 6. Ridiculous. I will never purchase another NI product again. Very disappointed.

End of rant. If anyone does want detailed instructions on how to configure multi-routing for Kontakt, feel free to PM me. Glad to send it your way!

I’ll try. Let me see if I can figure it out. Gimme a sec.

…buy stuff from Sweetwater when you can. They can get you to the NI support line, and they have guys in house that can help you through tech problems.

I loaded Kontakt 6. I was able to get two separate instruments to spill into two separate channels in the Kontakt mixer pretty easy. But I can’t remember how to route a bus in reaper. In Pro Tools you give the bus an input path, Kontakt automatically finds it and then you can sent stuff to it in the Kontakt routing I circled.

Is that where you’re stuck too? That has to be a Reaper problem, not a Kontakt one…because it works perfectly normal in Ableton, Logic, PT, and MainStage. 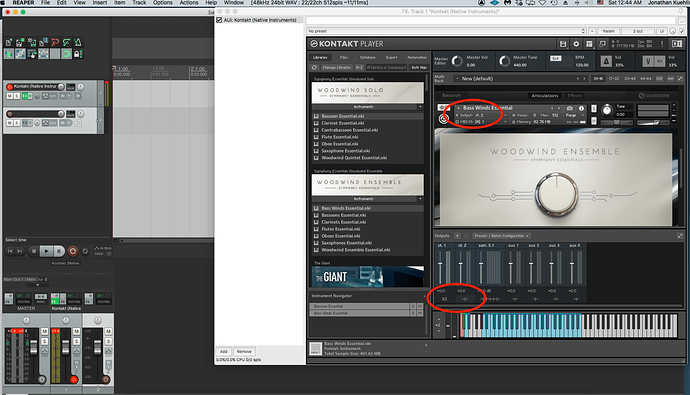 Interesting. So, I have it almost the same, except that in the outputs section in Kontakt (see arrow), the second stereo pair is sent to audio outputs 3/4. In yours it’s routed to -|- 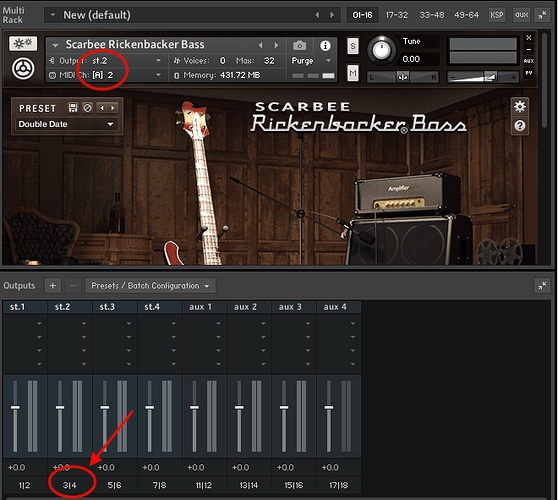 @bozmillar - you use reaper…don’t you? Do you happen to have any idea what’s going on?

Its saying no output

Not sure. You aren’t by chance running the stereo version of kontakt are you? But then you said this:

Kontakt 6 does not have the option to load multiple outs when you load the VST.

That’s what I’m thinking, @bozmillar. I am only able to get one pair of audio outs when using the au version. If I load the VST 64 out VST, no problems. With that I can configure probably 32 pairs of outs of I needed to. With the AU version, just one pair (ie., stereo).