Hi guys,
2021 is the 200th anniversary of Greece’s independance from the Ottoman empire so I decided to do that tribute song.
It’s not compete yet (reverbs & delays are missing for the most part and lead & back vocals will be sung again) but what do you think so far?

This is the original song. 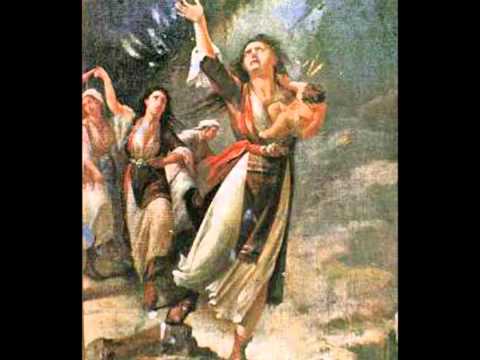 And this is our cover.

I’m listening on an iPad, so I can’t really speak about the finer details of the recording.

I first listened to about 50 seconds of the original recording and then I listened to your cover version. The first thing that struck me was the key change and that your singer sounded more ‘westernized’ to my ear. Neither thing struck me as negative or positive.

I like the rock element you’ve added to this. Nice job!

Thx for the reply Wicked!

Yes, this is intentional. He is a mixture of rock and traditional singer (loves both genres) so I thought he’d fit the needs of the song.

when the overdriven guitars and keyboards/ organ kicked in

Probably some guitar could be introduced from the beginning of the song. It sounds a bit empty to me.

Anyway, still a work in progress!
I appreciate the comments!

Very cool idea @ManAbyss I like this a lot, you have helped our western ears expand which is great. A phrygian mode type guitar solo would be cool too. It seems like you might be able to get the vocal to sit better against the guitar, maybe it’s just me.

2021 is the 200th anniversary of Greece’s independance from the Ottoman empire so I decided to do that tribute song.

It’s not compete yet (reverbs & delays are missing for the most part and lead & back vocals will be sung again) but what do you think so far?

I think I like how the intro is less intense, a bit traditional maybe, and then the guitars come in. I think that part works. Music overall is very nice, good guitars though slightly fizzy/scratchy sounding in the high end. Is it real amps, or sims? Good lead vocal, which may be a keeper, though a few minor ‘pitchy’ places there … so if you redo it and the performance overall is as good as this one that would work. Some (or more) reverb on the lead vocal might be desirable. I do think it should be front and center, though it comes across a bit strong and some space could soften it just a bit. Nice bridge/interlude at 1:28, helps move the song along.

My first impression was an LCR panning scheme, I could clearly hear the center elements (especially vocals) as separate from the wide panned ones like guitars. That’s good for separation and clarity, but almost felt like there was some empty space in the sound stage. Could barely hear any backing vocals so maybe those could be panned out away from the lead a bit? The backing vocals I can hear sound very low in pitch and so it’s hard to tell where they are coming from.

guitars though slightly fizzy/scratchy sounding in the high end. Is it real amps, or sims? Good lead vocal, which may be a keeper, though

It’s Andy James Tonality plugin. I experimented with Slate’s Fresh Air on them. I obviously overdid it

Some (or more) reverb on the lead vocal might be desirable

Of course. Just waiting to get the final take and work on it then.

That’s good for separation and clarity, but almost felt like there was some empty space in the sound stage.

You are right, it is mixed LCR. I’ll try moving things around and see what I come up with!

Thanks so much Stan for the detailed review!

Yep, I share previous comments and I’m really impressed about the cover, it works really well to me.
I really bass guitar tone and performance, nice surprise!

Thx for your kind words.
I think it is much better now that it is reaching the end…
I’ll have it released by 20/03 and I’ll upoload here before that, for a final check!

This is the latest and almost finished mix.
Basically I will be replacing the percussion in the intro with real ones and taking any new of your suggestions in consideration for further tweaking.

Excellent job with this!

I’m really liking the way it sounds and the arrangements and instrumentation. I really can’t find anything to criticize here.

You should be really happy with what you done with this song!

Sounds good to me @ManAbyss, I think the vocal sits better in the mix here, good work!

This is the latest and almost finished mix.

The new mix is louder (or seems so), and it’s hard to compare them. I could do it in a DAW of course, but I’m just listening on a quick comparison. The arrangement or timeline seems a bit different between the two mixes, which made it hard to compare also. The new one seems to have some reverb embellishments, but that could be the loudness increase, so I’m not certain. According to Google, Vrisoules means “fountains”. The song lyrics from the YouTube video seem to be this:

Hello poor world, hello sweet life
and you unfortunate homeland, hello forever!
You have hello fountains, logs, mountains, ridges.
Hello fountains and you Souliotopoulos.
The fish does not live on land, no flowers on the beach
and the Souliotisses do not live without freedom!
As if at a festival, with a lilac blossom,
they descend through Hades, with songs of joy!

Those “Souliotes” resistors sound like my kind of freedom fighters.

It’s actually goodbye or farewell instead of hello.

The fish does not live on land, no flowers on the beach
and the Souliotisses do not live without freedom!

Those “Souliotes” resistors sound like my kind of freedom fighters.

Souliotisses are the women from the town Souli, that in 1803 (18 years before the revolution) in order to avoid falling in the hands of the Turks, they danced hand in hand and jumped of a cliff with their babies in their arms. 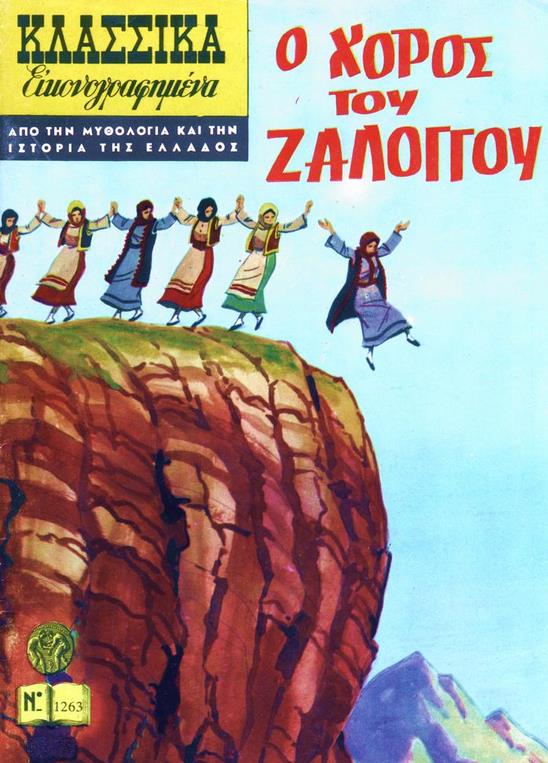 Here is a monument in the area raised in their memory. 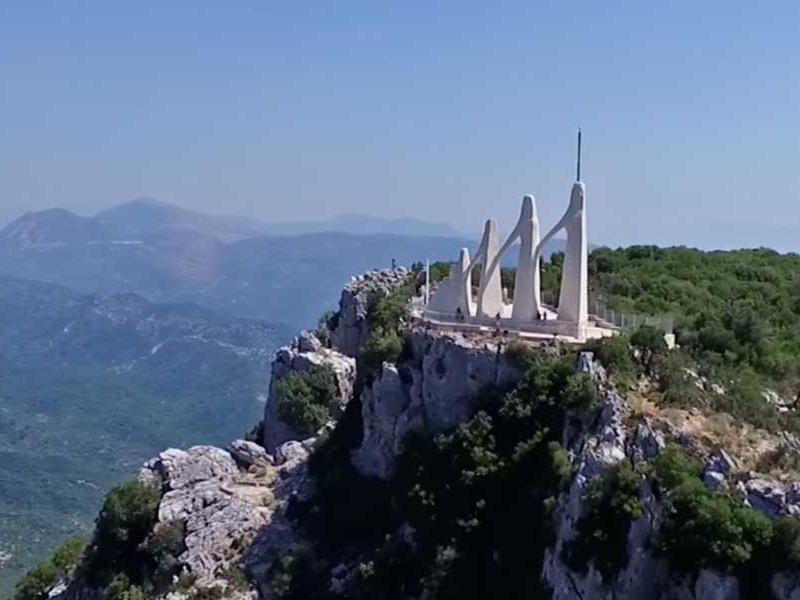 they danced hand in hand

Thanks for the linguistic and historical info! A tragic but inspiring story.

“Give me liberty or give me death!” - Patrick Henry

Here is the final video! 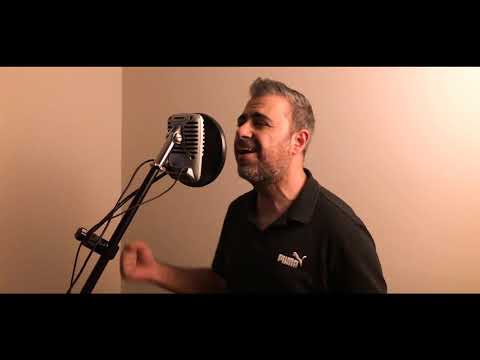 Here is the final video!

This is fantastic, thanks for sharing! Is that you on the keyboards and vocals? If you can, I’d really appreciate any other recording info and techniques you used or developed doing this. The vocal mic looks really interesting, and not something I’m familiar with in America. What is the manufacturer and model, and tonal characteristics? The video is really expressive, nice visuals and nice studio. The guitarist’s JEM guitar, the bassists Marcus Miller signature bass, and the drum kit (not sure of make/model) all look very professional and nice. Also, what is that traditional looking drum that one guy is playing? Is that specifically Greek? It looks like a modern version of a more traditional drum, and it’s a nice addition as well. Great job!

Some of the guys look a bit self-conscious in the video but they’re probably not the poseur type of musicians. I would have preferred a little bit more enthusiasm and acting from some of the guys, but I understand that acting/ performing in videos (and onstage) isn’t everyone’s forte. I still really enjoyed the video!

I listened through my headphones, plugged into my laptop. Sounds really good!

Is that you on the keyboards and vocals?

The lead singer had to use that along with GarageBand through iPad 6th generation because I live in Greece and he in Australia with no home studio.

The video could have been much better as @Wicked says but we invested more on the music. The video got together in 2 days and 100€.

This is a bedir. He also played another one called Riq. Like a more traditional tambourine.

I got you…
Coming soon…

Its look is reminiscent of the old Unidyne 55, yet I had never seen this model before. Everything is going digital, apparently.

I think it does the job very well. The topic of the song is pretty serious anyway, so to see the musicians giving that level of reverence seemed appropriate.

This is a bedir. He also played another one called Riq.

Thanks. It looks like in English they are calling it a bendir, from what I can tell. I think the traditional type instrumentation is very cool.