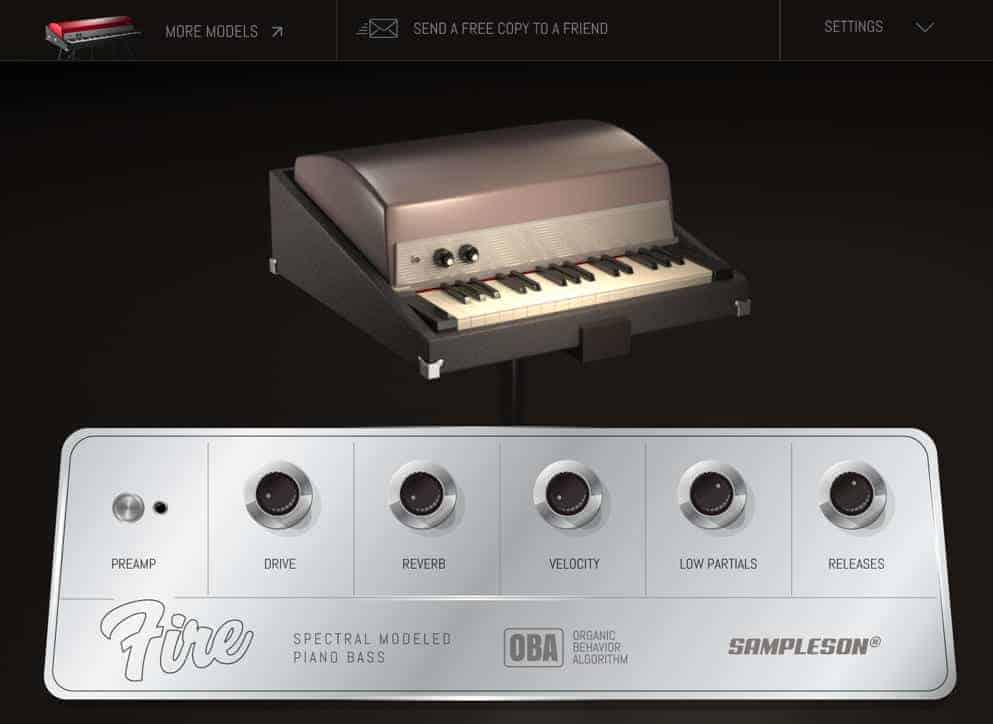 Sampleson has released Fire ($29 value), a virtual instrument which emulates the Rhodes Piano Bass electric piano. The instrument, available in VST and AU plugin formats for compatible digital audio workstations on PC and Mac, can be downloaded...

Thanks for the heads up, Tesgin! It was within my budget, so I downloaded it just to see.

First, it has a rich, punchy analogue tone, reminds me of the Doors Break on Through intro. No presets, but a few knobs for Reverb and Drive and Attack and Release etc.

It does have a crackle like old analogue hardware might have had, which would be nice to remove during solos, but maybe that could be handled by another VST effect, cut out just that specific high sound.

I probably have other synths that can do this particular sound, but for a one trick pony, this is probably usable. Made me feel like Ray Manzarek playing that keyboard bass for a minute!

I grabbed it too. Thanks for the heads up.

If you follow this down the rabbit-hole (as I did, of course

), on their website it states the plugin uses “Spectral modeling synthesis” (SMS). The link even came from their website. You get all the sounds out of a 30MB plugin. They do this by using synthesis rather than a sample database. I think Waves and maybe some others seem to be moving to this model. Interestingly, this model looks to be similar to FM Synthesis which goes way back to the Yamaha DX7 synth in the early 80’s - New Wave synth-pop etc. I’m a little lost on the technicalities … maybe someone can translate the techno-speak, but I found this aspect very interesting. I have yet to try out the plugin, but it looks very interesting.

Spectral modeling synthesis or simply SMS is an acoustic modeling approach for speech and other signals. SMS considers sounds as a combination of harmonic content and noise content. Harmonic components are identified based on peaks in the frequency spectrum of the signal, normally as found by the short-time Fourier transform. The signal that remains following removal of the spectral components, sometimes referred to as the residual, is then modeled as white noise passed through a time-varying f...

It does have a crackle like old analogue hardware might have had, which would be nice to remove during solos, but maybe that could be handled by another VST effect, cut out just that specific high sound.

It sounds like artifacts to me. Pretty horrible. I don’t think I could even use this. It’s got a toy-like chimey noise, not even harmonics … very off key … when the keyboard note is released. The essential keyboard tone itself is quite nice but I can’t live with those artifacts. Maybe someone else can figure out a way to make it work. I also get no MIDI input with the Preamp button enabled (light is red).

EDIT: It seems like the high end of the range and low end sound okay. Anything just below and just above C3 has that chimey release crap though. Very strange. This keyboard only has a limited range of notes focused on the low end, per design I believe. It’s supposed to be a bass instrument.

The essential keyboard tone itself is quite nice but I can’t live with those artifacts. Maybe someone else can figure out a way to make it work.

So I turned the reverb way up and applied a compressor and a guitar effect called CamelCrusher Make Bass and it cleaned up the artifacts quite a bit. Oh, and I turned the track volume down quite a bit, too, because it was just plain loud. Here is a quicko sample of Heartbreaker by GFR. I’m so out of time etc it’s not funny, but I can imagine this being usable in limited ways.

Back then I’m sure there were tons of artifacts to be contended with on something like this.

It definitely has a dirty bass sound that can be layered on other sounds that might need the dirt.